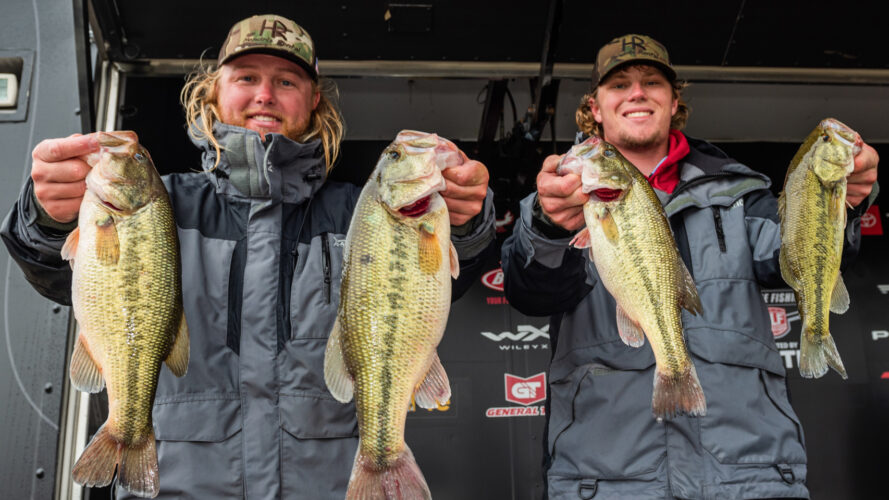 WAGONER, Okla. – After another brutal day on the water, the East Texas Baptist University (ETBU) duo of Kaden Proffitt of Pittsburg, Texas, and Cason Ragsdale of Winnsboro, Texas, extended their lead Wednesday after Day Two of the 2022 Abu Garcia College Fishing Presented by YETI National Championship Presented by Lowrance at Fort Gibson Lake.

The duo grabbed the early lead on Day One by a slim one-ounce margin and narrowly maintained that lead on Day Two, bringing only four bass to the scale weighing 11 pounds, 14 ounces. Their two-day total of 29 pounds, 7 ounces gives them a mere one-ounce lead over the second-place team from Stephen F. Austin – Austin Anderson of Nacogdoches, Texas, and Cal Cameron of Coppell, Texas – who brought a limit to the scale weighing 16 pounds, 6 ounces, to bring their two-day total to 29 pounds, 6 ounces.

“The conditions definitely changed today,” Ragsdale said. “We started off in the morning expecting the fish to do something different with the rain we got last night. I didn’t know if the lake would come up, but knew there would be water running in, so we decided to run the backs of creeks.

“There weren’t as many fish there as we thought there would be, but we ended up catching a 4 ½-5 pounder in one of them,” continued the senior business administration major. “We tried to duplicate that up the lake, but it just didn’t work out. We ended up catching a few fish out of the same areas as we did on Day One, but overall, it was just a tougher day.”

The duo said once they realized the creeks weren’t going to deliver like they had expected, they ended up fishing transition banks again on Day Two.

“Our baits have been pretty different each day,” Proffitt said. “Day One we mostly caught our fish on a crankbait, but today we caught them on several different baits, just fishing the conditions.”

The Tiger team said they expect the conditions to change once again for Day Three, but are optimistic that they can find what it takes to win out on Fort Gibson Lake.

“We’re around quality fish and believe we can go out there and catch another bag tomorrow, if we can just get the right bites,” Ragsdale said. “If we can get another 5-pounder tomorrow, that would go a long way – if we could just get a couple more keepers to go with it. I expect tomorrow to get even more difficult if the sun comes out and the wind dies down like is forecasted. But if it’s difficult for us, that means it will be difficult for everyone, so we’ll see what happens.”

The ETBU bass fishing team is one of the best in the country – previously earning the 2020 Tackle Warehouse School of the Year title – but has yet to win a national title.

“Winning this event would mean everything,” said Proffitt, who is also a senior business administration major. “It would be our school’s first national championship and our first team win in our collegiate series, so it would be huge for us and for the program.”

The full field of 176 teams competed on Tuesday and Wednesday, with only the Top 10 – based on two-day cumulative weight – advancing to Championship Thursday. The National Champions will be crowned Thursday based on the cumulative three-day weight total.

The Top 10 teams that now advance to Championship Thursday on Fort Gibson Lake are:

The final 10 teams will launch Championship Thursday from Taylor’s Ferry North, located on Dock Road in Wagoner at 7 a.m. CT each day of competition. Thursday’s championship weigh-in will be held at Taylor’s Ferry North starting at 3 p.m. and will be livestreamed. Fans are welcome to attend the event or tune in to the weigh-in and follow the online coverage at MajorLeagueFishing.com.