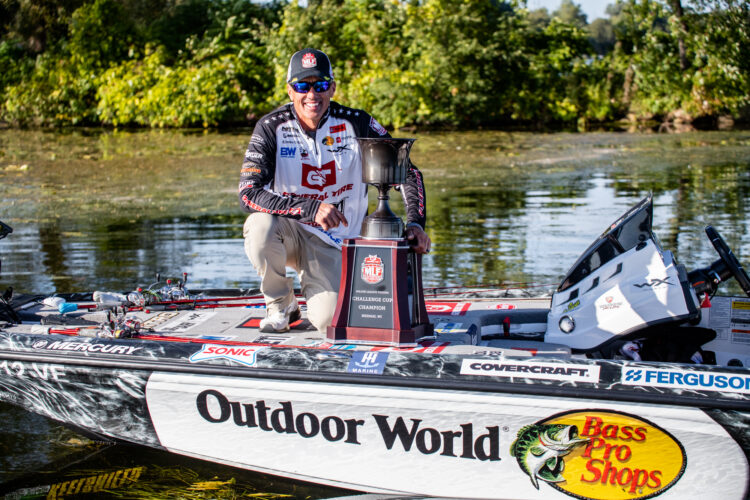 NEENAH, Wis. – MLF pro Edwin Evers of Talala, Oklahoma, caught 18 bass totaling 39 pounds, 5 ounces, to win the Championship Round of the 2021 MLF Lucas Oil Challenge Cup presented by B&W Trailer Hitches in Neenah, Wisconsin, which aired Saturday on the Outdoor Channel. It was the third MLF Challenge Cup title of Evers’ career, and pushed his career earnings to nearly $3.7 million.

“I am so incredibly excited right now,” Evers said in his postgame press conference. “I had a very tough season last year. It was really up and down for me and it was pretty frustrating. So, to start off the 2021 Cup season with a win is super special. And to win it on Lake Winnebago – this is such an awesome fishery. When we were riding to the lake and turned left out of the parking lot, my heart started beating out of my chest because I knew where we were going. I love this lake; it is super special to me.”

Period 1 of the Championship Round was dominated by Evers on the strength of a wacky-rigged 4-inch Berkley PowerBait MaxScent The General worm. All of his bites in the period came off of three docks near the main lake.

“It was a very specific pattern – it had to be docks that were on a point,” Evers said. “It had to have clean water, with a rocky bottom – not sand – and fairly clean with not a lot of grass around. And we talk about the 48 miles of shoreline and more than 23,000 acres of water… I fished every possible scenario where there would be a bass and I caught all of my fish off of just five docks. There might be one more dock out there, but I’m pretty sure those were the only five docks that worked with my pattern that day.”

Without either angler knowing, second-place finisher Mike McClelland also found those exact same three docks during Period 2 and they had reloaded. McClelland caught several key fish on a small spinnerbait and got to within 5 pounds of Evers, however the Oklahoma pro found two similar docks in the southern end of the competition zone and pulled away.

“I guess (Mike) McClelland also caught his fish off of those same docks, but unfortunately for him he was just behind me,” Evers said. “Everything I caught came on that Berkley General. I would have liked to catch them on a spinnerbait or with a vibrating jig, but it just wasn’t working for me. I learned early in the day I had to slow way down and just let that worm soak.”

Evers is now tied with two other anglers for the most Cup wins in MLF history with three – Kevin VanDam and Jacob Wheeler.

“I know I keep saying it, but just I’m super excited,” Evers went on to say. “You never know what tomorrow holds, so to win another one… I will never, ever, take one of these wins for granted. Period. These Cup events are so hard to win – they’re like a mini-championship. I am so fortunate and I’m looking forward to getting home to celebrate this win with my family.”

Lee caught the Berkley Big Bass of the day – a chunky 3-pound, 11-ounce largemouth during Period One.

Overall, there were 44 bass weighing 91 pounds, 13 ounces caught by the final eight pros during the Championship Round of competition on Lake Winnebago.

The 2021 Lucas Oil Challenge Cup Presented by B&W Trailer Hitches was hosted by the Fox Cities Convention & Visitors Bureau and premiered on the Outdoor Channel as six, two-hour original episodes each Saturday afternoon debuting on Jan. 2, 2021, and running through Feb. 6, 2021.

The event was shot over six days in mid-September in Neenah and featured 30 MLF pro anglers visiting Eastern Wisconsin to compete on four different fisheries across the region, including Lake Poygan and Winneconne, Lake Butte des Morts and Lake Winnebago. The fisheries were unknown to the anglers – they did not learn where they were competing until they arrived at the launch ramp each morning of competition.