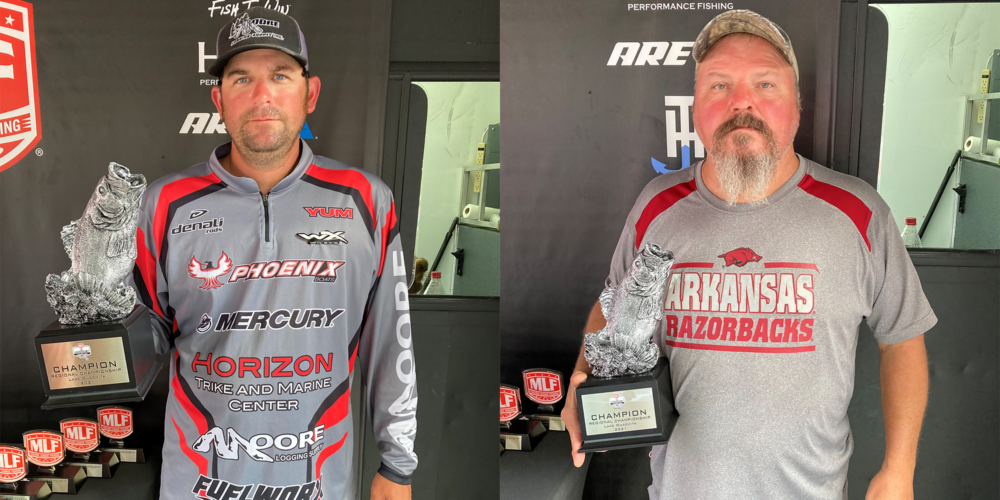 “I’ve been fishing Lake Ouachita for 20 to 30 years – since I was 10 years old,” said Brown, who earned his fourth career BFL victory. “Winning this one and getting back to the All-American is such an unreal feeling. And knowing that it is on Lake Hamilton next year – these are my home lakes, Ouachita and Hamilton. All I wanted was the opportunity to qualify for the event on my home lake.”

Brown said that he keyed in on channel swings, targeting a mixture of brush and rock in 23 to 28 feet of water. Every fish that he caught in this tournament came on a Yum Yumbrella Flash Mob Jr. with Yum Pulse Swimbaits (shad-colored) on ¼ ounce jig heads and a ½-ounce green-pumpkin-colored War Eagle finesse jig.

“It was strictly an offshore deal for me. I never made a cast to the bank,” Brown said. “I ran probably close to 30 places. Sometimes I kept if off the bottom, sometimes I had to keep it on the bottom. It really depended on where the fish were setting up at. On the final day, I’m not sure what happened but they moved to some flatter stuff, and they wouldn’t get off the bottom at all.

“When I got to 10 pounds I knew I had clinched the berth into the All-American, but I wasn’t sure that I had enough to win,” Brown continued. “Then I got to 12 pounds and was feeling a little better, but I still wasn’t comfortable because of the guys behind me. Mike (Brueggen) is an unbelievable angler, and Brian (Bean) is one of the best guys on this lake. I hustled until the very end, because the two guys behind me were very dangerous.”

Brown had qualified to compete in the All-American Championship one time in his career prior, in 2010, on nearby DeGray Lake. Now he’s getting another shot at the big event, and once again he won’t be traveling far from home.

“2010 was a special year, because my dad and I both qualified to compete on the boater side,” Brown went on to say. “This one means a lot because Brian (Bean) and I have traveled together all year and now we’ve both made it. All I wanted was the opportunity. Now, hero or zero, at least I’ve got my shot and I can’t wait.”

Brown took home an extra $7,000 as the highest finishing Phoenix MLF Bonus member. Boaters are eligible to win up to an extra $7,000 per event in each Phoenix Bass Fishing League tournament if all requirements are met. More information on the Phoenix MLF5 Bonus contingency program can be found at PhoenixBassBoats.com.

The 2021 MLF Phoenix Bass Fishing League Presented by T-H Marine consisted of 24 divisions devoted to weekend anglers, with 128 tournaments throughout the season and five qualifying events in each division. The top 45 boaters and Strike King co-anglers from each division, along with the five winners of the qualifying events, advance to one of six Phoenix Bass Fishing League Regional Championships.