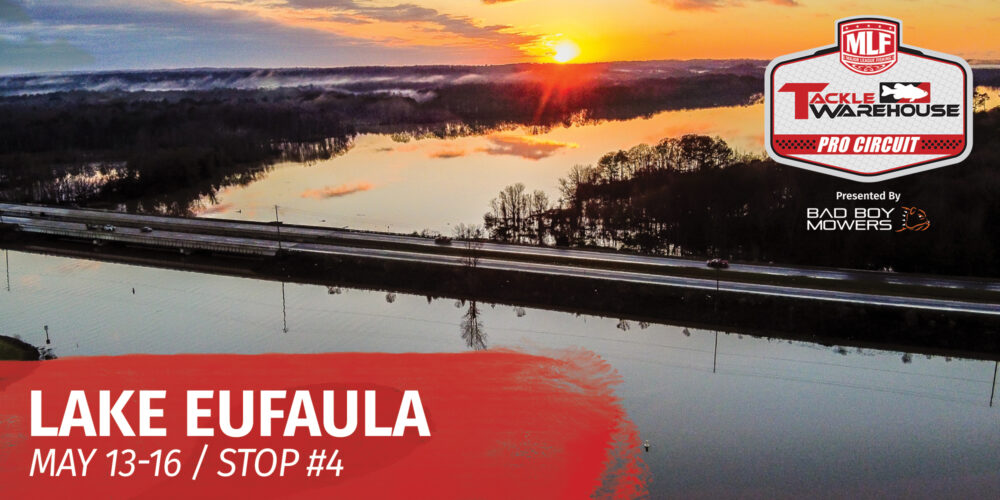 EUFAULA, Ala. – Major League Fishing (MLF), the world’s largest tournament organization, is set to visit Eufaula, Alabama, this week, May 13-16, for the MLF Tackle Warehouse Pro Circuit Presented by Bad Boy Mowers, Grundéns Stop 4 Presented by A.R.E. at Lake Eufaula. This is the fourth event of the 2021 Pro Circuit season – hosted by the Eufaula Barbour County Chamber of Commerce – and offers competitors the opportunity to compete for a total purse of more than $900,000.

In its 26th season, the circuit (formerly known as the FLW Tour) features a roster of the world’s best bass-fishing professionals competing across six regular-season events, each with a top award of up to $135,000. The field also competes for valuable points to qualify for the 2021 Tackle Warehouse TITLE presented by Mercury, the Pro Circuit Championship, and the opportunity to compete for up to $235,000.

This event will mark the sixth time the Tackle Warehouse Pro Circuit has visited Lake Eufaula. The Pro Circuit last visited the Big Bass Capital of the World in May 2015, when North Carolina pro Bryan Thrift played the numbers game, hitting as many solitary objects – stumps, brush piles, rocks, logs – on the bottom of the lake as humanly possible to rack up a four-day total of 69 pounds, 14 ounces and take home $125,000. In 2013, pro Randy Haynes put on an off-shore clinic on Lake Eufaula, winning the event with a four-day total of 79 pounds, 1 ounce – an 11-ounce margin over then runner-up Thrift, who had multiple second-place finishes on Lake Eufaula prior to his 2015 victory.

Pro Clayton Batts of Butler, Georgia, who will be competing in this event, fished his first bass tournament in Eufaula, Alabama, at 10 years of age with fishing legend Tom Mann, and his first big tournament on Lake Eufaula when he was 12.

“This is probably the first big tournament I’ve ever fished on a lake where I’ve grown up fishing,” said Batts. “Lake Eufaula can be a competitive challenge, because the water level and clarity are constantly changing from day to day, so you have to really stay on the fish.

“Guys will have to be versatile during this event – I don’t expect to see one guy fishing one pattern the entire time. Even if they’re on a deep bite, they’re still going to have to find something shallow and have a shad or bluegill spawn or something else to go with it.”

Batts said he anticipates it will take around 20 pounds a day to win the tournament and bringing in consistent weight all four days will be the hardest part of the event.

“This is one of the best times to come to Lake Eufaula because everyone is going to be able to fish their strengths during this tournament,” continued Batts. “If a guy wants to go flip a frog all day he can, or if guys want to fish off-shore or run way up the river – it’s possible to win doing all of it.

“You’re going to have all three phases of pre-spawn, spawn and post-spawn, with the majority of the fish being post-spawn. I think we’ll see guys flipping and fishing shallow with swim jigs, frogs and all your basic power fishing stuff, but we’ll also see guys off-shore throwing big crankbaits, swimbaits, big worms, swim jigs and a variety of baits.”

While the fishery is very versatile this time of year, pro Clabion Johns of Social Circle, Georgia, said he believes anglers will still have to dial in on specific patterns and baits if they want to stay relevant in the competition.

“Lake Eufaula fishes so well early in the year because there are always waves of fish coming to the bank, on the bank and leaving the bank,” said the Georgia pro. “However, usually by the end of April, the fish will go out the deepest I’ve seen on any lake I’ve ever been on – out to water more than 30-feet-deep. Once that last spawn wave hits, it gets tough as nails and the off-shore, deep-fishing guys start crushing it.”

Johns said later in May, with bluegill bedding and mayfly hatches, the bite moves up shallow again – so this will be an interesting time on Lake Eufaula to find the fish between those two stages.

“The shallow guys will have to get real specific to be competitive during this event,” said Johns. “It’s easy to catch a limit on Lake Eufaula, but it’s a lot harder to compete at the top of the leaderboard. The guys that know how to dial them in can catch big bags up there, but one bad decision can blow the entire tournament.”

Anglers will take off at 6:30 a.m. CT Thursday through Sunday from Lakepoint Resort State Park, located at 104 Lakepoint Drive in Eufaula. Weigh-ins will also be held at the park daily at 3 p.m. Fans are encouraged to follow the action online through the MLF NOW! live stream and coverage at MajorLeagueFishing.com.

In Tackle Warehouse Pro Circuit competition, the full field of anglers compete in the two-day opening round on Thursday and Friday. The top 50 pros based on their two-day cumulative weight advance to Saturday. Only the top 10 pros continue competition on Sunday, with the winner determined by the heaviest accumulated weight from the four days of competition.

The MLF Tackle Warehouse Pro Circuit Presented by Bad Boy Mowers, Grundens Stop 4 Presented by A.R.E. – Lake Eufaula event will feature live on-the-water coverage and a two-hour action-packed television show that will premiere on the Outdoor Channel on Sunday, August 22 from 7 to 9 a.m. ET and re-air on the Sportsman Channel this fall. Weigh-ins will be streamed daily and fans can catch live on-the-water action all day Saturday and Sunday, May 15-16 on MLF NOW! beginning at 7 a.m. CT at MajorLeagueFishing.com.

The 2021 season culminates with the Tackle Warehouse Pro Circuit TITLE presented by Mercury, where the top 48 pros in the points standings plus, 2020 TITLE Champion Rusty Salewske of Alpine, California, and 2020 Angler of the Year Ron Nelson of Berrien Springs, Michigan, will compete for as much as $235,000. The 2021 TITLE will be on the Mississippi River in La Crosse, Wisconsin on Aug. 17-22, and is hosted by Explore La Crosse.