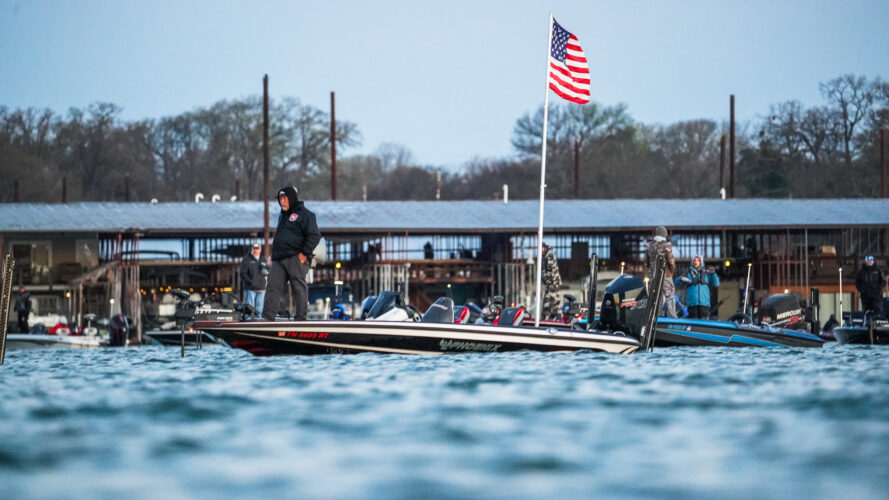 “I think this tournament is going to hit at a pretty good time,” said Bass Pro Tour pro Jeff Kriet of Ardmore, Oklahoma. “The water has really started warming up in the last week or so and there’s a good chance the fish will be moving up on to beds by next week.

“Texoma has always been a good lake, but it has greatly improved and has been fishing very well the last several years,” continued the Mercury pro. “The fish are big and healthy, and I think this will be a very good tournament with a lot of fish caught.”

Kriet said he expects this to be a shallow-water tournament on the southern Oklahoma and northern Texas fishery – that the tournament will be won in five feet of water or less – and believes sight-fishing will be key in this event.

“A lot of fish will be spawning around marinas and behind docks, so that will be a big player,” Kriet said. “Guys should also look for rocks, stumps and pretty much any available cover, because there’s a good chance there’s going to be a bass on it when they are there.

“I expect to see a lot of fish caught flipping and pitching soft plastics, with a wacky worm, and shallow-water stuff, like ChatterBaits and spinnerbaits are definitely going to play.”

With more than 89,000 acres to fish on Lake Texoma, Kriet said the lake offers a lot of diversity for the field.

“Anglers have options,” he said. “They can fish stained water further west with less boat traffic, or they can go way up the east side and have a little bit more water to themselves – but I feel like the tournament will probably be won mid-lake or on the southern end, sight-fishing.”

With the warmer weather trending, Kriet said he expects to see pretty good numbers of fish and heavy weights throughout the event.

“I figure it will take 55 pounds to win the three-day tournament,” Kriet said. “It won’t surprise me to see a 25-pound bag one day, followed by an 18-pound bag, so probably an average of 20 pounds per day to come out on top.”

Anglers will take off daily at 7:30 a.m. CT from Catfish Bay Marina in Kingston. Weigh-ins will also be held at the marina and will begin at 3:30 p.m. Fans are welcome to attend the event or follow the action online through the MLF NOW! weigh-in broadcasts and daily coverage at MajorLeagueFishing.com.