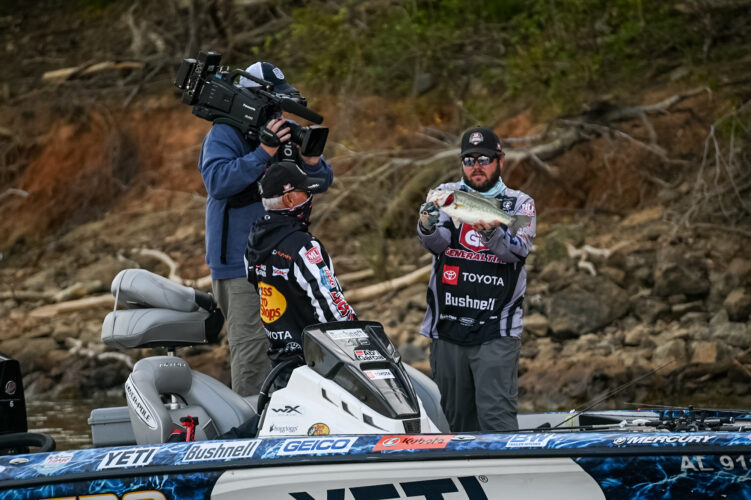 RALEIGH, N.C. – The big bass were chewing on Jordan Lake, Friday. MLF pro Michael Neal of Dayton, Tennessee, caught 13 scorable bass weighing 51 pounds, 15 ounces to jump out to the early lead on Day 1 for Qualifying Group A at the General Tire Heavy Hitters Presented by Bass Pro Shops. The six-day all-star tournament showcases 40 anglers that qualified from the 2020 season competing for more than $535,000, with a top prize of $100,000 going to the winner of the event, and Big Bass Bonuses during the competition with payouts of $25,000, $50,000 and $100,000 being awarded for the single biggest fish in the Qualifying, Knockout and Championship rounds.

Neal will bring a 5-pound, 3-ounce, lead into Sunday’s second day of competition for Group A. In second place on the SCORETRACKER® leaderboard is pro Boyd Duckett of Guntersville, Alabama, who has 24 top-10 finishes and more than $1.8 million in career winnings, who caught 12 bass totaling 46-12. Fellow Guntersville, Alabama pro Chris Lane sits in third place, 6 pounds, 8 ounces back of Neal with 12 bass weighing 45-7.

“Today was awesome – everything worked out just like I thought it would,” said the 29-year-old Neal, who has more than $1 million in career earnings. “Not catching a bass in the second period was disappointing, but at the same time I had some other ideas that I thought might work and it allowed me to get those our of the way.

“The fish are still much more prespawn than I thought that they would be,” Neal continued. “The water temperature is over 70 degrees, and I would have thought that the fish would be in the backs of the creeks and bays and pockets trying to spawn. But, when you look at them, they’re all real fat, healthy, big fish and about to bust. And they’re still on more of what I would call wintertime or early spring jerkbait-type looking banks, and I’m really not sure why they are still there.”

Neal said that every bass that he landed Thursday came on a Z-Man ChatterBait.

“I caught everything today, every single one of them, on a ½-ounce ChatterBait,” Neal said. “I threw it on 7-foot, 2-inch medium-heavy Denali Kovert rod with 20-pound Sunline Sniper line. These are big fish, and you don’t want to come out here with light line.

“Jordan is a great lake and I can’t wait to get back out here Sunday,” Neal went on to say. “It’s going to be another knockdown, drag-out fight all the way to the end. I’ve got a good pattern, and I really don’t think it’s going to go anywhere. I’m hoping that the wind will blow a little more like it did this afternoon – it really helped the bite.”

Second-place angler Boyd Duckett would almost assuredly have had the day one lead over Neal if he hadn’t lost some key fish.

“It was a very frustrating day for me. I lost a lot of big fish today – I think I lost around 23 pounds, visibly, and that hurts a lot,” Duckett said. “I had a good lead at one point, but that’s how it goes some days. The good news is that I had a great day and I’m right there at it in second place. It’s all going to come down to what happens on Sunday.”

Third-place pro Chris Lane said he had a very fun day on the water, despite having to fish much slower than usual.

“Anytime you’re in contention to win the round after the first day, that’s a good thing,” Lane said. “I think the biggest for me today was that I had to fish slow. And that’s very hard to do when you’re on the clock. I was casting a Bass Pro Shops soft plastic on a 7-foot, 3-inch medium-heavy Duckett rod and just having fun. We were able to catch a lot of really nice fish, and I think moving forward it will continue to be good.”

The standings for the 20 pros from Qualifying Group A after Day 1 on Jordan Lake are:

Overall, there were 173 bass weighing 591 pounds, 10 ounces caught by the 20 pros on Thursday, which included two 7-pounders, six 6-pounders and ten 5-pounders caught from Jordan Lake.

Gagliardi weighed in the biggest bass of the day Thursday, a 7-pound, 15-ounce largemouth that he caught flipping a creature bait during Period 2. If Gagliardi’s fish remains the largest bass weighed by Group A after the conclusion of the Qualifying Round on Sunday, he will take home a $25,000 Big Bass Bonus. Big Bass Bonuses are awarded throughout the competition, with payouts of $25,000, $50,000 and $100,000 being awarded for the single biggest fish in the Qualifying, Knockout and Championship rounds

The 20 Anglers in Group A compete in their two-day qualifying round on Jordan Lake on Friday and Sunday – the 20 anglers in Group B on Falls Lake on Saturday and Monday. After each two-day qualifying round is complete, the anglers that finish in 2nd through 10th place from both groups advance to Tuesday’s Knockout Round on Shearon Harris, while the winner of each group advances directly to Wednesday’s Championship Round on Shearon Harris. In the Knockout Round, weights are zeroed and the remaining 18 anglers compete to finish in the top 8 to advance to the Championship Round. On the final day Championship Round, weights are zeroed and the highest one-day total wins.

The MLF NOW!® broadcast team of Chad McKee, Marty Stone and J.T. Kenney will break down the extended action each day of competition from 7:15 a.m. to 4:00 p.m. MLF NOW!®  will be live streamed on MajorLeagueFishing.com. and the MyOutdoorTV (MOTV) app.