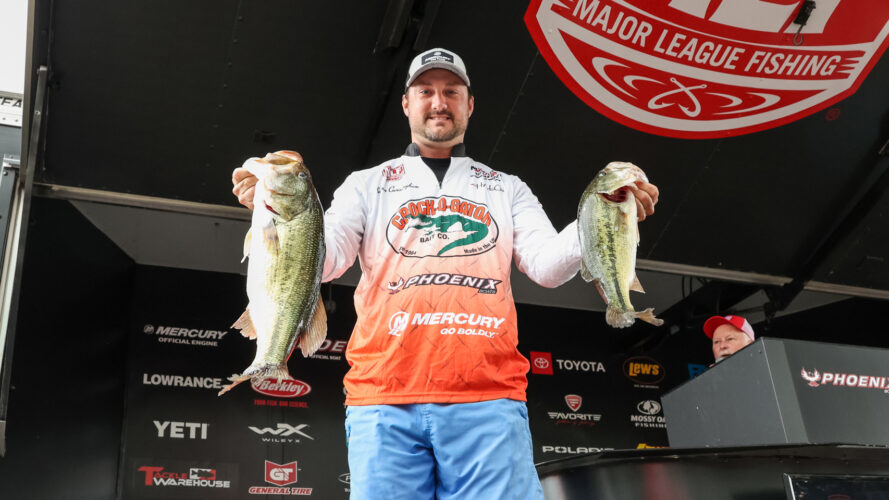 HOT SPRINGS, Ark. – Despite only getting five bites throughout the day, they were definitely the right quality of bites. Anchored by a beautiful 6-pound, 11-ounce Lake Hamilton largemouth, boater Connor Cunningham of Springfield, Missouri, brought a five-bass limit to the scale Thursday weighing 17 pounds, 8 ounces, to jump out to the early lead at the 39th annual Phoenix Bass Fishing League All-American Championship on Lake Hamilton Presented by T-H Marine in Hot Springs, Arkansas.

Cunningham will start Day 2 with a 4-pound, 10-ounce advantage over second-place boater Ryan Powroznik of Hopewell, Virginia, who caught five bass totaling 12 pounds, 14 ounces. Of the 98 competitors – 49 boaters and 49 Strike King Co-anglers – competing in the event, all 98 weighed in at least one fish and 63 anglers weighed in a five-bass limit.

The three-day tournament, hosted by the Arkansas Department of Parks and Tourism and Visit Hot Springs, features the nation’s best weekend grassroots anglers competing for a top prize of up to $120,000, and a top prize of $50,000 for the winning Strike King co-angler.

“Well, my day looks a lot better on paper – I only got five bites today – and fortunately I was able to catch them all,” said Cunningham, who qualified for this event from the Phoenix BFL Ozark Division. “I bounced around a lot and caught my fish on a variety of techniques. None of those fish in my bag knew each other, let’s say that. I caught my fifth keeper when they were out schooling, about 1:30 this afternoon.”

Cunningham said that he didn’t have a whole lot of experience on Lake Hamilton, but it fishes very similar to his local waters back home.

“I was able to come down to Lake Hamilton just a couple of times before it went off limits, and other than that I’ve never seen the place. It does fish very similar to Lake of the Ozarks back home, though.”

Cunningham politely declined to mention any specifics in regard to his baits and techniques he used Thursday, including the details on his big 6-11 kicker, but he did say that his plan for tomorrow was going to be to continue to grind away and bounce around covering water.

“It took me two hours this morning to catch one, then it was something like one an hour from then on,” the Missouri boater said. “I don’t have anything else, so I’m just going to roll with the same thing. I could come in with zero tomorrow, but in a tournament like this you have to swing for the fence. So that’s what I’m going to do.”

Although he didn’t have as much weight, second-place boater Ryan Powroznik caught many more bass overall than Cunningham did.

“It took me a while to get going, but I think I caught around 25 throughout the day,” Powroznik said. “I caught my fish offshore, fishing brush piles and some rough spots off the bank. The weather conditions were not what I wanted, and I lost a few fish as well. But overall, I’m pleased.”

Powroznik said that he caught his fish on finesse-style baits in 10 to 18 feet of water.

The Top 20 boaters after Day 1 of the All-American on Lake Hamilton are:

“I had a limit by 9 a.m. this morning,” Rusher said. “I was able to get a limit really before the rain started and once that rain started it really slowed down for me. I culled a few times once the rain let up.”

Rusher, like Cunningham, wasn’t ready to give anything away about how he was catching them. However, he did admit what wasn’t really working for him to start out his day.

“I was fishing pretty slow today,” Rusher said. “I tried to catch them on topwater this morning and I just couldn’t make it work. I figured out one bait that I could get them to bite and that’s the bait I stuck with all day long. I won’t say what it was, but there was a lot of shake, rattle and roll in my presentation.”

The Top 20 Strike King co-anglers after Day 1 of the All-American on Lake Hamilton are:

The full field of 49 boaters and 49 Strike King co-anglers compete on Days 1 (Thursday) and 2 (Friday) of the event. After two days of competition, the field is cut to just the Top 10 boaters and co-anglers, based on two-day total cumulative weight, and the final 10 anglers compete on Championship Saturday. The boater and co-angler that catch the heaviest three-day total weight will be crowned the 39th Phoenix Bass Fishing League All-American Champions.

Anglers launch each day at 6:30 a.m. CT from the Andrew Hulsey Fish Hatchery, located at 350 Fish Hatchery Road in Hot Springs. Weigh-in each day will be held at the launch location and will begin at 2:30 p.m. Fans are welcome to attend all launch and weigh-in events and encouraged to follow the event’s online coverage at MajorLeagueFishing.com.

The 2021 Phoenix Bass Fishing League Presented by T-H Marine was a 24-division circuit devoted to weekend anglers, with 128 tournaments throughout the season, five qualifying events in each division. The top 45 boaters and Strike King co-anglers from each division, along with the five winners of the qualifying events, advanced to one of six Regional Championships where they competed to finish in the top six, which then advanced them to compete in the Phoenix Bass Fishing League All-American.