158 Professional Anglers to Launch 27th Season and Compete for Top Prize of up to $135,000 and Total Season Purse of More Than $6 Million 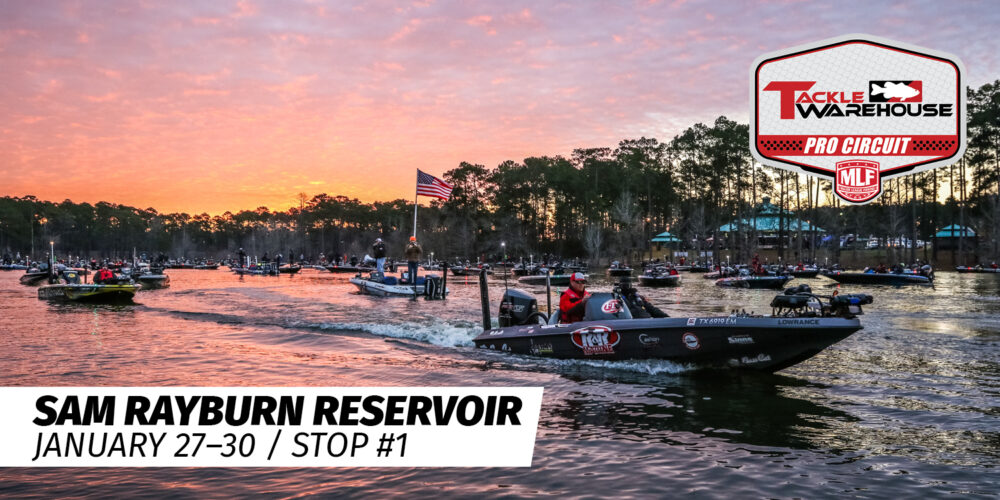 BROOKELAND, Tx. – Major League Fishing (MLF), the world’s largest tournament-fishing organization, is set to return to Brookeland, Texas next week, Jan. 27-30, for the season-opening MLF Tackle Warehouse Pro Circuit Guaranteed Rate Stop 1 at Sam Rayburn Reservoir Presented by Ark Fishing. In its 27th season, the Pro Circuit features a roster of 158 of the world’s best bass-fishing professionals competing across six regular-season events, each with a top award of up to $135,000.

Hosted by the Jasper County Development District, the tournament marks the first of six regular-season Pro Circuit events and offers competitors a total purse of more than $850,000. The field is also competing for valuable points to qualify for the 2022 Tackle Warehouse TITLE Presented by Mercury, the Pro Circuit Championship – held this year on the St. Lawrence River in Massena, New York – and the coveted Pro Circuit Angler of the Year (AOY) title.

“The Jasper County Development District is proud to welcome the Tackle Warehouse Pro Circuit to Lake Sam Rayburn,” said Gary Collins, President of Jasper County Development District. “This event is Stop 1 of one of the most prestigious and competitive national bass tournament circuits in existence today. The television broadcast keeps the viewer in the action throughout the tournament, and the fishing tips viewers learn from these pros are beneficial to every weekend fisherman.  A top-notch event, on a great lake, promoted by great sponsors. What more could fisherman and viewers ask for from an event during the spring on Lake Rayburn.”

MLF has held 122 tournaments on the renowned bass fishery over the past 28 years, a staggering number that places it neatly inside the top 10 fisheries most visited by MLF.

The event will mark the sixth time the Tackle Warehouse Pro Circuit has competed on Sam Rayburn Reservoir. Pro Terry Bolton of Benton, Kentucky, holds the record-winning weight on the fishery, bringing home $125,000 in 2019 with a four-day total of 91 pounds, 3 ounces. Pro Nick Lebrun of Bossier City, Louisiana, weighed in a total of 90 pounds, 7 ounces that same year, good for second place. The biggest bass weighed on Sam Rayburn in Pro Circuit history goes to former pro Andy Wicker of Pomaria, South Carolina, who reeled in an 11-pound, 2-ounce whopper in 2019.

The star-studded field of pros includes local anglers Dakota Ebare of Brookeland, Texas, Lendell Martin, Jr. of Nacogdoches, Texas, Tommy Dickerson of Orange, Texas and rookie River Lee of Nacogdoches, Texas, along with a full field of returning pros and 22 rookies. They will be joined by 16 anglers that also compete on the Bass Pro Tour, including reigning 2021 Pro Circuit AOY Michael Neal of Dayton, Tennessee, and 2021 Lake Okeechobee Pro Circuit champion Skeet Reese of Auburn, California.

In Tackle Warehouse Pro Circuit competition, the full field of 158 anglers compete in the two-day opening round on Thursday and Friday. The top 50 pros based on their two-day cumulative weight will advance to Saturday. Only the top 10 pros, based on cumulative weight from the first three days, will continue competition on Championship Sunday, where weights will be zeroed and anglers will compete in a one-day shootout for the grand prize of up to $135,000, including the lucrative $35,000 Phoenix MLF Bonus for qualified anglers.

Tackle Warehouse Pro Circuit angler and accomplished Sam Rayburn pro Dicky Newberry of Houston, Texas, said he spent a lot of time on the reservoir prior to the off-limits cutoff.

“Sam Rayburn has got a tremendous number of fish in it – a huge population of bass, and a lot of really healthy, large bass,” said Newberry. “Unfortunately, the grass is really suffering and there’s less hydrilla in the lake than we’ve had in the past 25 years during this time of year. It can only be found in select areas of the lake, therefore, the fish that are using the grass are getting a lot of pressure right now, which will greatly affect the anglers that choose to fish the grass.”

Despite that fact, Newberry said he believes anglers will be able to play to their strengths and catch fish in a variety of ways, from 30 feet deep all the way up to 2 feet of water.

“It’s going to be wide open during this event and guys will be able to fish pretty much any strength they have,” said Newberry.

Newberry said the Bill Lewis Rat-L-Trap in Rayburn Red is always one of the most popular baits on the reservoir this time of year and he suspects it will be one of the big players in this tournament, along with an assortment of Carolina rigs, football jigs and large crankbaits.

Newberry also believes that the weights being zeroed on Day 4, a new rule change for 2022, will be a huge factor during the event and will change the strategy for the anglers.

“I think a good 42 to 44 pounds after Day 3 will make the Top 10,” said Newberry. “The last day is anybody’s guess, but I suspect a solid bag in the mid-20’s on the final day will be strong. This lake can produce 40-pound stringers, but we are going to be here during a lot of the major local tournaments, so that could cut down on a lot of the large stringers.”

Anglers will take off at 7 a.m. CT, Thursday through Sunday, from the Umphrey Family Pavilion located at 5438 RR 255 in Brookeland. Weigh-ins will also be held at the pavilion daily at 3 p.m. Fans are welcome to attend the event or follow the live on-the-water action all four days of competition online on MLF NOW! beginning at 7:30 a.m. CT at MajorLeagueFishing.com.

The MLF Tackle Warehouse Pro Circuit Guaranteed Rate Stop 1 at Sam Rayburn Reservoir Presented by Ark Fishing will feature live on-the-water coverage and a two-hour action-packed television show that will premiere on the CBS Sports Network on Saturday, July 2 from 7 to 9 a.m. ET.

The 2022 season culminates with the Tackle Warehouse TITLE Presented by Mercury, the Pro Circuit Championship, where the top 48 pros in the points standings, along with 2021 TITLE Champion Jimmy Washam and 2021 AOY Michael Neal, will compete for a top prize of $235,000. The 2022 TITLE will be on the St. Lawrence River in Massena, New York, Aug. 16-21, and is hosted by the Town of Massena.