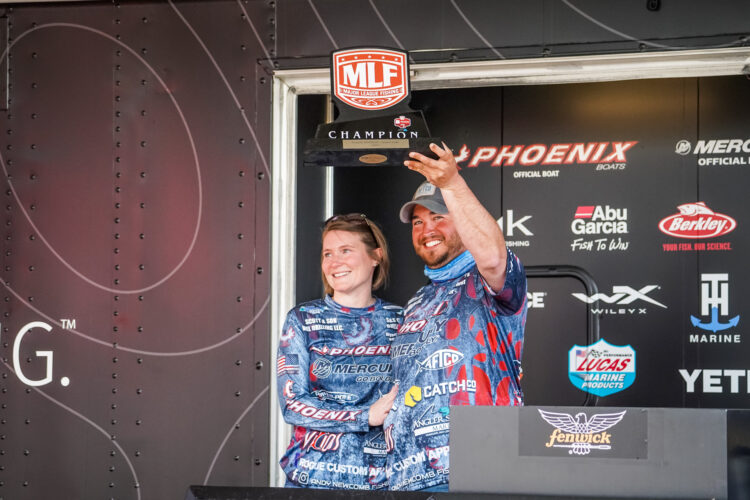 GROVE, Okla. – Toyota Series angler Andy Newcomb of Camdenton, Missouri brought a five-bass limit to the scale Saturday weighing 15 pounds, 11 ounces to win the three-day Toyota Series presented by A.R.E. at Grand Lake presented by Fenwick in Grove, Oklahoma. Newcomb’s three-day total of 15 bass weighing 52-13 earned him the win by a 11-ounce margin over second-place angler Chris M. Jones of Bokoshe, Oklahoma and earned Newcomb the top payout of $76,500 in the second tournament of the 2021 Toyota Series Plains Division, which includes a $35,500 Phoenix MLF BIG5 Bonus.

Finishing second on Lake of the Ozarks back in March, Newcomb dropped 17 pounds, 13 ounces on Day One of the event to sit in ninth place. He backed it up on Day Two with 19-5 to take the lead, followed by 15-11 on Day Three to seal the Toyota Series win. With 52-13 over the three-day event, Newcomb was able to bring home the big trophy and over $76,000.

“It’s incredible,” Newcomb said of his win. “I haven’t really had a chance to think about it, but just the fact that I was able to edge out Chris (Jones) is incredible – Chris is the man. Eric Olliverson is a buddy of mine and he catches them everywhere. I’ve worked hard at it and I’ve never felt I was truly at that level. So, to win one feels really, really good.

“Thursday I caught all of my fish off chunky gravel and caught all of my good ones halfway back in pockets. If I went back further I could catch small keepers and towards the main lake I couldn’t catch anything.”

With no wind, warmer temperatures and clear skies on Day 2, Newcomb said he tried to force his “chunky gravel” pattern, but to no avail.

“I tried for a long time to make that pattern from Day 1 work,” he said. “Finally, I rolled up to a bluff and I thought that it looked like a place I could catch one.

“I threw out there and had one hit it and that changed my whole tournament. Even though I didn’t land it, just that fish biting made me think, ‘there’s fish here.’ I went a little further down and had another bite and told my co-angler we were going to camp there. In the last hour and a half of the day, they turned on. I went from 9 pounds to over 19 in a hurry.”

Newcomb said as far as baits go, he stuck with Grand Lake staples ­– a jig and a spinnerbait.

“In cleaner water, I was either throwing a BOOYAH Covert Spinnerbait with a small, gold Colorado blade and bigger, silver willow blade or a chartreuse War Eagle spinnerbait – I swapped the painted blades out for smaller willow blades so I could fish it a little faster, which made the fish swallow it  instead of just biting it.”

Newcomb said he also added a BioSpawn ExoSwim (Feider shad) to his spinnerbait for extra bulk and dyed the tail chartreuse. He threw his blades on a 7-4 Daiwa Tatula Elite vibrating jig rod with an 8.1:1 Daiwa Tatula reel spooled with 17-pound-test Vicious Pro Elite fluorocarbon.

A ½-ounce Apex Tackle Company Dirk’s Jig got a key bite on Day 2 but did all of the heavy lifting on the final day. He put a Zoom Ultravibe Speed Craw on the back and pitched it to any rock or wood he could along the bank. His jig tackle consisted of a 7-foot, 1-inch Tatula Elite rod, with the same Tatula reel as the spinnerbait and he ran 20-pound Vicious Pro Elite fluorocarbon on it.

“It’s a very small jig, with just a few strands of skirt,” Newcomb said. “Color didn’t seem to matter. If you got it in front of one they would bite, but they just ate funny. I think I weighed every fish today on the jig and most everything the first two days on a spinnerbait.”

With the trophy in hand, Newcomb said he’s happy that his fish-to-win mentality finally paid off on the big stage and he’s hoping it may lead to an even bigger stage soon.

“At the end of the day, whether I win or lose, I know I did everything I could to win,” he said. “Sometimes it doesn’t work out, but when it does, boy it feels really, really good.

“I want to win everything that I’m in, but at the end of the year if I’m in the top five in points it’ll be a dream come true. I want to do this for a living but haven’t really had the financial means to pursue it. So, if I could [qualify for the Tackle Warehouse Pro Circuit] first try and not have to go through the grind and come up with the money, I think it would change my life.”

In the Strike King co-angler division, the $100 Day One Berkley Big Bass award winner was John Bowdre of Hernando, Mississippi, with a 6-pound bass, 8-ounce bass, while the $99 Day Two award went to Felton with a 6-pound, 14-ounce bass.