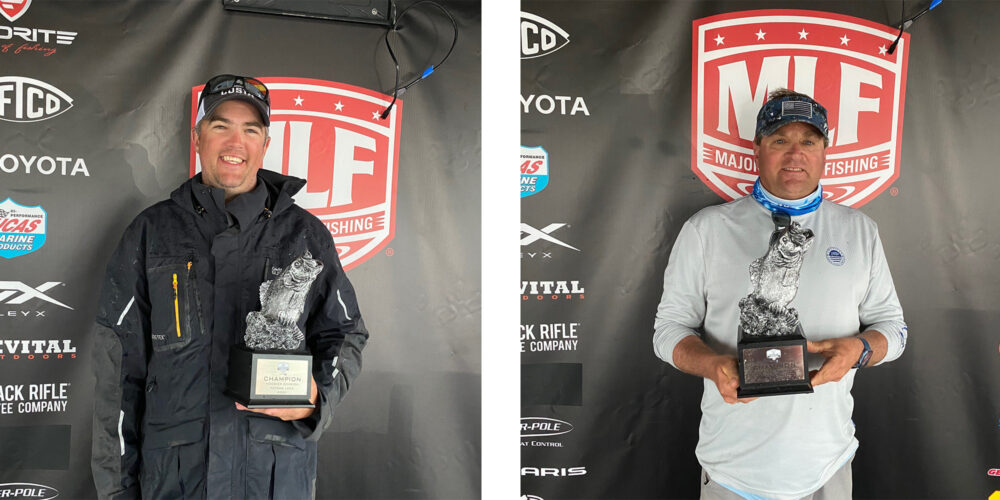 “I had 140 waypoints marking bed fish that were spawning, so I just ran through them and caught the ones I could,” Bissonett said. “Some you could catch on one cast, and some you’d have to work on a while.

“My last fish I had tried for an hour on Thursday to get it to bite and on Friday for an hour to get it to bite during practice,” Bissonett said. “At the end of the day during the tournament I didn’t have any other big ones located that would help me, so I ran back up the river and went back to that fish and caught it within 10 minutes.”

“This feels really good,” Bissonett said. “I had a really good chance to win this same event last year, but I ended up coming in fourth. It just wasn’t my day. It was a day where everything went wrong. Every single day since then I have thought about coming back and winning. So, to finally get to go back and win feels great.”

Klosterman and boater Jamil Abdullah of Indianapolis, Indiana, both caught largemouth that weighed 5 pounds, 10 ounces that were the heaviest of the event in the Boater Division. Klosterman and Abdullah split the day’s Berkley Big Bass Boater award of $590.

James McWhorter of Hamilton, Ohio, caught the largest bass in the Co-angler Division, a fish weighing in at 4 pounds, 14 ounces. The catch earned him the day’s Berkley Big Bass Co-angler award of $290.

The 2022 Phoenix Bass Fishing League Presented by T-H Marine is a 24-division circuit devoted to weekend anglers, with 128 tournaments throughout the season, and five qualifying events in each division. The Top 45 boaters and Strike King co-anglers from each division, along with the five winners of the qualifying events, will advance to one of six Regional Championships where they are competing to finish in the top six, which then qualifies them for one of the longest-running championships in all of competitive bass fishing – the Phoenix Bass Fishing League All-American. The 2022 All-American will be held June 2-4 at Lake Hamilton in Hot Springs, Arkansas, and is hosted by the Arkansas Department of Parks and Tourism and Visit Hot Springs.