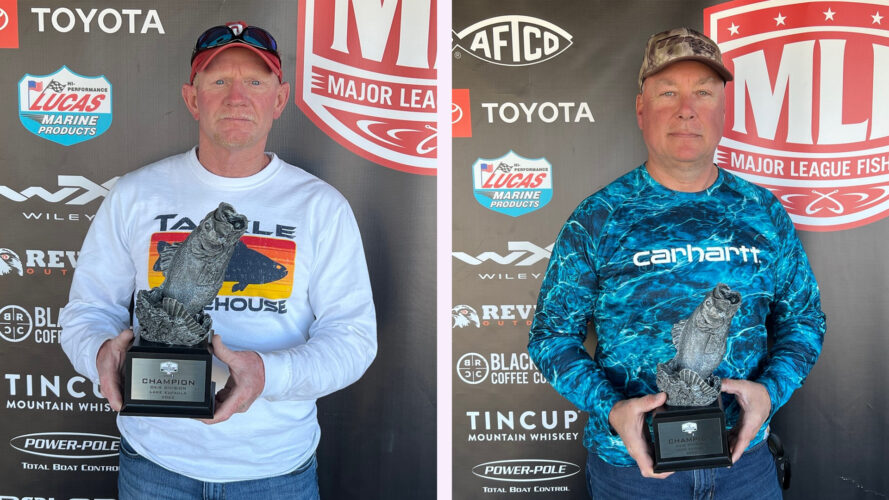 “I had an awesome co-angler, and I told him we were going to make a run, put the trolling motor down to save fuel and put our heads down and fish,” Sweitzer said. “I told him you can’t win with the big motor and running.”

Sweitzer said he started in 30 feet of water fishing an Alabama-rig to target bait balls and caught two 5-pounders in the first 30 minutes, but then the bass started to shy away from their offerings.

“That’s when the day got long,” Sweitzer said. “I didn’t have another fish until 1:30 p.m. Then I pulled up on a stretch, got a jerkbait out and caught three more keepers to put in the boat.”

Sweitzer said his five fish that he weighed in were the only fish he caught during the tournament. In addition to the umbrella-rig, Sweitzer said he used a Berkley deep-diving crankbait as well as a 6th Sense Jerkbait to target bass on ledges.

“This was the first BFL tournament I’ve ever fished,” Sweitzer said. “I kept telling my wife, ‘I just want one of those trophies someday.’ She said, ‘You can’t do it unless you fish it.’

Chris M. Jones had a 9-pound largemouth that was the heaviest of the event in the Boater Division and earned the day’s Berkley Big Bass Boater award of $740.

Andrew Workman of Stilwell, Oklahoma, caught the largest bass in the Co-angler Division, a fish weighing in at 6 pounds, 8 ounces. The catch earned him the day’s Berkley Big Bass Co-angler award of $370.