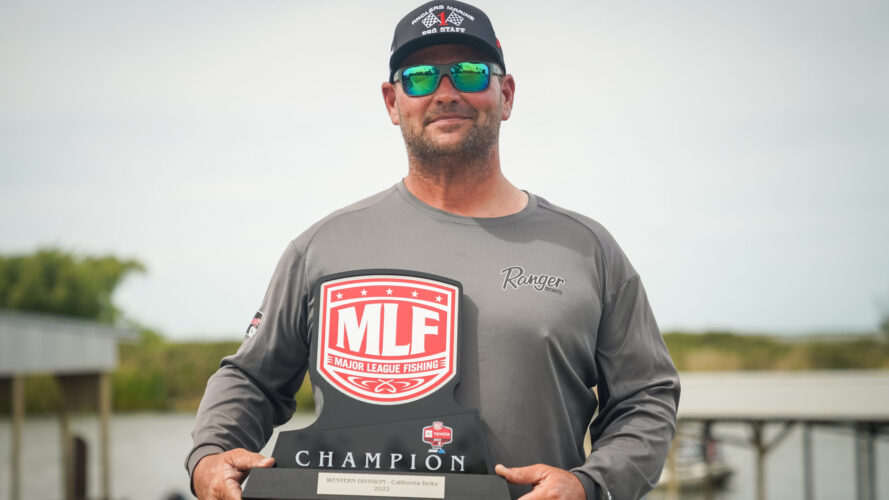 BETHEL ISLAND, Calif. – Pro Stephen “Bub” Tosh, Jr., of Modesto, California, brought a five-bass limit to the scale Friday weighing 17 pounds, 15 ounces to win the Toyota Series Presented by A.R.E. at the California Delta and earn the top payout of $25,604. Tosh’s three-day total of 15 bass weighing 59 pounds even earned him the victory by a 4-pound, 3-ounce margin over second place pro Lane Olson of Forest Grove, Oregon, who caught 15 bass weighing 54-13 to finish second and earn $9,922.

To do so, Tosh said he combined a duo of baits that are out of production with a modern-day staple.

“I had two 6-pounders this week and a couple of 5-pounders, but no giant fish,” he said. “Most of my fish came on a Transporter Frog made by Paycheck Baits that I designed years ago. They haven’t made them in years, but they’re going for $60 to $80 on eBay.”

Tosh’s other legacy bait was a Paycheck Baits Punch Skirt, another throwback to another time that he still has a few of in his tackle shop.

To supplement those baits, Tosh added a ChatterBait, a wacky-rigged Senko and a Lobina Rico Popper that helped him cull up with mostly 3-pounders. He boated them in secret, in hidden cuts and pockets tucked deep in the Delta’s maze, and that, he said, was by design.

“I think about my grandpa out there,” he said. “I think about my dad who doesn’t fish much anymore. I think about that older generation watching and fishing vicariously through me. I’m a tournament warrior that was raised by an extreme angler who fished until he couldn’t anymore.”

The Top 10 pros on the California Delta finished:

Pierson took home an extra $1,000 as the highest finishing Phoenix MLF Bonus member. Boaters are eligible to win up to an extra $35,000 per event in each Toyota Series tournament if all requirements are met. More information on the Phoenix MLF Bonus contingency program can be found at PhoenixBassBoats.com.

The Top 10 Strike King co-anglers on the California Delta finished:

The Day 1 Berkley Big Bass $150 award winner in the Strike King co-angler division, was Bern with a largemouth weighing 8 pounds even, while the Day 2 $150 award went to Firuz Gizatullin of Discovery Bay, California, who weighed in a 6-pound, 14-ounce largemouth.

The next event for Toyota Series anglers will take place June 23-25 – the Toyota Series Presented by A.R.E. at the Potomac River in Marbury, Maryland. For a complete schedule, visit MajorLeagueFishing.com.