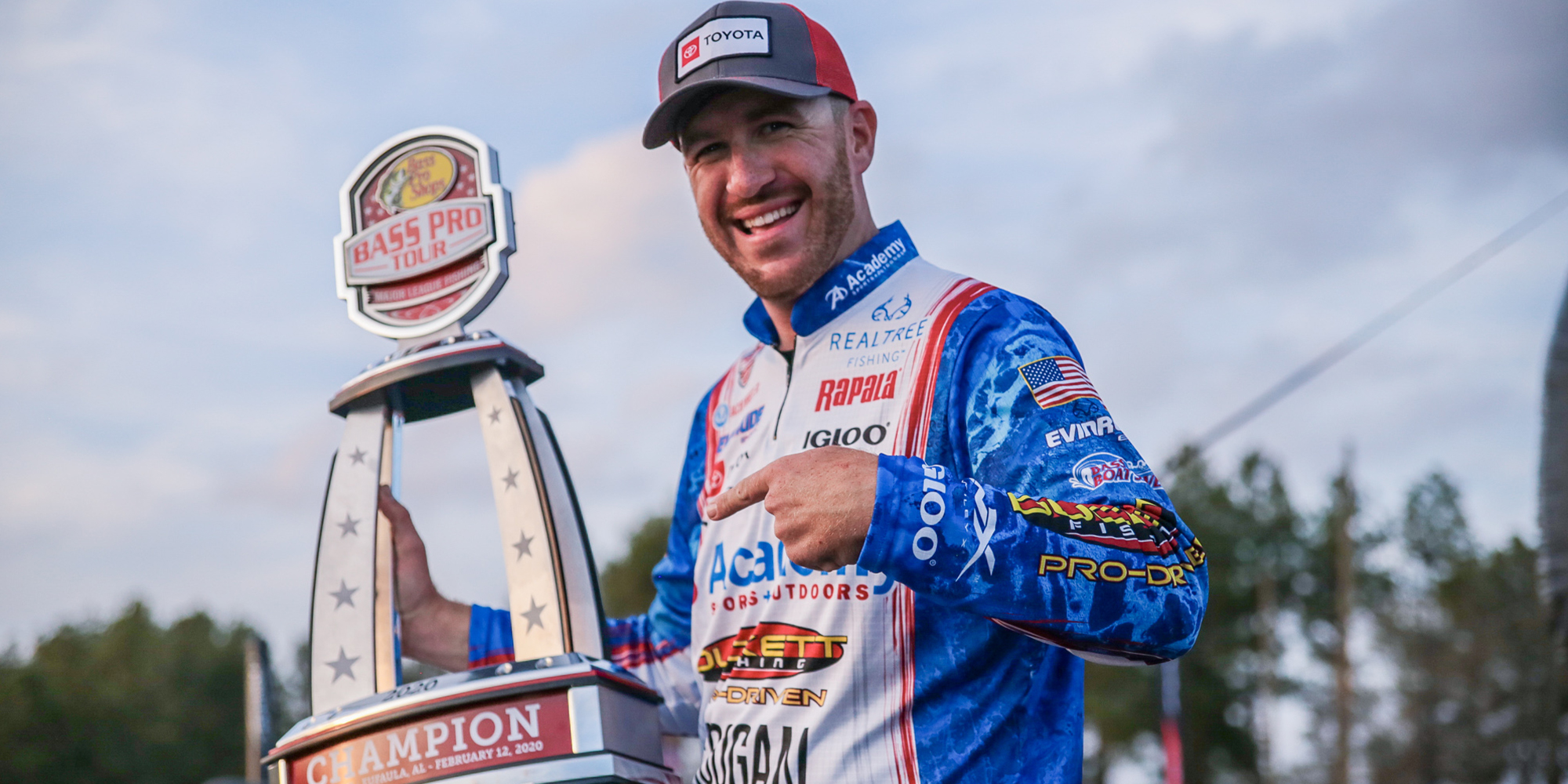 Jacob Wheeler is the winner of the 2020 Bass Pro Tour B&W Trailer Hitches Stage One Presented by Power-Pole. Photo by Phoenix Moore

February 12, 2020 (Eufaula, Ala.) – Team Toyota pro Jacob Wheeler won the Bass Pro Tour B&W Trailer Hitches Stage One Presented by Power-Pole with 24 bass weighing in at 68 pounds, the highest one-day total for the week. MLF rookie Bryan Thrift led the field handsomely early in Period 1 with five catches in the first 30 minutes of competition. Ott DeFoe landed scorable bass at a steady pace all day long, including holding the lead at the of Periods 1 and 2. Ultimately, Wheeler secured a solid lead with an 11-fish run as the clock wound down.

With cameras rolling on MLF NOW! at the end of Period 3, Jacob Wheeler paused to take in the reality that he had won.

“Unbelievable,” he exclaimed. “To start off this 2020 Bass Pro Tour season with a win here on Lake Eufaula; it’s unbelievable. I owe it to everyone who supports me, especially my wife, Alicia.”

Wheeler, winner of Qualifying Round Group B and Thrift, winner of Qualifying Round Group A, each earned a Championship Round berth skipping the Knockout Round on Tuesday. A new Bass Pro Tour rule for 2020, there was some uncertainty on how a day off would fair for the advanced anglers. Thrift and Wheeler coming in first and second on Championship Round suggests that a day off is nothing to worry about.

Ott DeFoe rode a strong morning bite to a commanding lead in the second period. He caught the Berkley Big Bass of the day, weighing in at 6 pounds 15 ounces, within 90 minutes of Period 1. As the sun passed overhead, Thrift assumed a seemingly comfortable lead before Wheeler took control for good with an impressive flurry of fish catches: 11 in one hour, 24 for the day.

“I caught two right away and then the first spot dried up,” DeFoe said. “They weren’t set up the same as they were yesterday, and I couldn’t get them fired up.”

The B&W Trailer Hitches Stage One Presented by Power-Pole Championship Round finished as follows:

Fans around the world can catch all the action every day of competition on MLF NOW! live stream on MajorLeagueFishing.com or download the MLF App for your Apple or GooglePlay device or on MyOutdoorTV (MOTV).

The Bass Pro Tour began in 2019 and features 80 of the best professional anglers in the world, including Kevin VanDam, Edwin Evers, Aaron Martens, Mike Iaconelli, Jordan Lee, and Skeet Reese. Each stage includes six days of competition using the Major League Fishing, catch-weigh-and-immediately-release format, where every bass over a variable minimum weight, which is two pounds on Lake Eufaula for Stage One, toward a cumulative weight total for the day. Variable minimum weights are determined by fishery akin to a golf course handicap. The field of 80 anglers is divided into two Groups (A and B) of 40 to compete in the Qualifying Round for a two-day total. The winners of Group A and B advance directly to the Championship Round while places 2-20 join together and advance to the Knockout Round on day five, which determines the final eight who will compete in the field of 10 on that final day, the Championship Round, for the Stage title and $100,000.