Wheeler Wins the Knockout Round: Wednesday’s Championship Round Set 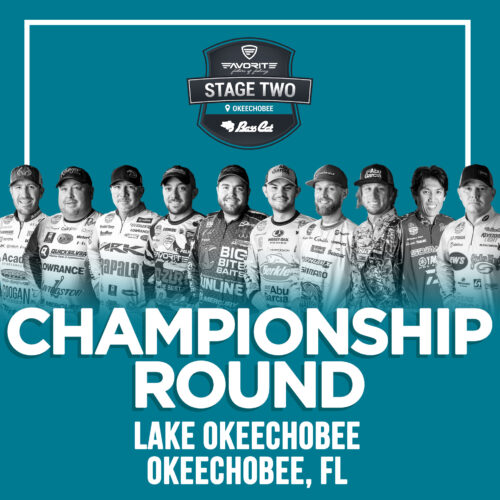 February 25, 2020 (Okeechobee, Fla.) Jacob Wheeler won the Knockout Round in the Bass Pro Tour Favorite Fishing Stage Two Presented by Bass Cat. Zack Birge took second with only a 2-pound, 5-ounce deficit. SCORETRACKER® moved today on Lake Okeechobee with more than 190 bass caught as compared to 71-110 on the previous four days of competition. Five anglers tied for catching the most scorable bass at 10 caught each. Alton Jones landed the Berkley Big Bass of the Day with an eight-pound, three-ounce largemouth late in Period 3. The Championship Round begins tomorrow at 8:00 a.m. ET as 10 Pros compete for the $100,000 prize and Stage Two title.

Academy Sports pro Jacob Wheeler will enter his second Championship Round in as many Stages on the 2020 Bass Pro Tour. He steadily caught fish all day long but his burst of six fish in Period 2 ended with a 4-pound, 13-ounce largemouth that placed him comfortably at the front of the pack. Wheeler then used Period 3 to look for additional areas rather than running up a larger lead.

“It’s going to take a lot of weight to win tomorrow,” Wheeler predicted. “The big ones are starting to move up and it’s going to be fun. The ‘Big O’ saved the best for last.”

At the end of the day, Wheeler scored 35 pounds, 1 ounce to win the Knockout Round only 2 pounds, 5 ounces ahead of Favorite Fishing pro Zack Birge. After catching no fish on his first day of the Qualifying Round, Birge surged on Sunday to catch 27 pounds, 3 ounces to advance to today’s Knockout Round. Today he bettered himself with 32 pounds, 12 ounces and a second-place finish to advance to tomorrow’s Championship Round.

“I had a good day,” Birge said, adding that his success helps ease the pain of coming up just short at Lake Eufaula where he missed the Knockout Round by one place. “I cleared my mind and went fishing with one rod on my deck all day long.”

Birge, Wheeler, Jeff Sprague, Michael Neal, and Stephen Browning all caught 10 scorable bass today. All but Browning will advance to the Championship Round, whose last-minute catch of 3 pounds, 2 ounces still left him 1 pound, 5 ounces behind Fletcher Shryock.

The competition concludes Wednesday with the Championship Round where ten anglers compete for the Favorite Fishing Stage Two Presented by Bass Cat title. The weather forecast suggests thunderstorms may hinder the competition in the morning. Bass Pro Tour Tournament Director Aaron Beshears will consider safety over competition every time.

“We continuously monitor weather on the entire body of water to determine the safest situation for the anglers and MLF staff,” said Beshears. “With a lake the size of Okeechobee, we will be especially cautious for all involved.”

The Bass Pro Tour began in 2019 and features 80 of the best professional anglers in the world, including Kevin VanDam, Edwin Evers, Aaron Martens, Mike Iaconelli, Jordan Lee, and Skeet Reese. Each stage includes six days of competition using the Major League Fishing, catch-weigh-and-immediately-release format, where every bass over a variable minimum weight, which is two pounds on Lake Eufaula for Stage One, toward a cumulative weight total for the day.  Variable minimum weights are determined by fishery akin to a golf course handicap. The field of 80 anglers is divided into two groups of 40 to compete on days one and two respectively for the Shotgun Round. On days three and four, the Elimination Round culls the field based on a combined 2-day total weight from each angler’s Shotgun and Elimination Round. The top 20 anglers from each group in the Elimination Round (40 total) advance to the Knockout Round on day five, which determines who will compete on that final day, the Championship Round, for the Stage title and $100,000.