Huddleston Pro Wins First Toyota Series Victory and Automatic Bid into Toyota Series Championship Next Month to Compete for up to $200,000 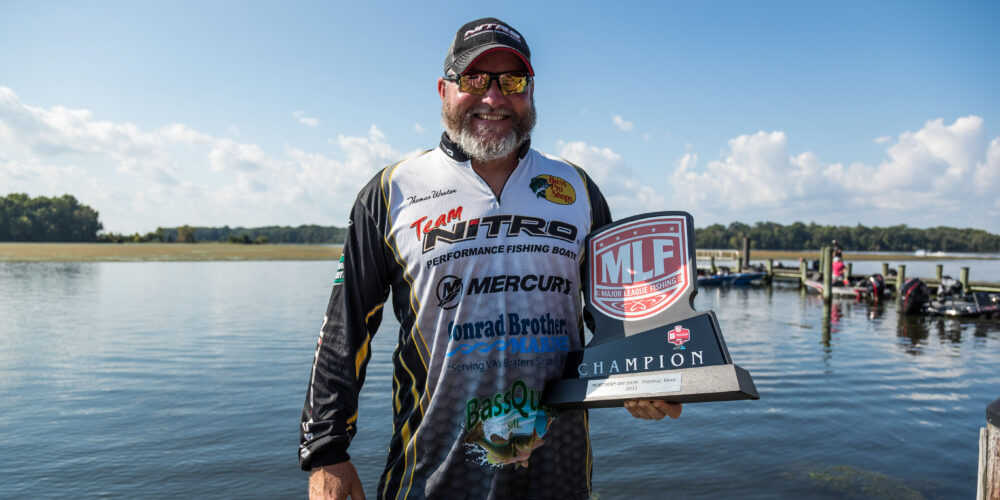 MARBURY, Md. – Toyota Series pro Thomas Wooten of Huddleston, Virginia brought a five-bass limit to the scale Saturday weighing 14 pounds, 6 ounces to win the three-day Toyota Series Presented by A.R.E. at the Potomac River in Marbury, Maryland. Wooten’s three-day total of 15 bass weighing 45-2 earned him the win by an 8-ounce margin over second-place pro Aaron Dixon of Bel Alton, Maryland and earned Wooten the top payout of $33,251 in the third and final tournament of the 2021 Toyota Series Northern Division.

After catching 18 pounds on Day 2 to rally into the Top 10, Wooten put up the best bag from the final day (14-6) on the Potomac River to claim his first Toyota Series victory.

“I love the Potomac,” said Wooten. “This win feels really good. I won a truck and a boat at a regional event here, I think in 2007, and that was one of the bigger tournaments I’ve won up here. I’ve finished top-five numerous times and I’ve been close. So, it feels good.

“I like the tougher tournaments on the Potomac, especially when the grass came back as good as it did this year,” continued Wooten. “I figured if I could get five bites a day flipping, I’d have a chance. I was catching 10 to 12 pounds on a swim jig, and figured I’d go punch one up. I knew if I got to the last day, there was going to be one rod on the deck and I was going to punch all day. But, they turned on with the frog yesterday, and I couldn’t leave it.”

Catching the biggest bag of the tournament on Day 2 vaulted Wooten into contention, and he did it with a key change in tactics. On Day 1, he tossed around a swim jig and a buzzbait in eelgrass and punched for a few other fish. On Day 2, he started throwing a frog.

“I figured it out about 11:30 [on Day 2],” said Wooten. “They quit biting the buzzbait, quit biting the swim jig, and I started throwing the frog. Once I started, I had about 15 blowups and culled six or seven times. It wasn’t as good on the final day, I think I leaned on them a little hard on Day 2, but they were still there.”

Wooten won narrowly, edging out Dixon by ounces, but it was enough to send him on to Pickwick and possibly reignite his dreams of fishing at the top level. A boat captain in high school fishing with his son, Wooten said he doesn’t have a lot of spare time to travel the country in search of bass, but he may try to make some more.

“I do want to get back into it, a lot more than what I am now,” said Wooten, who finished 12th and fifth in the Northern Division in 2007 and 2008. “I have three young kids, my oldest is 12. I did make the Pro Circuit one year, I left the Hudson River and finished fifth in points, and they called me on the way home. My wife was pregnant, and I couldn’t do it – you’ve got to make your priorities right – but, I would like to fish full-time as a pro, I really would, so maybe this is the start.”

Pro Matt Becker of Finleyville, Pennsylvania took home an extra $1,000 as the highest finishing Phoenix MLF5 Bonus member. Boaters are eligible to win up to an extra $35,000 per event in each Toyota Series tournament if all requirements are met. More information on the Phoenix MLF5 Bonus contingency program can be found at PhoenixBassBoats.com.

The top 10 Strike King co-anglers on the Potomac River finished:

In the Strike King co-angler division, the $68 Day One Berkley Big Bass award winner was David Williams of Fredericksburg, Virginia, with a 4-pound, 8-ounce bass, while the $68 Day Two award went to Kevin Hesson of Seneca, Pennsylvania with a 3-pound, 15-ounce bass.

The Toyota Series at the Potomac River was hosted by the Charles County Board of Commissioners. It was the third and final regular-season tournament in 2021 for Northern Division anglers. The next event for Toyota Series anglers will take place on Oct. 28-30 – 2021 Toyota Series Championship Presented by A.R.E on Pickwick Lake in Counce, Tennessee, hosted by the Hardin County Convention and Visitors Bureau. For a complete schedule, visit MajorLeagueFishing.com.

The 2021 Toyota Series presented by A.R.E. consists of six divisions – Central, Northern, Plains, Southern, Southwestern and Western – each holding three regular-season events, along with the International division. Anglers who fish all three qualifiers in any of the eight divisions and finish in the top 25 will qualify for the no-entry-fee Toyota Series presented by A.R.E. Championship for a shot at winning $235,000 cash, including a $35,000 Phoenix MLF5 Bonus for qualified anglers. The winning Strike King co-angler at the championship earns a new Phoenix 518 Pro bass boat with a 115-horsepower Mercury outboard.