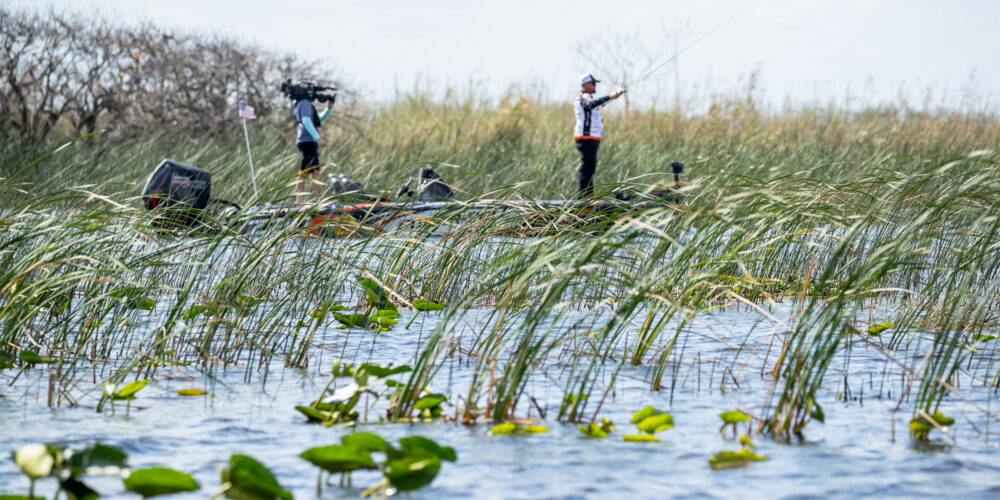 Lake Okeechobee is a lake known for flipping and pitching or winding baits through vegetation. That’s what generally fills the Top 10 at every stop made here, and that was the case again during the 13 Fishing Stop 1, with the final 10 anglers using a mix of these methods.

Popular areas like Harney Pond, the North Shore, King’s Bar, and South Bay also tend to pop up on every tournament recap for Okeechobee, and they were players again for the kickoff to the 2021 Tackle Warehouse Pro Circuit Presented by Bad Boy Mowers.

Skeet Reese won the tournament with a four-day total of  82 pounds, 14 ounces.

Chris Lane has fished Okeechobee many times over the years and knew what to do when his area on the north end of the lake muddied up. Judging by the wind direction, he knew that heading south was the way to go when things changed.

He opened the tournament with a 16 pound, 6-ounce sack fishing up north and then pulled the plug on the location the following afternoon.

“I fished most of the first two days north and made the decision to run south on the second afternoon due to the wind and weather,” Lane says. “I know this lake and believe I found a spot good enough to win. I just didn’t capitalize on my bites the last two days.”

His area on the south end was in Pelican Bay and featured a mix of reeds, pads, and more. Lane’s approach was to flip and pitch a six-inch Bass Pro Shops 6″ Stik-O Worm in black and blue to isolated and cast a River2Sea Lane Changer topwater prop bait in Orange Crush between and around patches of vegetation.

Each day his weights increased and he closed out the event with his biggest bag at 20 pounds, 1 ounce.

Jim Neece Jr. relied on one 100-yard stretch north of King’s Bar near the Kissimmee River and fished it all four days of competition to finish third, after leading the first and third days.

“The hard bottom there was key and fish were coming in to spawn,” Neece said of his honey hole that featured a variety of grass, namely the arrowheads that he specifically targeted.

He fished a Zoom Magnum Ultravibe Speedworm in Junebug on the first two days and final day. The third day was all about the 1/2-ounce Z-Man Evergreen Chatterbait Jack Hammer in Clearwater Shad as he fished in windy conditions.

Dicky Newberry had never been to Okeechobee and shared that he didn’t have a good practice. He did, however, get a few bites in the protected South Bay area of the lake, which was the same area that winner Skeet Reese found.

“I ran into it during practice and said, ‘Hey, this looks good,’ and caught one right away on a ChatterBait,” Newberry recalls. “That’s where I ended up fishing all four days of the event.”

He weighed in solid bags each day between 15 pounds, 6 ounces and 20 pounds, 12 ounces a day, and each of the last three days of the tournament, he toted a 7-pound kicker to the scales.

What he keyed on was a slight break line, but a significant change on a shallow lake like Okeechobee. His best bites came from areas where the water went from 2 to 3 feet deep and he believes they were staging fish.

Each day he used a Gambler Burner Worm in Junebug on both 3/16 and 1/4-ounce weights with a 5/0 hook and says his retrieve was critical.

“If it got down in the bottom, it would get muck on it, so you had to reel it just fast enough to keep it swimming right on top of the bottom,” he adds.

Bill McDonald’s key area was just a short boat ride outside the locks at Clewiston. He had a quick trip to the West Wall that he fished all day with several other competitors.

McDonald found the area during a pre-practice scouting trip and the fish were still there when he returned for the event.

“I found it back in mid-January after running all over this lake,” McDonald says. “During this tournament, I stayed there each day and only burned three-eighths of a tank of gas all week long.”

What he focused on was high spots that fish were using to spawn.

“The key was to get around the little clusters of reeds that were in that 2.6 to the 2.8-feet range,” McDonald says. “The other areas around it with the hay grass were a foot deeper and they were using the reed heads to spawn because they were shallower.”

McDonald would pitch a 5- or 6-inch Strike King KVD Perfect Plastic Ocho in Black Blue Flake with a 3/8-ounce tungsten weight and 20-pound Seaguar Tatsu and said that fishing slowly was the key.

“I would pitch it and let it soak,” McDonald says. “Most of the bites would just feel heavy.”

Miles Burghoff kicked off the event in second place with a limit weighing 26 pounds, 2 ounces. After that, his bags dwindled to weights in the mid-teens each day while fishing the same area on the West Wall as Bill McDonald and Anthony Gagliardi.

He stuck with flipping and pitching throughout and believes he simply ran out of fish in his area.

“The first day, I was catching them on isolated reeds,” he says. “Flat reeds and arrowheads were the biggest keys. After the first day, it got tougher and I had to get in the denser stuff to get a bite. On the last day, there was a little less pressure and I went back to the smaller, isolated stuff with three or four reeds in a group.”

He started the event with a 3/4-ounce tungsten weight and a Z-Man Goat Twin Tail Grub in the black and blue color and downsized to a 3/8-ounce weight with a Junebug Z-Man Bang StickZ.

“The first day, they were more aggressive and it was more of a reaction bait,” Burghoff says of the bite with the heavier weight. “I switched down to a 3/8-ounce and changed baits. You had to slow down, let it sit and keep shaking it to get a bite as the tournament wore on.”

For both lures, he used a 7-foot, 6-inch Fitzgerald Fishing Heavy All-Purpose Rod. His line of choice was 65-pound test Seaguar Smackdown Braid.

Pete Ponds started strong with a 20-pound bag on the first day and saw his weights drop from there, with the remaining three bags all in the mid-teens for weight.

He fished the same area near Harney Pond every day and made some lure and location adjustments to remain on the fish each day.

His area was something that he found in practice after struggling to find fish.

“The first day of practice, I pulled up and caught four in that area real quick and moved on,” Ponds recalls. “I didn’t have a great practice at all, so I started there for the tournament.”

His area was a shallow bay that fish were using for spawning, Ponds is unsure if they were prespawn or postspawn bass transitioning, but they were moving nonetheless. This forced him to adjust each day to keep getting bites.

“On the first day, I fished out along a point made in the grass and the second day, they were about halfway between there and the back pocket,” Ponds says. “That gave me the idea that they were moving and I ended up catching them in the back on the final two days.”

While he was fishing vegetation, he made sure to stay back a ways from the edge of it.

“I wasn’t in the vegetation; it was more out front,” Ponds says. “I was a casting distance away and fishing water that was 2.5 feet deep instead of fishing right along the line where it was a foot shallower. I think some of the others in the area missed that and didn’t do as well.”

His top bait was a black Scum Frog Trophy Series Chugger that he used the first two days. He switched to a wakebait when the wind became too strong and he also mixed in a Junebug colored soft stick bait.

Ryan Salzman made it into the Top 10 with a 22-pound, 5-ounce limit to rocket himself from 49th to 10th on the third day.

His big day came after pedestrian 12- and 13-pound bags to start the tournament. The first two days, he stuck with the South Bay area and flipped a Reaction Innovations Sweet Beaver 4.20 in Penetration with a 1.5-ounce Titan Tungsten weight on 65-pound Yo-Zuri SuperBraid.

“Midway through the second day, I bailed on the area and went to the north shore and started chucking a green pumpkin 1/2-ounce Z-Man Evergreen Chatterbait Jack Hammer with a Reaction Innovations Little Dipper in Shiner for the trailer and flipping isolated reeds with the Sweet Beaver.”

On the final day, he found a different look to his area and had to adjust again.

“After two days with a hard south wind, the water changed and got dirtier,” he says. “They were just knocking at the ChatterBait and not getting it. I had to bail on that area, too, and went and grabbed the flipping stick and started looking for cleaner water.”

Since it was Cole Floyd’s first time to Okeechobee, he’s thrilled to have caught enough to secure a Top-10 finish. He admits that practice was tough for him and it was overwhelming to tackle the big lake for the first time.

He expanded on what bites he did have in practice and found an area mostly to himself in the lake’s South Bay area. His weight totals were in the teens all week long, ranging from 13-15 to 17-11 for a consistent week.

“I wasn’t getting many bites in practice and when I did get a bite, there were other boats everywhere,” Floyd says. “I decided to try to find something else and look for cleaner water without so many guys fishing the same place.”

He settled on what amounts to a boat lane around South Bay with a small bay on one side. Floyd believes the fish were using the lane to get to the bay to spawn and he was picking them off on the way to and from their spawning areas.

Floyd targeted reeds with blown-in hyacinth mats and punched a Strike King Rage Bug the entire time. He alternated between a 1- and 1.5-ounce weight depending on the thickness of the vegetation.

Anthony Gagliardi caught his best weight of the tournament, a 24-pound bag fishing just outside the takeoff along the West Wall. From there, his weights diminished, but he was able to collect another Top-10 finish along the way.

He targeted the densest reeds he could find on the first day before resorting to sparser cover as the week went on.

“That big bag on the first day came from fish that were way up inside of the thick reed patches,” Gagliardi says. “They didn’t replenish after that.”

After a massive first day with the jig, he couldn’t get a bite on it the following days and began to flip and pitch a 6-inch Berkley PowerBait The General or a MaxScent Critter Hawg. Both of these baits were black and blue and fished with a 1/2-ounce weight.