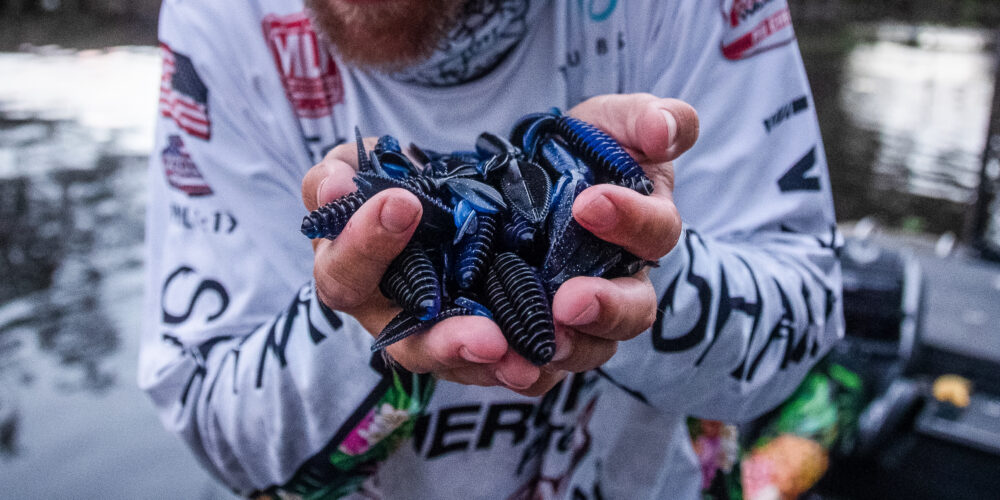 It’s a new year and a new season of the Tackle Warehouse Pro Circuit presented by Bad Boy Mowers,  but the opener in southern Florida proved to feature the same old Okeechobee. Standards such as vibrating jigs as well as flipping and pitching soft stick baits proved to be effective ways to catch bass, and both of those lure styles were well represented in the top 10 of the first event of the year.

Add in swimming worms, frogs, topwater baits and pitching jigs and you have all the Big O staples covered for your next trip.

1. To win $100,000 and his first major tournament since 2015, California’s Skeet Reese leaned on a one-two punch of a 6-inch Berkley PowerBait The General in junebug and a green pumpkin vibrating jig with a Berkley PowerBait The Deal in the Skeet’s green money color. He flipped and pitched his stick bait to isolated cover the first two days and opted for the vibrating jig as the wind picked up on the final two days.

2. Like Reese, Chris Lane utilized two different lures to get him to the final day and set up a second-place finish. Flipping and pitching a Bass Pro Shops 6-inch Stik-O Worm (black and blue) to isolated cover was his bread and butter as he fished across the lake. Lane started off fishing the first two days on the north shore and fished the last two days on the south end of the lake near Pelican Bay.

Another key to his success was a River2Sea Lane Changer topwater prop bait in orange crush, which he fished in the mornings and between and around patches of vegetation.

3. Jim Neece Jr. led the first day of the event on the strength of a 27-pound bag that he caught with a Zoom Magnum Ultravibe Speed Worm in junebug as he fished north of King’s Bar near the entrance to the Kissimmee River. That bite fizzled for him the second and third days, and he switched to a 1/2-ounce Z-Man/Evergreen ChatterBait Jack Hammer in clearwater shad that he paired with a Reaction Innovations Little Dipper to regain the lead after the third day.

4. Dicky Newberry fished the same general area with the same bait every day of the tournament. He caught a handful of bass with a vibrating jig, but the vast majority of his fish were caught on a Gambler Burner Worm in junebug. He fished it on both 3/16- and 1/4-ounce weights with a 5/0 hook as he keyed on slightly deeper water in the South Bay area.

5. Bill McDonald fished the West Wall just outside the launch site in Clewiston and faired the best of the bunch that fished there all four days. He alternated between three different lures throughout the tournament, based on what was in front of him at the time.

Both a 5- and 6-inch Strike King Ocho in black/blue flake pitched to reed heads with a 3/8-ounce tungsten weight and 20-pound-test Seaguar Tatsu fluorocarbon rounded out his approach.

6. Miles Burghoff remained near the top of the leaderboard all week by fishing the West Wall with two others in the top 10, among many other pros. In that section of the lake, Burghoff flipped and pitched to areas where he believed fish were spawning, targeting both isolated clumps and thicker patches of vegetation with a 3/4-ounce tungsten weight and a Z-Man Goat Twin Tail Grub in black and blue and downsizing to a 3/8-ounce weight with a junebug-colored Z-Man Bang StickZ as fishing pressure increased. For both lures, Burghoff used a 7-foot, 6-inch heavy Fitzgerald Fishing All Purpose Series rod. His line of choice was 65-pound-test Seaguar Smackdown braid.

7. Pete Ponds relied on the same area near Harney Pond each day of the tournament and made slight adjustments to stay on the fish every day. His top bait was a black Scum Frog Trophy Series Chugger that he used the first two days. After the wind picked up and the fish weren’t locating the frog well, he switched to a wake bait with a wide wobble. Ponds also mixed in a junebug soft stick bait.

8. Ryan Salzman‘s week was bolstered by his big bag on the third day that vaulted him from 49th into the top 10 to make the final-day cut. He mixed it up all week, but a Z-Man/Evergreen ChatterBait Jack Hammer paired with a Reaction Innovations Little Dipper (shiner) and a 3/8-ounce Yo-Zuri Rattl’n Vibe Lipless Crankbait in gold-black were keys for covering water.

Flipping and pitching a Reaction Innovations Sweet Beaver 4.20 in penetration with a 1.5-ounce Titan Tungsten weight on 65-pound Yo-Zuri SuperBraid served as his secondary weapon for thicker cover during the week.

9. On Cole Floyd‘s first-ever trip to Okeechobee, he kept things extremely simple and fished the same area with the same bait each day. Floyd flipped reeds and blown-in hyacinth mats with a Strike King Rage Bug in black and blue. He alternated between a 1- and 1 1/2-ounce weight depending on the thickness of the cover.

10. Anthony Gagliardi also fished the West Wall beside McDonald and Burghoff and had to switch his lures each day to keep getting bites.