Upshaw Moves Ahead at Cumberland

Consistent bags of smallmouth have Oklahoma pro in the lead 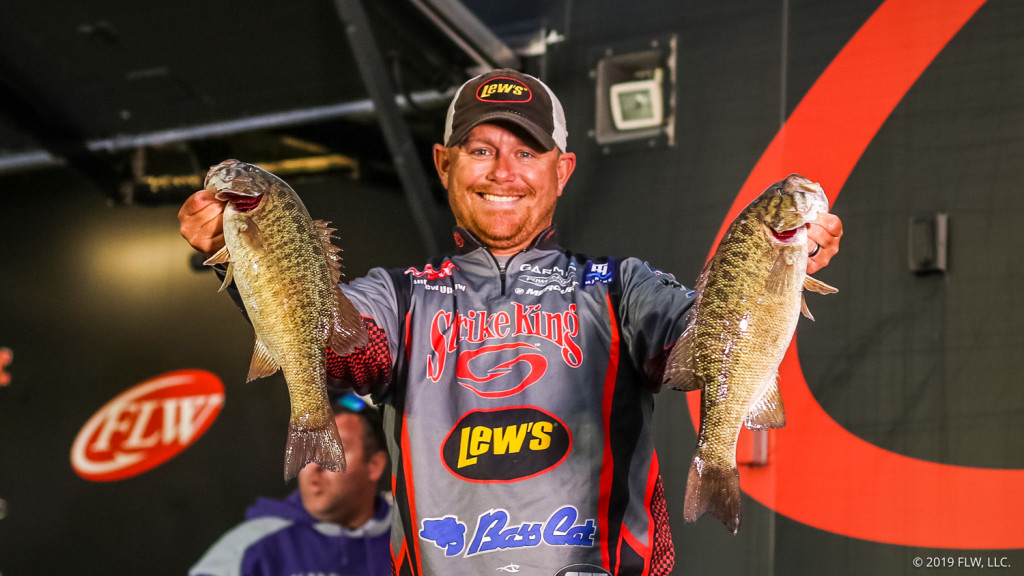 Andrew Upshaw is on a pattern. Actually, two patterns.

First, he’s dialed in on transitioning fall smallmouths here on Lake Cumberland, two days into the 2019 Costa FLW Series Championship. Upshaw is feeling so comfortable and confident right now that it looks like he has a great opportunity to solidify another pattern: winning on smallmouth reservoirs in the hills of Tennessee and Kentucky.

Upshaw won the April 2019 FLW Tour event on Lake Cherokee with a smallmouth pattern. Tonight, he’ll go to bed with the day-two lead and one day to go on Lake Cumberland thanks to a 15-pound, 1-ounce limit that has him in first by 1-13 with 30 pounds total.

“I have no idea why, but I wanna keep it going,” he says. “It’s been great. I love smallmouth, and I love fishing these types of reservoirs like Cumberland and Cherokee.

“I really enjoy them. I feel like I have a pretty good idea of how they set up on cover, and I think that helps me a lot.”

Upshaw’s day actually started pretty slowly. He didn’t have a keeper until about 9:45. He wasn’t worried, though.

“I didn’t start practice every day until 10 o’clock. I knew that first hour, hour and a half, was going to be slow, and if I caught one it was going to be a bonus fish,” Upshaw says. “I think the way they’re set up on what I’m fishing it’s a timing thing. I just had to be there at the exact right time every day.

“And the thing is, I’m running a pattern. It’s not necessarily a spot. I found three or four other spots today that had them on it. All in all, I think I caught about 18 keepers today, and I was culling ounces and finally decided to lay off them.”

On a windy, rainy day one, Upshaw caught a few early fish on a buzzbait, then switched to fishing a Ned rig and a jig. Today, under high skies with little wind, he never bothered with the topwater. He went straight to his confidence baits.

“I kind of figured out how these fish are transitioning,” adds Upshaw. “The way they’re setting up on stuff; I have a lot of confidence on how they’re setting up, and I’m just really fishing slow and thorough. I think that’s a big key is really just taking my time, not getting ahead of myself and not really putting a lot of other things out there – just putting a couple rods in my hand and going fishing.”

Tomorrow, expect more of the same. Upshaw says the smallies were choking on his baits this afternoon – a sign that he’s got the right baits in front of the right fish with the right presentation.

“The way they’re set up, they’re actually more winter than they are fall. I just think I caught the head of it kind of like I did at Cherokee, and I think more are coming.

“If I can just go out there, put my head down and go fishing, I think I’ll be fine.” 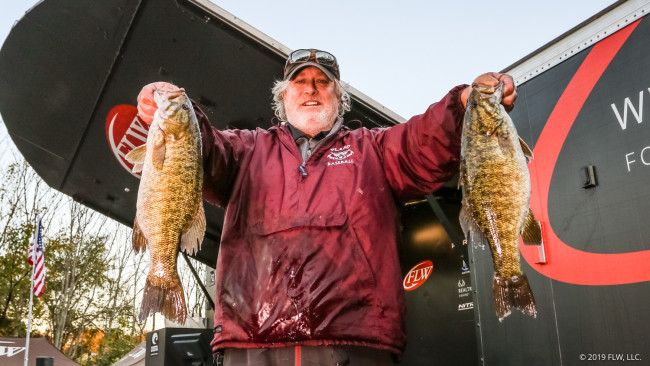 While most of the Costa FLW Series Championship field was on Cumberland practicing for this week’s tournament, Rob Burns was on a roof back home in Texas. He’s a roofing contractor, and a busy fall season had him preoccupied making money instead of dialing in the fish.

Apparently, though, it didn’t really matter, as Burns is fixin’ to make money here in Kentucky this week, too. He’s managed two consistent days of targeting Cumberland smallmouths to get into the final day in second place with 28 pounds, 3 ounces.

“Yesterday was my first day on the water. Yesterday I knew with the wind blowing and the rain it would be good for my style of fishing: reaction baits, covering water, trying to play the wind. So that’s what I did. I ran all the way down south and just kind of worked my way back up.

“That’s pretty much what I did today. I’m pretty much using one bait. I picked it up yesterday. It’s traditionally good for me. It’s good at Table Rock. It’s good back in north Texas. The lake is set up for it. I had a whole bunch of other stuff rigged up, but it was working. I just covered miles of water today. I have a better idea of where they’re at, but there’s not a spot or anything like that. It’s more of a pattern.”

Burns knew what he wanted to do before he ever got here, but he’s still dialing in on the pattern, which mostly consists of fishing fast with his reaction bait near the mouths of major coves. His biggest hurdle is that he doesn’t know where to find similar water with the right kind of rocks. Because he couldn’t practice, he has to run around and look for it during the tournament. Once he finds it, he has to figure out whether the fish are out on the points, or up in the pockets.

Tomorrow, if he can find enough or expand on what he’s seen already, Burns has shown his pattern can produce the kind of fish needed to catch Upshaw. 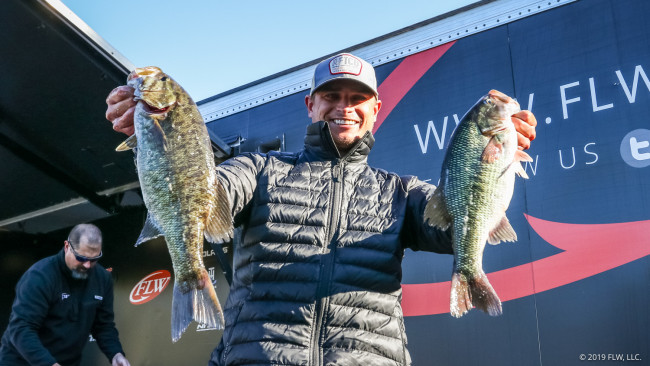 Matt Pangrac feels like he left a few out there so far this week. The Oklahoma pro has weighed in 26 pounds, 10 ounces in two days, but he felt like he was on more and better fish.

“I made a long run yesterday. I thought they were going to really chew, and they bit for half an hour,” he says. “Then I fished for seven hours to try to catch three more. I caught a little spot on the way in. I thought I’d have all smallmouth.

“I didn’t expect it to work as well this morning. I’ve got a secondary deal going with a drop-shot, and I got down there and in the first 10 minutes I had two 3 1/2-pound smallmouths, so I just ran it with that and added a couple largemouths. I think I caught seven or eight keepers throughout the day.”

Overall, Pangrac has three patterns working. He spent the last day of practice specifically preparing for today, knowing there’d be sunshine and little wind. The drop-shot deal was part of that plan. The rest is all about power fishing.

“To me this is a mix of Grand and Table Rock without the docks, and I just really like how those two lakes set up and fish. I feel like I kind of understand what’s going on and can look around and know that’s what I want to fish.”

His challenge tomorrow is to finally figure out how to get more than two big smallmouth bites in one day. He was on the brown fish in practice, but has brought in smallies, spots and largemouths in the tournament.

“I think that front that went through yesterday just kind of scattered them,” Pangrac adds. “I was seeing a lot more fish underneath the boat on the graph than I had been during practice. I think they kind of got back on the cover today where I could get them with the reaction bait or target them.” 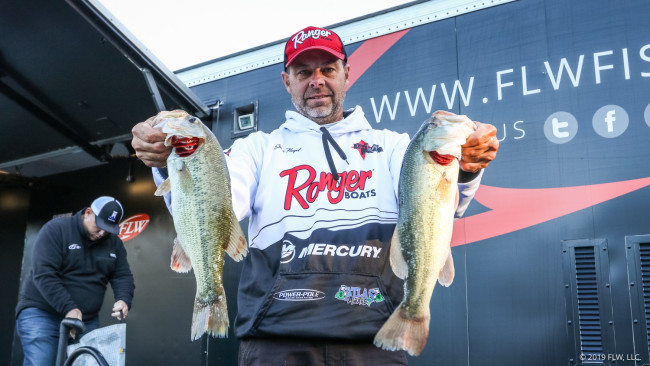 The senior half of one of FLW’s best father-son tournament duos is Steve Floyd, father of Bethel University standout and fellow championship qualifier Cole Floyd. This week, Steve got the better of his son thanks to what has been the most consistent largemouth pattern of anyone in the tournament.

In fact, had he not lost several key fish today, Steve might be neck-and-neck with Upshaw. He says he’s been fishing the way he likes to fish – in shallow water with power-fishing tackle.

“When I got to my first spot and put the trolling motor down, they were biting. I lost one right out of the gate on a topwater. Then I hooked one flipping and lost it,” says the Ohio pro. “I had another flipping bite that I saw it bite and missed it. Then I finally caught one. And then it kind of slowed down. It was a flipping kind of day. I just went and put my head down and flipped. With no wind and sunshine it was perfect for that. I think I had 10 keeper bites, and I landed five of them. Late in the day, I saw one 5-plus bite my bait, and I set the hook and it wrapped me up and I broke off.”

The former Kentucky Lake winner flipped yesterday as well, even though the conditions seemed perfect for reaction baits, which is what many of the pros fishing around him were using. In fact, there have been a lot of other anglers sharing water in the area.

“There’s a lot of fish. It’s just that they get beat on. They get educated.”

If he can keep them hooked and have the water to himself on Saturday, there’s a chance for a really big bag of largemouths to make it to weigh-in in Burnside. 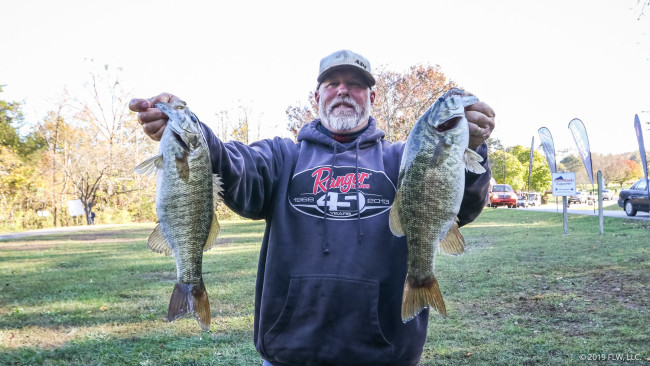 Also on the smallmouth bandwagon is California’s Rusty Salewske, who’s weighed in 25 pounds, 7 ounces with a straightforward smallie pattern.

“I found a lot of fish on bluff walls and points,” he says. “I’m just throwing a jig is all I’m doing. I had a lot of bites yesterday, but these smallmouths are so mean. I literally could have weighed in a 20-pound bag yesterday. I never caught a good one yesterday.

“Today was really tough for me. I broke off two in brush piles. I’ve got a little brush pile deal, too, that I check a couple times each day. Everything, even the brush pile fish, have been on the jig. I’m keeping the boat in about 35 [feet] and just covering water fast with a heavy jig – a 3/4-ounce jig.”

Salewske’s jig presentation is interesting. He fires the jig out and works it back with quick turns of the reel to make the jig dart off the rock then tick back to bottom. It’s a good alternative to dragging because it snags less and allows him to cover water faster.

The fish have a weird habit of knocking his bait and not eating it, so Salewske waits until they fully load up to set the hook. If he can keep them pegged tomorrow and find that 20-pound bag he left out there on day one, he’s still got a chance at the W. 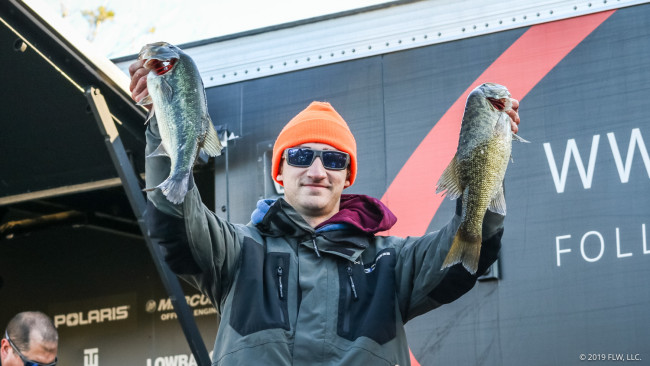 Roach still ahead on co-angler side

Mason Roach maintained his lead in the co-angler division today and now has one day left to fish to earn the wire-to-wire victory. Roach says he's been fishing a finesse soft plastic on a heavy jighead for two straight days. Tomorrow, he'll be paired with Andrew Upshaw, the pro leader, who's also finesse fishing, and should have plenty of opportunities to put his go-to rig in front of fish.