After the Thaw: Toyota Series Plains Division Kicks off on Lake of the Ozarks 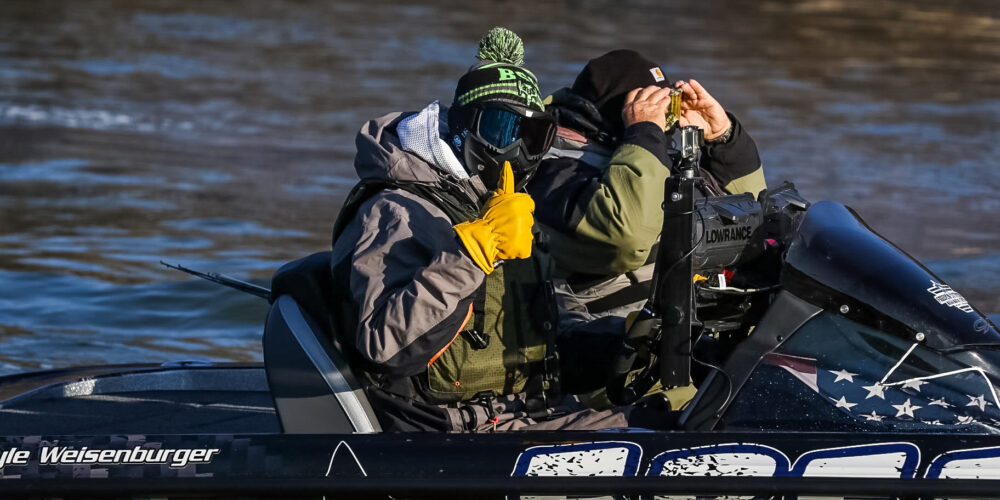 While Lake of the Ozarks is a familiar fishery in MLF competition, things are different this time around, mainly due to recent extreme cold weather that gripped the region and only recently relinquished its hold.

A week ago, the lake was covered with ice, and there were doubts about whether the tournament could even happen. Even this week during practice, many pros shared videos to social media as they broke through thin layers of ice to begin their days. The tournament is a go, though, as boaters and Strike King co-anglers had to wait an extra hour this morning as an additional safety measure.

Throw Out Your History

While Lake of the Ozarks is a frequent stop, it’s traditionally been an October staple to conclude the season. You’d have to go back to March of 2013 to find any history of how the lake will fish in March in MLF5 competition. Mark Tucker won that even with 62 pounds over three days. Last year’s second stop in the BFL Ozarks Division was held in mid-March and was won by Cory Steckler with 18 pounds, 7 ounces.

Neither of those events was fished with these unusual circumstances, but the good news is that the weather is heating up by the day and the bass are anxious for spring to begin. Today’s forecast calls for a high near 70 degrees with plenty of sunshine to continue the thaw.

This year’s frigid weather was highly unusual for March, and how the weather will impact the bite is something yet to be seen. Add in the low water levels and the anglers competing this week will truly be put to the test.

Indiana’s Todd Hollowell has been to Lake of the Ozarks many times, but never under these conditions. He believes it’s going to be a real test for the anglers fishing this week.

“When you look at the schedule and see Lake of the Ozarks in March, you can’t help but get excited,” Hollowell says. “This lake is full of good fish and is probably the best jerkbait lake in the country. But we have a bass fisherman’s nightmare this week. It’s cold and muddy and I’m not getting a lot of bites.”

The good news is that the weather is getting better each day, and Hollowell believes the fishing should pick up as the week wears on.

“When I got here on Saturday, most of the lake was iced over, and you were limited to where you could fish or even run your boat,” he says. “The cold caused a big gizzard shad kill. I think that may open up some different fishing than we expected, and guys might do well cranking or throwing jigs or even using a spinnerbait. It won’t be the typical Lake of the Ozarks jerkbait deal.”

Some places are a lot warmer than others, according to Hollowell, and that will likely cause a big group of anglers fishing the same water.

“It’ll fish small,” he says. “The wildcard is someone who gets on those big schools out deep and figures out a way to catch them. They’re out there, and it could happen this week.”

Arizona’s Hawk doesn’t have extensive local knowledge of this fishery, but he’s had success on Lake of the Ozarks. His lone visit was a mid-March Toyota Series event in which he finished third after leading the first two days. He reports a challenging practice with more questions than answers.

“I caught one bass in four days; it was brutal,” Hawk admits. “I did a lot of looking, but I was trying to catch them. In theory, the fishing should get better and better each day as it warms up, but I haven’t seen it happen yet.”

McDonald’s practice wasn’t much better, and he was still seeing ice as late as the last day of practice on Wednesday.

“There has been ice on the water every day because the water temperatures are still so cold,” McDonald says. “The massive shad kill has made normally good areas of the lake not productive. It’s hard to see just how good your areas are in practice this week because if you get a bite, you run and look for more.”

Bohannan agrees that the extreme cold has hurt the fishing, but there’s also another factor at play.

“The low water levels are just as much a factor working as the cold is against us this week,” he says. “The lake is 6 or 7 feet low and it came down so quickly. That’s just as hard on the fishing quality as the cold.”

Tournament predictions always run the risk of being wrong, but in these circumstances, it’s anyone’s guess as to how the event will unfold. One thing that isn’t in question is that someone will find the winning fish and claim the victory at the first Plains Division event of 2021.

When asked for some predictions on the unpredictable, here is what Hawk, McDonald, Bohannon, and Hollowell had to say.

“This is purely a guess, but I think if you could get 9 pounds the first two days, that you’ll make the top 10,” Hawk says. “My guess for winning weight is 32 pounds for three days. I know this lake has some big fish, but the water temperatures I’ve seen are still in the high 30s and low 40s. There will be some guys who camp on one spot and catch them, but it’s not going to be easy.”

McDonald believes it will be a little better.

“It’s still Lake of the Ozarks and the lake is plumb full of nice fish,” he says. “I think it’ll take at least 15 pounds a day to win this one.”

Bohannan thinks it’ll be a little lower than McDonald guessed.

“Normally, it takes 18 or 19 pounds a day to have a chance to win a spring tournament here,” he says. “It’s going to be way off from that, and I think 13 pounds a day will get it done.”

Hollowell believes there will be several anglers with good bags to go with mediocre ones.

“I think there’ll be a handful of guys that catch bags in the high teens or even over 20 pounds,” he predicts. “It’ll be hard to back that up and do it every day. I also think the weights will drop dramatically after that group of anglers who finds them.”

Format: All boaters and Strike King co-anglers will compete for two days. The top 10 boaters and co-anglers based on cumulative weight after two days of competition will advance to the third and final round, with the winner determined by the heaviest cumulative three-day weight.