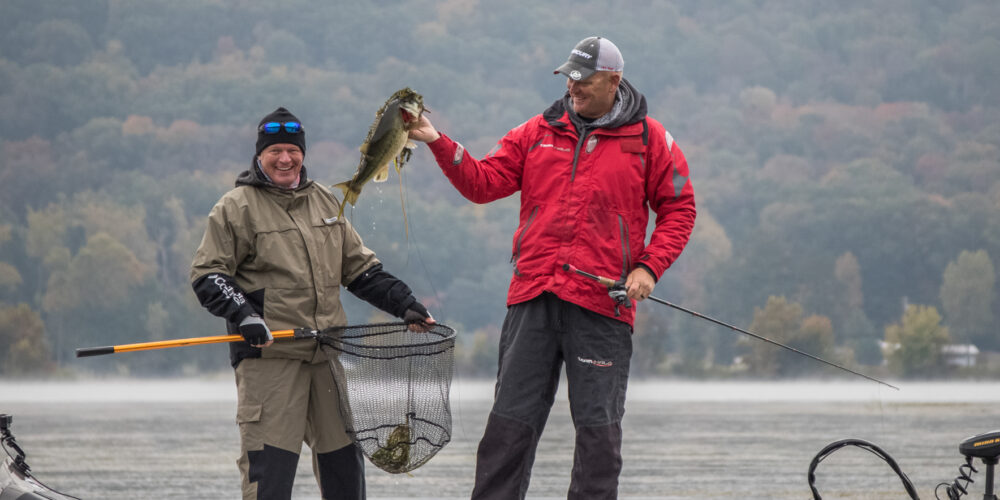 GUNTERSVILLE, Ala. – The last time the FLW Series Championship headed to Lake Guntersville was in 2018, and the tournament turned out to be pretty epic. With Day 1 canceled due to bad weather, the event was shorted into a two-day sprint for the title. Leading off, Carl Jocumsen slung a glide bait for a big bag and the lead to get things going. On the final day, with crispy temperatures and patchy fog mixed with the fall foliage, Kyle Walters roared up from second place to the win with over 24 pounds he caught punching. Taking home more than $90,000, the Floridian came away with his second big fall win on Guntersville, both by way of the big weight.

Next week, the 2022 Toyota Series Championship at Lake Guntersville Presented by A.R.E. will kick off with more than 190 boats from around the world. Shooting for a top prize of up to $235,000 cash, the anglers are likely to hit G-Ville at a good time to showcase the fall fishing.

Since he moved there, Bass Pro Tour newcomer Jacob Wall has fished Guntersville a lot, and this year is no exception. The young pro keeps close tabs on the fish there and says things are going well, though the tournament won’t be the whackfest that folks saw when the Tackle Warehouse Pro Circuit was there in the postspawn.

“I think as far as the fishing goes, it should be pretty good overall,” Wall said. “It will be more of a grind, but guys will catch big ones, and there’s a lot of matted grass. So, flipping and frogging will be good. And, a jerkbait, spinnerbait, (umbrella rig), all that stuff will play, too.”

Back in 2018, pros used the entire lake to good effect, with Jocumsen leading a day south of Guntersville, Bryan Thrift finishing second in Browns Creek, and Walters winning above the B.B. Comer Bridge.

“I think the whole lake will play,” Wall said. “The B.B. Comer area is always good this time of year, that area should definitely play. But, there’s a lot of fish to be caught from Goose Pond all the way down to Alreds, and I haven’t fished Honeycomb lately, but it’s usually good, too.”

The 2018 championship on Guntersville didn’t feature a big forward-facing sonar pattern, but that could change this time around. With better technology and more experts in the field, it’s likely that some anglers will hone in on bass chasing shad.

“You can catch some schooled on bait pretty good, on humps, ditches and points,” Wall said. “They were schooling on the surface a few weeks ago pretty good, since we got the cold weather it has shut them back down. They’re still out there, but they aren’t blowing up on top as much.”

Of course these days, you don’t need to see them on top to catch them; so it’s worth throwing an eye on that pattern.

There’s a lot to do in the grass

Guntersville in the fall is probably best known for a frog bite and a punching bite, and both those staples should play pretty well.

“The majority of the lake has eelgrass on everything, out to roughly 10 or 12 feet of water,” Wall said. “It’ll produce fish year round, what you look for are holes and edges. Holes that are shell bars are a big deal in the eelgrass.

“Hydrilla is a big deal too, but that’s harder to find,” he said. “If you run around and look at the matted stuff and keep your eyes open, you can find pretty good hydrilla.”

For a good frog bite that lasts three days and doesn’t result in heartbreaking misses, Wall thinks some grass back in the creeks might be the answer.

“There are certain times where you’ll find them in creeks, in thinner, sparser mats, and those fish typically get your bait pretty good,” he said. “If you’re trying to frog over the hydrilla, that’s not ideal. You want to have either cheese, or you want to have milfoil for that frog to be good. The milfoil is predominantly in the creeks. The main river grass, when you find the good stuff, it is normally going to be hydrilla. From what I’ve seen, the good stuff is going to be in the creeks for frogging.”

With nearly 200 excellent pros about to descend on the lake, it’s a sure bet that someone will figure out how to be consistent in challenging fall conditions. Whoever does it best will head home with an extra $200,000 or more in their bank account – by far the biggest payout available at the triple-A level.