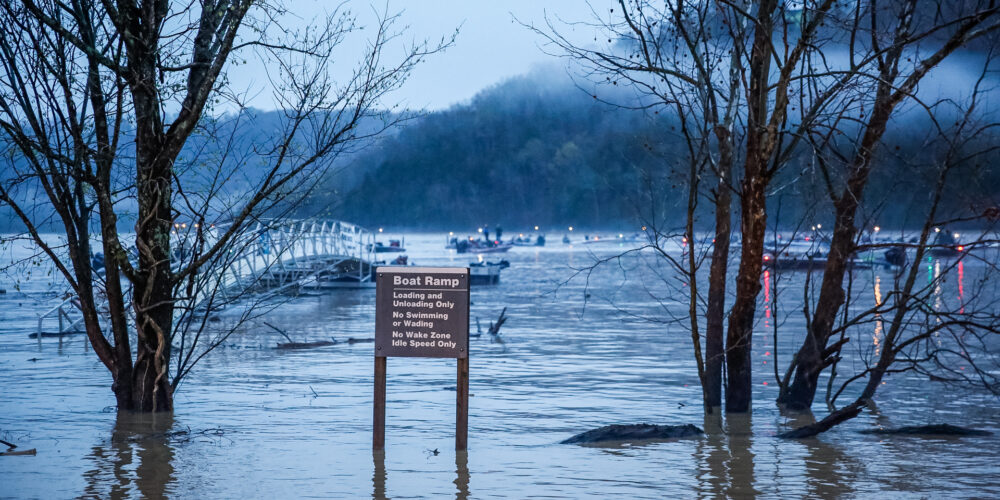 Last weekend’s multi-day deluge has plunged Dale Hollow into a state of unusually high, unusually muddy water. Luck being what it is, more rain has already landed with the arrival of yet another early-spring storm front that should persist throughout the morning of Day 1 of the second Toyota Series presented by A.R.E. Central Division event of the 2021 season.

The lake level as of publication of this article is 655.33, which is well above normal lake levels for this time of year and 4.33 feet above full pool. Prior to last weekend’s major rainfall event, Dale Hollow was more than 7 feet lower (648 feet). There’s a good chance those numbers continue to increase over the next couple days as area rainfall rushes into the Cumberland River reservoir.

With the rain comes masses of floating debris and water color closer to strong coffee than bottled water. In addition, air temperatures are expected to fall well into the 20s overnight heading into Day 2 of the event with highs in the mid-40s on Thursday.

Add it all up and the Central Division, which is presented by Neat Companies, anglers are facing conditions that make any practice time prior to Sunday all but worthless. The playing field is about as even as any in recent memory.

Because it’s a flood control reservoir, water levels at Dale Hollow can fluctuate enormously, though usually the change in water level is much more gradual than we’ve seen over the last few days, even in the spring. The Tennessee Valley Authority is going to be pulling water this week, but lake levels aren’t predicted to drop more than a few inches in total.

Rocky with plenty of shoreline cover (and usually ample grass), there’s almost always a shallow bite to be had at Dale Hollow, especially in the lake’s many creeks (like Sulphur Creek) and major tributaries (like the Wolf River). With fish moving up to spawn and water in the bushes, it’s a good bet that much of the field is going to be focused on finding those shallow prespawners and spawners.

Nick Ratliff, who finished sixth at Dale Hollow in the 2020 Central Division finale and who calls the lake his home fishery, is especially puzzled by the current conditions the field will be facing this week. He knows Dale Hollow well – at least well enough to know that huge influxes of water aren’t typically beneficial for the fishing.

“This lake doesn’t really react well to a quick change like this,” he explains. “This lake typically comes up slower, and the two times the water’s come up so far this spring, it’s been big events. Both times it’s really messed with it.

“It’s really going to level the playing field. The last time we had water this high it was 2019, but it was a lot earlier than this and it came up 2 feet at a time over several rain events. Factor in the cold front we’ve got coming and it’s going to be interesting.”

Like Ratliff, last year’s winner, Adam Wagner, is a hammer on Dale Hollow, and while he found some good fish in practice, he’s not all that optimistic about his program.

“I’ve been up in the bushes and I’ve patiently waited for them to get up on beds, but it doesn’t seem like it’s going to happen,” he says. “It’s going to be tough. I’m comfortable getting in the trash and the trees and trying to get five bites a day. Live or die with it. It may work, it may not.”

Regardless of the current conditions, big bass are trying to move shallow to start spawning. With high water and plenty of new cover (which is unlikely to change before the end of the tournament), there’s still a chance the shallow bite ends up being the deal.

For anglers looking to avoid flipping miles of shoreline for five bites or who don’t want to contend with chocolate-milk water color, there’s still some clearer water on the main lake that could lend to a solid jerkbait or umbrella rig bite out on points in deeper water – a staple on Dale Hollow almost year-round. Even a Carolina rig on those same gravel points could play.

For everyone else, it’s probably going to come down to a spinnerbait and flipping baits up in the bushes to target spawners. That’s what Drew Boggs plans to do, focusing primarily on pockets and cuts in which he expects fish to either already be spawning on preparing to move up.

Boggs finished eighth at Dale Hollow last fall, and he did so by running way up the Obey River to avoid the crowds and find a consistent shallow bite. This week, that’s likely not going to be an option.

“I was hoping to find something (in practice) that scares everyone else, but it just wasn’t happening,” Boggs says. “This lake has humbled me several times in the past and it very well might do it again.

“I think these fish are wanting to be [on the bank]. The fish I caught in practice look like they’re about to pop. I’m going to focus on those spawning pockets off the main river.”

Wagner agrees with Boggs’ assessment and figures someone is going to get on the right fish at the right time this week.

And that’s really the biggest factor this week: As bad as the conditions are proving to be, Dale Hollow contains some excellent quality, and those fish have to be somewhere.

“The biggest stringer I ever caught off a bed was March 31 a couple years ago,” Wagner recalls. “I still don’t know that they won’t pull up, but it hasn’t happened yet. They don’t all have their nose up on the bank, but I have a feeling quite a few of them do.”

Boggs agrees, noting that he’s never fished Dale Hollow in the spring, but he knows they’re going to be a shallow bite at some point.

“I’ve never been here around the spawn,” he says. “For me, it’s just trying to find an area that has a bunch of fish in it. I feel like the fish should be moving up, and today is not as good as tomorrow will be and tomorrow not as good as the next day.”