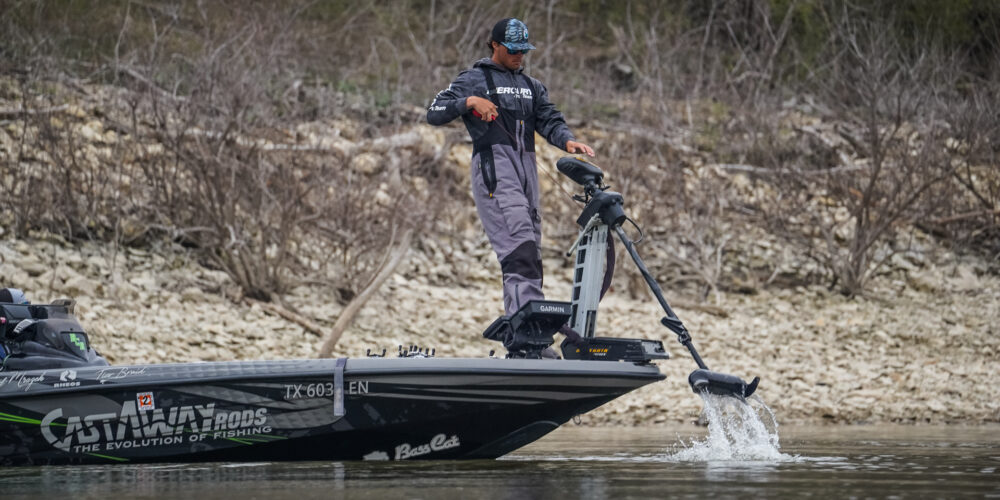 The Toyota Series presented by A.R.E. Southwestern Division event on Lake Texoma was undeniably tough fishing, and getting a limit each day was extremely difficult. Sometimes, that means everyone ends up doing similar things, but that wasn’t quite the case with this Top 10. Instead of the entire field grinding with an umbrella rig or a jerkbait, the pros spread out in search of keeper smallmouth and largemouth bites, using everything from a spinnerbait to a shaky head.

Evan Barnes earned the win with a big swimbait, a lipless and an umbrella rig, but his way wasn’t the only way. Here’s how the rest of the Top 10 caught ‘em on Texoma.

Cameron Mattison has been to Texoma twice and is averaging better than a second-place finish so far. Back in 2013, he and his partner won the High School Fishing Southern Conference Championship in the fall on Texoma. This week, he added to his sterling record on the border with a runner-up showing.

“I was fishing around rock points and rip rap and around boat docks – behind them,” Mattison says. “I was trying to target a little bit deeper water that was right by the bank, I feel like those fish pull up first. For the dock deal, I was throwing in and around docks, and under the walkways, just trying to get back in behind them and get fresh fish.”

Throwing a YUM YUMbrella Flash Mob Jr. with 3.8-inch Jackall Rhythm Wave swimmers, Mattison caught 90 percent of his fish on a golden shad color bait he ran in the middle between regular shad colors. He also caught a few fish on a black and blue V&M Chopstick that he fished on rock and wood with either a shaky head or a Texas rig.

3. Versatility Keeps Cline in the Hunt

Billy Cline needed his whole tackle box to put together a Top 10 on Texoma. Between Day 1 and the final weigh-in, Cline caught fish on multiple finesse worms, a crankbait, an umbrella rig and a spinnerbait.

On Day 1, Cline caught his fish on an umbrella rig and a Strike King HC 2.5 in the green gizzard color. On Day 2, Cline mixed in a white War Eagle Spinnerbait and a ¼-ounce shaky head with a green pumpkin Zoom Shakey Head Worm. On the final day, a spinnerbait again accounted for most of his fish, but his final 4-pounder fell to a flick shake with a black and blue Zoom Trick Worm.

Cline’s targets were as diverse as his bait choices. From spinnerbaiting marina docks to cranking transitions, he also caught fish off hard bottom patches, bushes and laydowns.

“I changed it up every day,” Cline says. “Texoma is like that. It took me a long time to understand, on a three-day event, you have to move around and change a lot. When I caught that 4-pounder, I thought I would win because I know how hard it is to do one thing for three days on that lake like Evan [Barnes] did.

“It looks good on paper,” Cline says of his final tally. “But I just stumbled and bumbled my way through it. Texoma is like that, it was a tough tournament.”

Certainly averaging the best quality of anyone in the Top 10, Shawn Temple put 11 bass on the board for an even 35 pounds. Averaging more than 3 pounds per fish, a few key losses handicapped him in his quest for a win.

On the bait side of things, a Z-Man Evergreen ChatterBait Jack Hammer with a Yamamoto Zako did the most damage by far, with a craw-colored Berkley Frittside 7 and a flipping bait also coming to play. On his vibrating jigs, Temple caught a few on a B. Hite delight but did most of his work with the Hite’s hot craw color.

Fishing steeper bluffs and banks with larger rock, Temple targeted areas on the main lake for smallmouth and steeper parts of the creeks for largemouth. His vibrating jig bite was best the first two days, and he thinks he was mostly fishing in 6- to 8-feet, really keying in on larger rock, not just chunk rock or pebbles.

“I kinda got on a pattern, but it was one here, one there,” Temple says of his vibrating jig strategy. “I put it on 15-pound test, I was fishing it a little deeper. I was trying to reel it slow to tick the rocks. It was almost like grass fishing, once you hit the grass, you keep reeling to get it to dart. That’s what was going on, I was hitting those rocks, and as it would hit those rocks, it would dart off them. As it would dart off is when every bite came.”

5. Another Near Miss for Schroeder

Blake Schroeder has finished in the Top 5 in two of the last three Toyota Series events he’s fished. In between, he picked up his second Phoenix Bass Fishing League win, but he’s still itching to close the deal at the next level.

“It’ll come eventually, but it just wasn’t my day,” says Schroeder. “It was tough, the wind killed me yesterday, if it was cloudy and windy it would have been good, but it was so still, it didn’t do it for me.”

Fishing a  YUM YUMbrella Flash Mob Jr. with 4-inch Keitech Swing Impact swimbaits and a 5-inch black and blue Yamamoto Senko on a 1/8-ounce Texas red, Schroeder had a pair of patterns working.

In addition to the shallower umbrella rig fishing, Schroeder had one particular spot with stumps and a concrete pad that he dragged his Senko on. Come the final day, with no wind to set the fish up, that spot proved fruitless.

Weighing the biggest bag of the tournament on Day 2, Chad Mrazek surged into the Top 10 only to be foiled by a brutal final day.

“It was pretty simple, I’d never been on Texoma, I just wanted to find something I was comfortable with,” Mrazek says. “I found some muddy water, I knew I was around some good ones, and if I could get five they would be a good five.”

“It’s low, I was looking for anything I could find,” Mrazek says. “I was actually using my Perspective mode on my Garmin a ton. There’s a lot of bare bank, and it’s easy to overlook that stuff. I had my Perspective mode running a lot, just looking for brush or small differences in the bottom composition. If you look at the banks on Texoma, you’ll see it, and the same thing happens underwater. It seems like the bigger females that hadn’t all the way pulled up would sit on some of that.”

With his range set to 40 feet, Mrazek would burn down the banks, casting his crankbait at transitions and flipping to brush or other juicy targets he spotted. For all his presentations, Mrazek used CastAway Rods.

Weighing over 15 pounds on Day 1 and trailing off from there, Mitchell Webb used an umbrella rig like many others and also mixed in some hard targets.

“I was starting off every morning throwing an A-rig on a channel swing bank,” Webb says. “From there, I’d move to some shallow spawning pockets and I was catching them off docks or laydowns or anything in the water. With the water low, they were setting up on whatever they could get on.”

For his umbrella rig, Webb used a KC School’em Umbrella Rig with five wires and extra blades instead of teasers on the two blank arms. Rolling with 1/4-ounce jig heads, he used 3.8-inch Keitech Swing Impact FAT swimbaits in French pearl. In his pockets, Webb used either a 1/8-ounce black and blue jig with a Berkley PowerBait Meaty Chunk, an Okeechobee craw-colored Strike King Rage Bug on a Texas rig or a ½-ounce  Z-Man/Evergreen ChatterBait Jack Hammer.

Failing to establish a pattern other than boat ramps, Tackle Warehouse Pro Circuit pro Tommy Dickerson capitalized on them the first two days, but saw his bite tank on the final day when Saturday traffic made many of his ramps too busy or too disturbed to fish.

“I would get to one side of the ramp and throw across it and pull up the rocks,” Dickerson says. “They were mostly about 4 to 6 feet deep, and it seemed like they would bite it when you came off the rocks on the corners.”

Throwing a ½-ounce Megabass Dark Sleeper in the Shirauo color the entire time on two points, Wesley Dawson went down swinging on the smallmouth bite.

“It was a tough tournament,” Dawson says. “I stayed exclusively with one bait the entire tournament, that thing is designed to stay down and bounce along the bottom and rocks, so that’s what I was doing. I’d just jerk it up, and when I did get a bite, it was on the fall. I’d hop it up, and they’d catch it on the way down.”

On the final day, Dawson thinks the lack of wind and inability of his areas to reload sank his hopes.

“I used a crankbait on Thursday, and then we got some rain, and the water got really dirty, so I changed it up,” Ware says. “I just went and stayed in the dirty water, I was probably the farthest angler north, I was up in Newberry Creek. That was the only place I could get a bite in practice, and I mean a bite. I struggled everywhere else, but it was 1 to 2 degrees warmer than the other creeks, and it’s the only thing I can figure.”

Winding shallow allowed Ware to tally 12 pounds each of the first two days, but he was stymied on Day 3.

“I don’t have a lot of experience with smallmouth and clear water, so I stayed away from that on purpose,” Ware says. “But, my area was pretty small, I think I just simply ran out of fish. I was hoping I had more coming to me, but it just didn’t happen.”