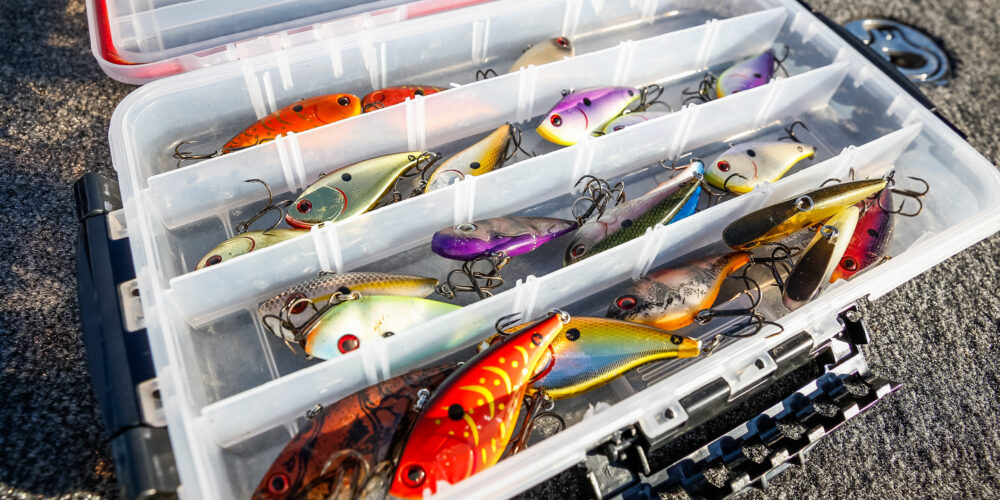 Amazingly cold weather for the South created serious challenges for the more than 400 pros and Strike King co-anglers fishing in the Toyota Series presented by A.R.E. Central Division opener on Lake Guntersville. The first morning anglers launched with the thermometer sitting at 18 degrees. After a week of practice, many anglers already knew they were going to have to fish hard for relatively few bites. Sometimes you might expect anglers to go different directions on baits and patterns under such conditions, but on Lake Guntersville most of the anglers ended up reading out of the same playbook.

1. Jimmy Washam stood out in the crowd, seemingly cruising to a wire-to-wire win. The one lure Washam depended on most was an Azuma Shaker Z (Aztec color). He also fished an “unnamed” bladed jig, which was especially important in the afternoons.

2. Sloan Pennington relied most heavily on a ½-ounce BOOYAH One Knocker in Rayburn red. “That’s about the only thing I could get them to eat. Also, it’s easier to work through the grass and I can feather it over it. I can fish it a little bit slower,” Pennington says. “I tried to get them to eat everything else in the tackle box and they wouldn’t eat it.”

3. Jeff McLain had two baits he keyed in on the most, depending upon where he was fishing. He said his favorite was the Strike King 1.5 squarebill crankbait, but when he started fishing in shallower water with eelgrass, he would switch to the Jackall TN 60 lipless crank.

4. Ethan Greene says he became a believer in the Berkley Frittside 5 while he was practicing on Guntersville.

“It’s just the one I started throwing in practice and built some confidence on, and confidence means a lot,” says Greene, who saw the difference on competition days. “When my co-angler was throwing a different brand that had a little bit different wobble, they didn’t get near the bites I got. I could throw it in the same places he threw and I could get bit and he couldn’t. I know it makes a difference but I don’t know what about it makes a difference.”

5. Like Pennington, Brennan McCord spent most of his time casting a BOOYAH One Knocker. Instead of Rayburn red, however, he was using the royalty color.

“I couldn’t get bit on red this week,” McCord says. “Everything I could catch was on purple and white.”

“The [Rat-L-Trap] doesn’t vibrate as hard as some of the newer ones and I think that helps in the cold water,” Hall says. “They just bite it here. I’ve got a lot of confidence in it.”

7. Like others, Terry Fisher found that the BOOYAH One Knocker was the most important tool in his arsenal, although he did catch a couple of his fish on a bladed jig.

8. Mickey Beck broke the mold this week as the only top pro who was ledge fishing offshore. It served him well the first two days but failed him on the final day. Beck spent all three days staring at his Garmin LiveScope and watching an umbrella rig roll over the ledges.

“I really wasn’t using any particular brand of A-rig,” he says. “Whatever it was I usually rigged it with 3.3-inch Keitech Swing Impact FAT swimbaits. The secret was that I had to use really light A-rigs and I actually had to cut the blades off. If you didn’t the current would take the A-rig on down the river.”

9. Cody Nichols says he switched back and forth between two lipless crankbaits, the original Bill Lewis Rat-L-Trap and the BOOYAH One Knocker, both ½ ounce. The One Knocker was the gold shiner color and the Rat-L-Trap was what the company calls the ‘Cali craw’ color.

“Which one really didn’t seem to matter,” he says. “I just switched up depending on if it slicked off, or if the wind blew or how clear the water was.”

10. Steve Lopez switched baits some, largely using the Bill Lewis Rat-L-Trap on day two (in the B.E.R. Trap color).  But the favorite lure he relied on most to make the top ten was a 3/8-ounce Z-Man/Evergreen ChatterBait Jack Hammer.

“It just bumps harder than other ChatterBaits,” Lopez says. “It vibrates faster than most others so it gets up to speed quicker. The bait is moving quick down there so I think they’re just reacting to it.”