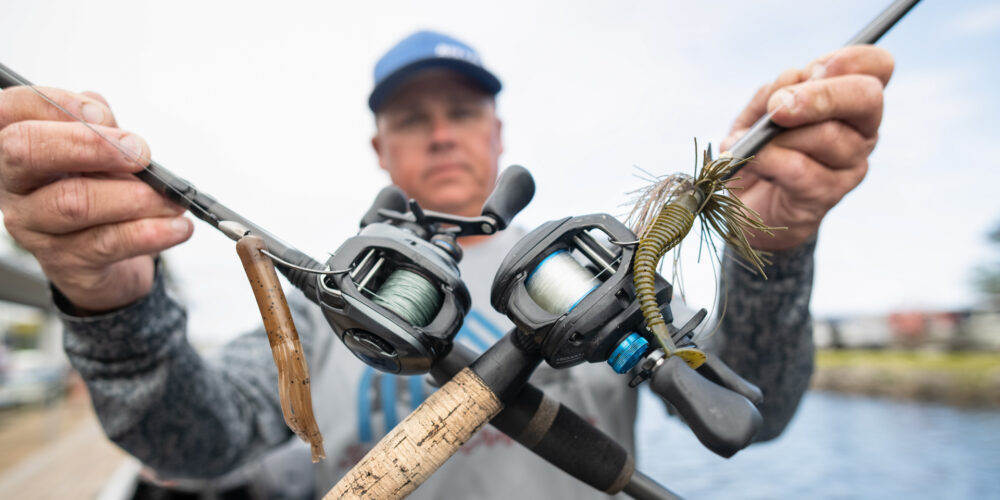 Lee Stalvey and the rest of the Top 10 relied on many staple baits and some oddballs for Okeechobee success.
February 7, 2022 • Justin Onslow, Charles Waldorf • Toyota Series

Few fisheries in the country have the simple staple baits Lake Okeechobee does. When you’re at the Big O, you better have some stick baits and a ChatterBait rod on the deck or you’re probably getting waxed by anglers who do.

The first event of the 2022 Toyota Series Presented by A.R.E. season proved that, as nearly every one of the Top 10 pros in the 271-boat field employed some combination of vibrating jigs for winding and stick baits for flipping to catch their fish.

Whether fishing fast and aggressively or slow and methodically, the 10 best all got it done leaning on tried-and-true techniques and Okeechobee staple baits.

1. Rob Branagh planned on upsizing to catch some bigger fish on Day 3, but he didn’t have much reason to – his NetBait Big Bopper kept catching him bigger and bigger fish with each cast. He soaked the Okeechobee craw-colored swimming worm in Bait Fuel attractant and added a 1/8-ounce tungsten weight rigged on 15-pound-test Sunline fluorocarbon spooled on a KastKing MegaJaws reel with a 6-foot, 6-inch Halo XD III Pro rod.

3. Lance Pemble caught most of his fish on a wacky-rigged Yamamoto Senko (watermelon candy) on a No. 2 Gamakatsu hook, which he rigged on a Dobyns Champion XP 703 paired with a 2500-size Shimano Stradic CI4+ reel and a 15-pound-test Seaguar AbrazX leader. He also caught some fish flipping with a 7-inch Yamamoto Senko (junebug) with a 5/16-ounce tungsten weight and a 4/0 Gamakatsu Super Heavy Cover hook on 25-pound-test Seaguar AbrazX, which he spooled on a Daiwa Zillion reel (8.1:1) paired with a Dobyns Champion XP 765 rod.

4. Chris McBeath weighed in the largest bag of the tournament on Day 3 with a Z-Man/Evergreen ChatterBait Jack Hammer (green pumpkin) and a green pumpkin blue flake Yamamoto Zako trailer, which he had tied to Seaguar InvizX 20-pound-test fluorocarbon line on a Shimano Metanium reel and a Denali 7-foot, 6-inch medium-heavy rod.

5. Brandon Medlock notched his fifth-place finish by flipping – you guessed it – a Medlock Jig (1 ounce) in black-and-blue with a Zoom Big Salty. He also found some of his fish in practice with a Texas rig consisting of a new hook-tail worm he’s designing called the Lil’ Chub (Christmas tree color).

6. Lee Stalvey used a two-pronged attack to secure his Top-10 finish, sight-fishing bedding fish with a 4-inch tube bait on a 3/16-ounce weight and 50-pound-test braid and using a 1/2-ounce ChatterBait to cover water while searching for beds. He used custom rods made for him by his son for both techniques.

7. Bryan Honnerlaw fished as Okeechobee as possible this week, using a trio of Gambler baits – a Big EZ, Mega Daddy and Fat Ace, all in the gold rush color. His main setup was 50-pound-test TrikFish Pitch-Black Braid and a 7-foot, 11-inch heavy Halo Black Widow rod.

9. Willy Dennison alternated between flipping and winding throughout the event. For flipping, he leaned on a Bitter’s Baits stick worm (black blue tail) with a pegged 1/8-ounce tungsten weight on 50-pound-test KastKing braid. For winding, Dennison used a 1/2-ounce Z-Man/Evergreen ChatterBait Jack Hammer (BHite delight) with a green pumpkin Yamamoto Zako trailer. He threw both on Kistler rods and Lew’s reels.