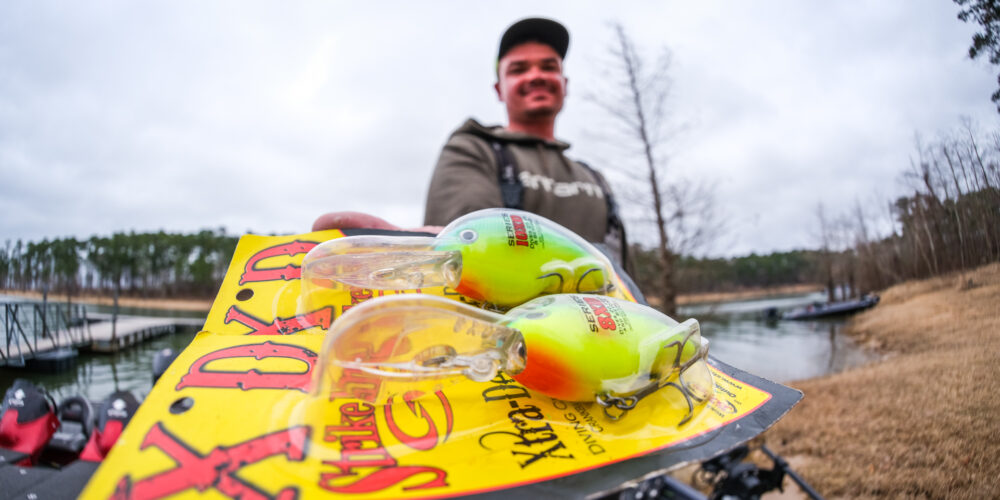 The Toyota Series presented by A.R.E. season kicked off in a big way for 2021. The Southwestern Division event on Sam Rayburn, which was presented by Berkley, had it all. Thirty-pound limits, double-digit bass and tried-and-true Rayburn patterns set the bar high for the rest of the season.

Though a few of the top 10 anglers tapped into an offshore bite, the rest of the top pros on Rayburn exploited grass to help bulk up their bank accounts.

Here’s a look at the tools used to put Rayburn bass in the boat.

1. Derek Mundy has been on fire in the month of January and it’s largely thanks to the time he’s put in offshore. Though he weighed some fish off a Carolina rig with either a Zoom Double Ringer or a Lake Fork Ring Fry Worm, the main star for Mundy was a Strike King 8XD cranked on hard spots.

3. Aaron Johnson won a Toyota Series event on Rayburn last fall fishing shallow grass and he stuck to that again for his top 10 performance. Johnson threw a Yo-Zuri Rattl’n Vibe, a Bill Lewis Rat-L-Trap and a Strike King Hybrid Hunter to catch fish staging in hydrilla.

4. Lake Fork guide Jason Conn camped in the Deer Stand all week throwing either a vibrating jig or a 6th Sense Curve Finesse Squarebill to bank his first top 10.

5. Jeff Reynolds fished everything from outside grass lines to the bank with either a Santone Lures Chris McCall Rayburn Swim Jig or a Z-Man ChatterBait Jack Hammer for another Toyota Series top 10.

6. Fishing primarily the inside grass line, Garrett Hilton locked a Bill Lewis Rat-L-Trap in his hand to land the majority of his fish. However, a few big bites came on hard spots offshore with a 6th Sense Crush 500DD in the gizzard shad color.

7. Doing some early practice for the upcoming Bass Pro Tour Stage One event on Rayburn at the end of March, Jeff Sprague knew a lipless crankbait and grass would be a solid bet. He preferred to cover water with a Strike King Red Eye Shad Tungsten 2 Tap to give the bass something more subtle than what the majority of anglers were using in the same areas.

8. Lowell Bennett used a lipless crankbait – a Yo-Zuri Rattl’n Vibe – but his main bait was a Strike King Thunder Cricket, which he threw in shallow, dirty water in an effort to get away from the crowds.

9. Kevin Lasyone stuck with what he knows best for another Rayburn top 10. Dragging it around stumps, a V&M Pacemaker Football Jig (sneaky snake color) with a green pumpkin craw trailer was the ticket.

10. Making the top 10 in his first MLF event, Brandon Flowers used a swim jig and a Z-Man ChatterBait Jack Hammer with a Reaction Innovations Skinny Dipper trailer to run points at the mouths of major spawning creeks.