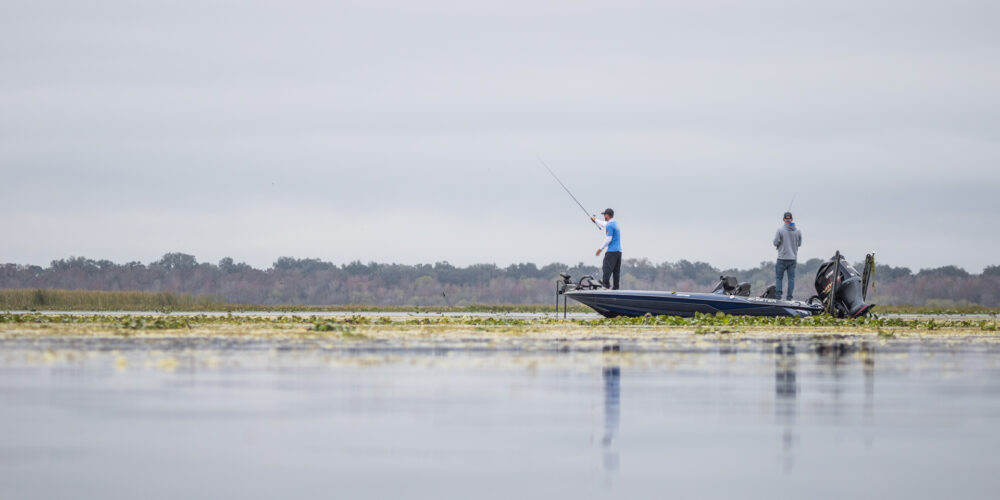 The Toyota Series presented by A.R.E. kicked off the Southern Division last week with an event on Lake Toho presented by Googan Baits. Most of the event unfolded in the wake of a wicked cold front that passed through central Florida during practice, dropping water temperatures into the mid-50s during the tournament days.

Cold fronts in Florida are a double-edged sword. On one hand, they crater the overall bite drastically. But on the other hand, they significantly limit pattern choices, making lure selection much more simple. At the point the water temperature drops below 58 degrees, there are just a few options to consider. One is a hard bait reaction bite out in deeper, more stable water. Another is punching a big weight and small plastic in mats. And the third is dragging a worm with a light weight around very slowly.

Take a look the patterns from the Top 10 at Toho and all three are represented, starting with winner Bryan Schmitt, who used a lipless rattler, wacky worm and swim jig to dominate the event. Behind him, nine other pros found a cure for cold-front conditions to score a Top 10.

Mikey Keyso did what few others could do for three days at Toho: improved his weight each day, bringing in limits of 16 pounds, 6 ounces, 20-1 and 22-1, respectively to finish second with 58-8.

Step one was to throw a ¾-ounce 6th Sense Quake in scattered grass and shell bars for the earliest and coldest part of the morning. This allowed him to get a few keepers in the well to get his day started.

After the day dawned and temperatures warmed, step two was to move to matted vegetation and punch a black and blue Reaction Innovations Sweet Beaver topped with a 1 ½-ounce Hawg Tech Tungsten tied to 65-pound Fitzgerald Fishing Vursa Braid. Most of his better fish over the last two days came from the second step.

Bobby Bakewell led the event after day one with 26-13 by focusing his efforts on the offshore hydrilla game in both Toho and Cypress. Instead of firing up the schools with a lipless rattle bait, he chose to make his initial casts with a Zoom Magnum UltraVibe Speed Worm, topped with a ¼-ounce Flat Out Tungsten weight. He swam the Speed Worm on 20-pound test Yo-Zuri Top Knot fluorocarbon on an Enigma IPPON rod in a heavy-fast action.

After he fired the school up with the big worm, he would then roll a custom-tied vibrating jig by BnB Custom Baits through the grass.

“I felt like the biggest bass in the schools were on the bottom,” he reasons. “I wanted something I could swim down deeper in hopes of fooling the big ones first.”

After that, he would follow up with a 5/8-ounce Yo-Zuri Rattl’n Vibe in silver and black. He fished both the vibrating jig and the Rattl’n Vibe on an Enigma HPT rod.

Steven Hatala had the best of both worlds in Toho by fishing offshore during the morning schooling bite and then moving in to punch mats.

He carried his early fishing out around hydrilla clumps in 7 to 8 feet of water with a ¾-ounce Strike King Red Eye Shad Tungsten 2 Tap, a Lucky Craft Pointer 100 jerkbait and ½-ounce Z-Man/Evergreen ChatterBait Jack Hammer. After taking advantage of the morning bite to put one or two bass in the well, he moved closer to the bank and picked up the big rod to punch.

“I tried to find bedding areas that had the thickest mats around them,” he details.

Eric Conant caught 26-7 on day one to start the event in second place but eventually fell to fifth. He fished offshore hydrilla in the mid-section of Toho in about 5 to 6 feet of water. The hydrilla grew up off the bottom 2 to 3 feet high and he targeted it with a 3/4-ounce 13 Fishing Magic Man Single Pitch rattle bait tied to 50-pound test braid.

“The hydrilla was really clumpy, green and crispy,” he says. “I like to use braid with that bait because I can rip it up out of the grass with a quick snap – that’s what triggers the bite.”

Conant believes his best spot was a staging area that bass retreated to when the water got cold.

“Usually that [lipless crankbait] bite here gets better the colder it gets,” he adds. “I think when it warmed back up, my fish scattered back to shallower grass closer to the bank.”

Trevor Fitzgerald fished his way into another Top 10 by using the Florida cold front one-two punch of trapping and punching in Toho.

His primary gig was punching hydrilla, hyacinth and pennywort mats with a Reaction Innovations Sweet Beaver in a hematoma color on a 4/0 Hayabusa flipping hook paired with his namesake 1 1/2-ounce tungsten weight. His punching weapon was his own 7-foot, 8-inch Fitzgerald Titan HD rod matched with to his VLD 10 8.1:1 ratio reel and spooled with 65-pound Vursa Braid.

Fitzgerald also spent some time fishing offshore scattered hydrilla in 7 feet of water with a ½-ounce XCalibur XR50, which he threw on his 7-foot Fitzgerald All-Purpose Composite rod.

Eric Panzironi did most of his damage in Toho fishing shell bars with scattered grass in 4 to 5 feet of water. His grass arsenal consisted of a 5/8- ounce XCalibur XR50 and a Texas-rigged Zoom Magnum Trick Worm (black) topped with a ¼-ounce weight, both fished on 17-pound-test P-Line fluorocarbon.

One afternoon, he did venture down to Kissimmee and into North Cove to catch a few bass on a Z-Man ChatterBait Jack Hammer (golden shiner) trailed by a Missile Baits Shockwave (shrapnel).

Jared McMillan checked in just 6-12 on day one to start the event in a dismal 87th place. On day two, he rebounded in a huge way with a 22-10 limit, which included a 9-13 Toho titan and rocketed him into the Top 10.

“I ran down to Kissimmee the first day because I really felt it was about to bust with big ones moving in,” McMillan says. “The next day I stayed on Toho, gave myself more fishing time and settled down, which helped do a lot better.”

Samuel Whitmire caught his personal best bass at Toho weighing 11-11 on day one of the event, which was easily the biggest bass of the tournament. He caught that tank on the same lure he used all week: a 6th Sense Divine Shakey Worm in a blood apple color. He rigged the Shakey Worm on several different weights ranging from 1/8- to 3/8-ounce sizes to match the conditions. He pitched them to pads stems on a 7-foot, 6-inch Elite Rod.

Whitmire believes the fish he caught were bedding on pad stems. During practice he got bites on certain stems, waypointed them, then came back and caught fish off the same pads.

During the week he also caught a couple of keepers on a 6th Sense Provoke 106X jerkbait in hydrilla.

On day two, Cole Hewett rallied with a limit weighing 17-1 to make his first Top 10 in the Toyota Series as a pro.

While many Top 10 pros chose to fish out in the main part of the lake, Hewett got in done in the back end of Goblets Cove where the St. Cloud Canal runs into Toho.

“The canal offered deeper, warmer water,” Hewett says. “When it was cold, they were drawn to that canal and tucked up under mats of hydrilla, hyacinth and pennywort. On the last day, when the water warmed back up a little bit, I think they wandered back into the shallows to start spawning.”

When targeting the mats, he used a pair of Missile Baits D Bombs, both in ballistic bruiser. He kept one rigged with a 1 ¼-ounce weight for really thick hyacinth and the other with a ¾-ounce weight for thinner stuff, like hydrilla.