Top 5 Patterns from Day 2 on Guntersville 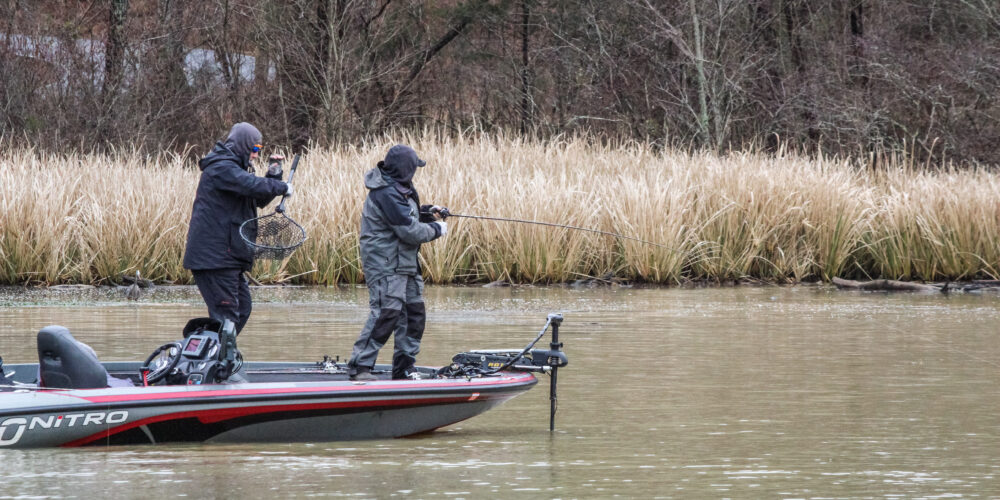 Jimmy Washam maintained his lead on Day 2 of the Toyota Series presented by A.R.E. Central Division opener on Lake Guntersville with a two-day total of 39-6. He’s out in front by more than 5 pounds, and while Washam didn’t have as good a day today as he did yesterday, he was pretty fortunate. Three of yesterday’s top five anglers fell from grace and well outside the top of the leaderboard.

With that, a few new faces enter the fold heading into Championship Friday. Here’s a look at how Washam and the rest of the top performers caught their fish on Thursday.

Sloan Pennington was the one angler who improved on his standing from Day 1, moving from fifth place to second on Thursday. But, like Washam, his weight dropped, going from 19-4 on Day 1 to just 14-14 today.

“It was a whole lot tougher,” he says. “I lost a couple of fish today that definitely would have helped me out. I weighed in a couple of squeakers. I just haven’t come across that really big bite yet.”

Pennington had more pressure from other anglers fishing his area on Thursday than he ran into Wednesday.

“Yesterday, I didn’t have any pressure,” he explains. “That probably had something to do with [a better Day 1 weight].”

The Guntersville staple lipless cranks and bladed jigs have been Pennington’s go-to lures. He says the shallow flats he fished were mostly along the main river channel, but basically the same areas he hit the first day.

“I did expand a little bit more today,” he adds. “Three of the biggest ones I caught today were in the same general area, but in places I hadn’t really fished on it yet. I went up a little shallower and caught a few.”

Pennington thinks he’s going to need to make a change, however, to try and overtake Washam.

“I think in order to take over the lead I’m going to have to do something a little bit different,” he says. “I didn’t really see the quality fish that I was looking for today. I’m just going to tweak a few things and see what I can make work.”

After climbing from 30th place to third on Day 2, 19-year-old Ethan Greene came off the weigh-in stage like a kid at Christmas.

“I just went into a place and kind of stayed in there and focused on that area, caught some key fish and just had a blast today,” he says.

The young man’s style has been to camp out and wait for fish to come to him, even though he admits it’s hard to be that patient.

Greene put more than 15 keepers in the boat for his Day 2 weight of 18-12, mostly fishing a “flat-sided” crankbait.

The Eufala, Ala., pro has fished 11 MLF events, and this tournament will be his fourth top 10 whether he wins or not.

“I’m 19 years old and this is what I plan on doing the rest of my life. This is a dream come true.”

Since he lives in Guntersville and works full-time as a bass fishing guide, Blake Hall has to be a hometown favorite. He climbed two spots from sixth place on Day 2, though he admits his home lake is fishing “pretty tough” right now.

“This weather has been crazy the last week or so,” he says. “The lake isn’t showing its true colors, that’s for sure.”

Hall says he’s concentrating “mid-lake,” fishing the same patterns as normal for this time of year – lipless crankbaits in 4 or 5 feet of water. He’s just not getting nearly as many bites as he would expect, boating 10 bass on Thursday. Plus, he says there are not as many big ones coming to the weigh-in stage as he would normally expect.

As for fishing with the rest of the top 10 on Friday, Hall seems less than optimistic.

“I don’t know. It’s getting tougher every day.”

Mickey Beck made an astonishing leap to make it into the top five after finishing Day 1 in 65th place with only 11-14. He caught the only 20-pound bag of the day on Thursday to shoot up the leaderboard.

“I said I was going to go out today and stick to my guns, and sure enough, I stuck to them,” Beck says.

His “guns” were dramatically different than anything else other anglers seem to have been doing this week.

Beck clearly has broken the mold compared to most other anglers in this tournament, and Thursday it paid off.

“I LiveScoped all day,” he says. “My back is killing me from staring down looking at them, just watching them.”

Beck says fishing deep is his wheelhouse, though, and it shows.

“I didn’t want to fight the shallows with everybody else. I did some flipping and caught some, but the last few days, it hasn’t been working, so I said, ‘Let’s go back deep.”

Beck admits it’s not really a numbers game on a stingy Guntersville.

“I had six keepers, including one Kentucky bass, and it was bigger than the largemouth.”

On Championship Friday, Beck will likely be one of the few anglers – if not only angler – fishing a deep pattern. We’ll find out if “going deep” will end up paying off.