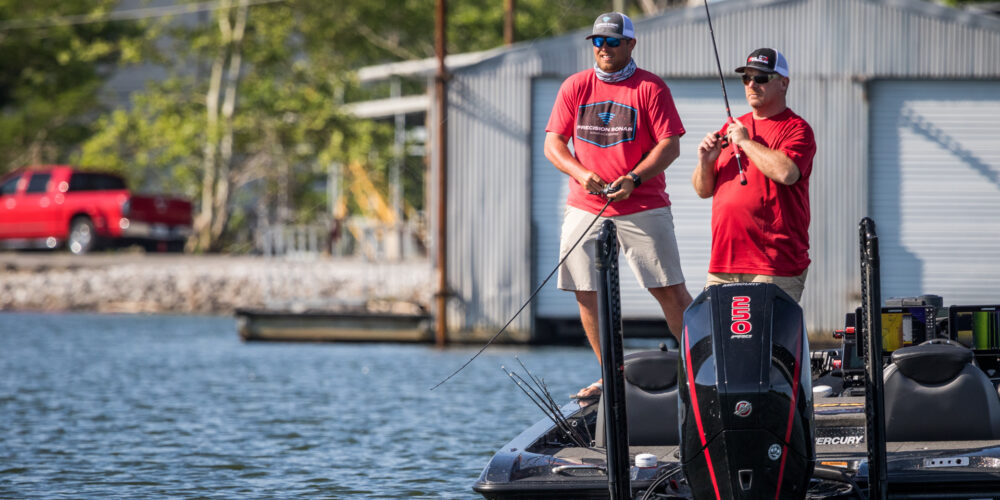 With as tough as the ledge fishing has been in the Toyota Series Presented by A.R.E. event on Lake Chickamauga, it’s no surprise that the Top 10 has a decent representation of patterns. What is a surprise, is just how tough the fishing has been overall – on Day 2, just 99 of 207 pros brought a five-bass limit to the scale.

Leading the way, Andrew Nordbye has stayed off the ledges and tallied more than 18 pounds on back-to-back days. Behind him, there are a mix of patterns and a broad mix of good and bad days.

Here’s how the rest of the top pros are catching their bass.

Putting an even 20 pounds on the scale on Day 1, Jordan Hartman fell off his pace with only 17 pounds, 1 ounce on Day 2. Fishing exclusively offshore, Hartman is doing exactly what you’d expect of a Kentucky Lake local.

“We started off pretty good, at the first place I stopped I caught probably 15 pounds in 30 minutes or so,” says Hartman. “Then we headed on down the lake and started checking some deep stuff. It seems like a lot of the fish are leaving though – I don’t know where they’re going, but they’re going somewhere. I relocated one school today and caught ‘em, and culled one time, but I dunno. It’s not getting better, tomorrow might be tough.”

Mostly fishing a crankbait deep and long-lining it some, Hartman is doing what he’s good at.

“Yesterday they were really deep. Today they kinda slid up on the shallower side,” says Hartman. “Yesterday I caught them on a [Strike King 10XD]. Today I caught them on a swimbait and one on a hair jig. It seems like every day is a little but different. Color doesn’t much matter, it’s more the angle. Once you catch one, you can catch a couple.”

With more fish coming out to the ledges by the day, there’s a good bet that Hartman can put a few in the boat tomorrow. Being just 2 ounces behind the leader, he’s got a great shot to win if he does.

“It’s pretty crazy, I never thought that I would be in this position,” says Hartman. “So, I’m just going to go have fun again and see what happens.”

A bit of a wild card in the Top 10, Jeff Dyer is trying to pull a John Cox. Turning up the river from takeoff both days, he’s put a big bedding bass on the scale two days in a row from.

“I didn’t really have any fish, I just went fishing and got lucky,” says Dyer. “That’s two days in a row I got lucky.”

Throwing a jig and a swim jig, Dyer says finding exactly the right conditions is part of the puzzle.

“The backwater areas with the proper depth is the trouble to find,” says Dyer. “It’s either too shallow or it’s too straight up and down on the bank. You can fish 2 miles of bank, and 100 yards is just right.”

In it to win it tomorrow, Dyer is going to head back up the river and search for a few more. Though he repeated some water today to catch fish, he’s concerned his numbers aren’t what they need to be.

“I just don’t know how many fish there are to find,” says Dyer. “But, I’m going to go do it, I’m not going to run down there and butt in on someone else.”

The man with the most going on this week, Cody Harrison has cobbled together two good days from shallow and deep fish that are all over the board.

On Day 1, he started with a swim jig up the river from Dayton. Basically blanking on that, he decided to play a hunch and fish some grass in the mouth of a pocket nearby.

“I only had two short days of practice this week,” says Harrison, who guides on Lake Guntersville and Pickwick Lake. “I found this spot last week, I was idling toward the back of the creek to fish a swim jig, and I saw there was grass in the mouth of it. Day 1, my co-angler was casting behind me out the back of the boat and caught a 3-pounder in an empty pocket. So, I thought they might be in the grass in the mouth of the other one. So, we went in there, fished around, didn’t get bit, and made one last cast and caught a 15-incher. So, I backed off it a little bit, and threw back out and caught one immediately.”

Next thing he knew, Harrison had four in the boat that he toted around with him as he culled up fishing ledges. On Day 2, Harrison caught four of his keepers from the grass, and discovered a robust shad spawn when he arrived early enough.

“That’s what I’ll probably stick with tomorrow,” says Harrison. “There’s potential up there. I have not figured out that spot to its full potential yet.”

Perhaps the scariest angler in the Top 10 is Seth Davis. One of the premier locals on Chickamauga, Davis boxed 19 pounds on Day 2 to rocket into contention.

“This is my home lake and I put 40 hours on my engine graphing this week,” says Davis. “I found one school that I thought nobody else in this tournament knew about. I started in there yesterday and caught about 13 pounds and stayed there 2 hours.”

After boxing a limit on Day 1, Davis ran perhaps 30 more offshore spots, mostly with aggressive presentations like a crankbait. In all, he culled up another pound and set himself up for a surge on Day 2.

“Today I started on my little school, my sneaky school,” says Davis. “I had a limit yesterday in about seven casts. Today it took me 2 hours on the same place, but I caught a 6-pounder. Today, I stayed and milked it. I burnt it pretty good. I’m worried about that, but I stayed on that school until 11 [in the morning] and when I left, I had 18 pounds.”

Then, running a bunch more offshore fish, Davis culled up to his 19-pound total. Going into Saturday, he’s got a pile of knowledge of the lake and less than 4 pounds to make up. That’s pretty doable on a lake as good as Chickamauga.