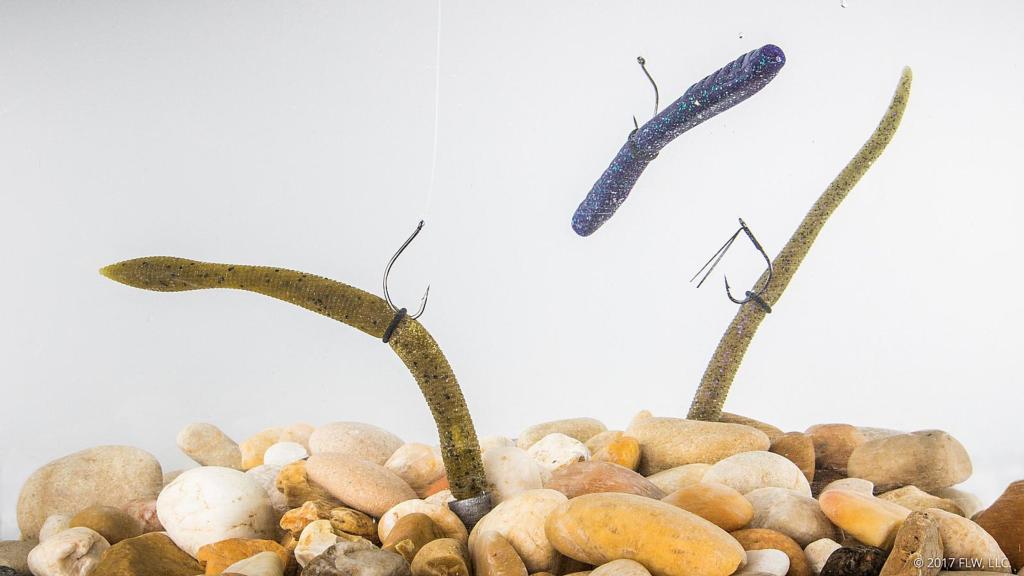 The Neko Rig is a relatively new phenomenon in the bass community. Basically, it is a weighted version of a wacky rig with a weight inserted into just one end of the soft plastic, giving the bait a unique action as it falls and allows it to stand straight up once it hits the bottom. The rig is quickly becoming a staple for many bass pros and weekend warriors alike for one reason – it puts fish in the boat.

So, if you’re new to the Neko Rig or just want to learn a little more, four FLW Tour pros helped give their thoughts on how, when and where they Neko. 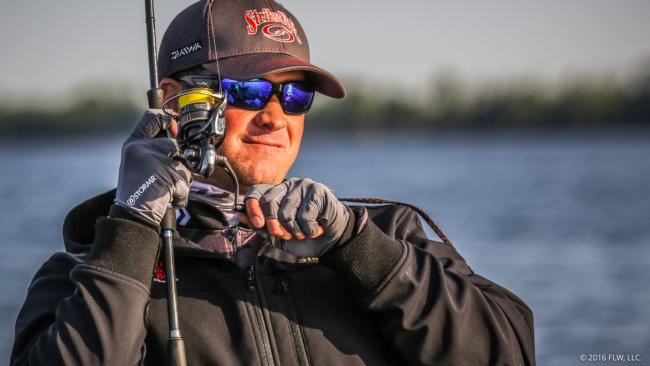 According to Meyer, there is no wrong time to use the Neko Rig.

“It works year round to be honest, but it really excels when the fishing is tough and you can’t seem to get bit on anything else,” Meyer says.

Water clarity and structure are deciding factors for Meyer as to when he picks it up.

“It works great in clear water and stained water, but when the water is muddy there are better ways to catch them. I mostly use it in open water because it is much easier to fish with an exposed hook.” 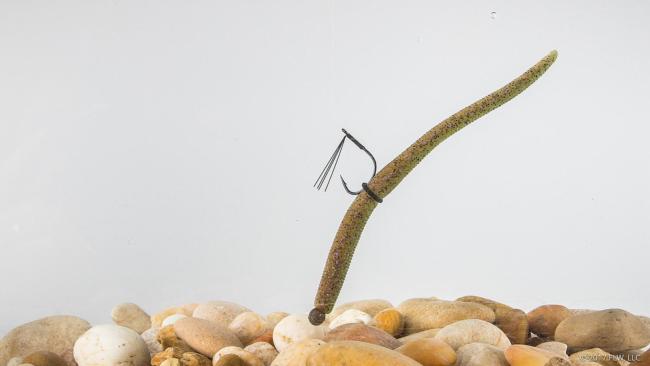 How to fish it

FLW Tour pro Charlie Evans uses the technique often and says that the vast majority of his bites occur during the initial fall.

“I will pitch it around docks, riprap, and brush and let it fall to the bottom and watch my line for a bite,” Evans says. “Once on the bottom, the worm will stand straight up and they will often swim over and get it while it is sitting still.”

Evans prefers to let it fall to the bottom, then pause, give it a shake and then another short pause before reeling it back to repeat the process.

Noted finesse expert Cody Meyer agrees that many bites will happen as the rig makes its initial descent, but he often works his bait more on each cast.

“I will cast it out and let it fall all the way to the bottom and then keep it there,” Meyer adds. “I’ll make short hops with it, but maintaining bottom contact is the key.” 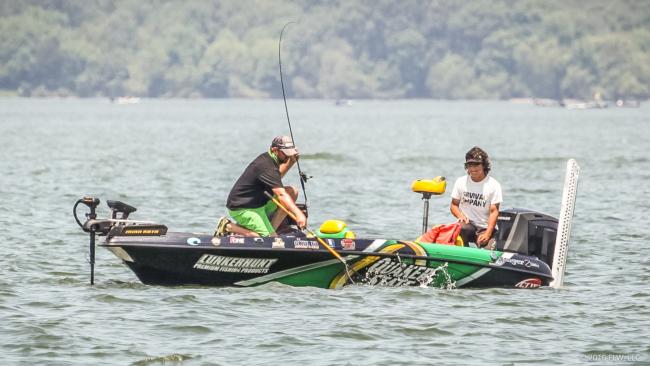 FLW Tour pro Matt Arey uses the Neko Rig when a school of fish has stopped biting. He will cast or drop his bait down, let it fall to the bottom and then fish it with steady rod movement while staying in contact with the bottom.

“I’ll let it get down and then begin to move it with a constant shake. It is a great mop-up technique when they get fickle and stop biting bigger lures,” Arey says. 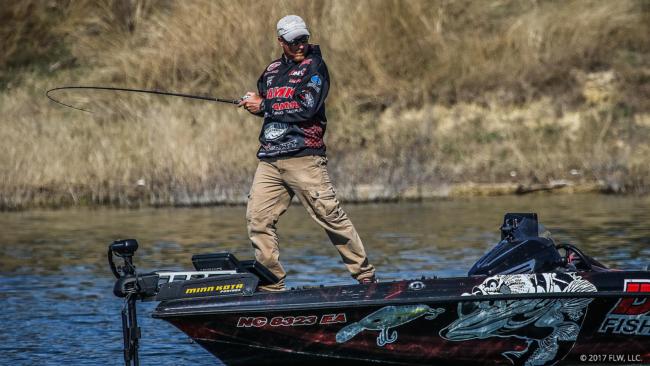 Reigning FLW Tour Angler of the Year Bryan Thrift will use a standard finesse version of the rig with spinning tackle, but also uses baitcasting gear when fishing an upsized Neko Rig. He’ll rig an 11-inch Damiki Mega Miki worm with a 3/8-ounce Neko weight.

“I’ll fish it with a tight line and drag it along the bottom,” says Thrift. “It is important to keep the line tight so you can keep contact with the bottom and it allows the worm to stand up vertically. That’s the great thing about this technique, it will stand any worm up straight.”

Thrift agrees with Meyer and Evans in saying that there is no wrong time to Neko.

“I have used it in dirt-shallow water and all the way down to 35 feet of water.” 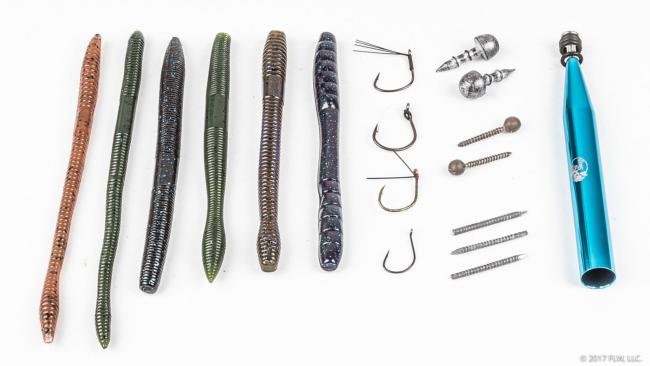 The popularity of the technique has spawned a host of terminal tackle products designed just for the technique. Some anglers prefer tungsten nail weights for their compact size and ease to insert in finesse plastics, while others prefer specifically designed lead Neko weights that have ribs along the side to stay secure to plastics – though honestly there really is no right or wrong weight to use. Weight size preference varies and depends on the depth, so it’s a good idea to have a few of each.

While technique specific weights work wonders, Evans likes to think outside the box for his weights.

“Instead of buying the Neko weights, I use 1 ¼-inch drywall screws for the weight and a No. 5 split ring to hold the hook to a Zoom Trick Worm,” Evans says.

Evans’ one modification to the screw is to cut off the head of it so he can fully insert the weight in the worm. He prefers the screw over traditional weights because he says the pointed end of the screw allows it to easily insert into the bait and the grooves along the screw keep it from coming out.

When it comes to hooks, options vary from those that were specially designed for the technique with a straight shank to standard wacky rig hooks. If you want to fish the rig weedless or more snag-proof then a straight shank hook can essentially be Texas rigged in the middle of the worm, while a wacky hook is great pick for open water. 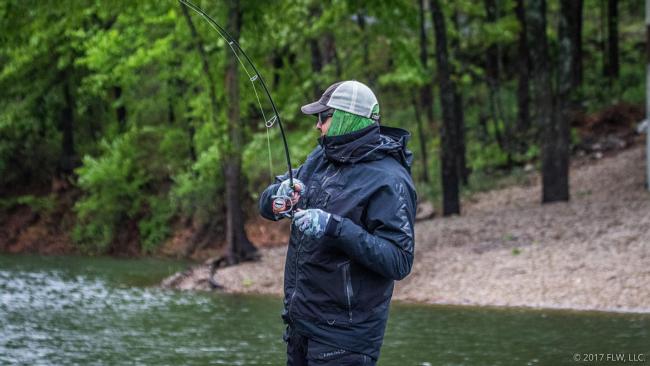 Each pro has their preferences on brands for rods, reels, and line, but the general agreement is the use of spinning gear and light line is necessary. A typical outfit used for a drop-shot with a braided mainline and a fluorocarbon leader will do, but Arey opts for a slightly heavier rod.

“Setting the hook is really just a matter of using a reel set, but you want a rod with a little more backbone when fishing it in deeper water,” Arey believes.

The pros also offered a handful of go-to Neko baits, though none of them were mentioned twice. The common denominator among baits was to use a worm with a straight tail. This allows for them to stand vertically and get the best action from the rig.

The Neko Rig is a versatile technique that works in many different situations. When fished slowly near the bottom, it outperforms just about any other technique when the fishing is tough. So, next time the fishing slows down a little, bust out the Neko Rig and see for yourself what all the buzz is about.