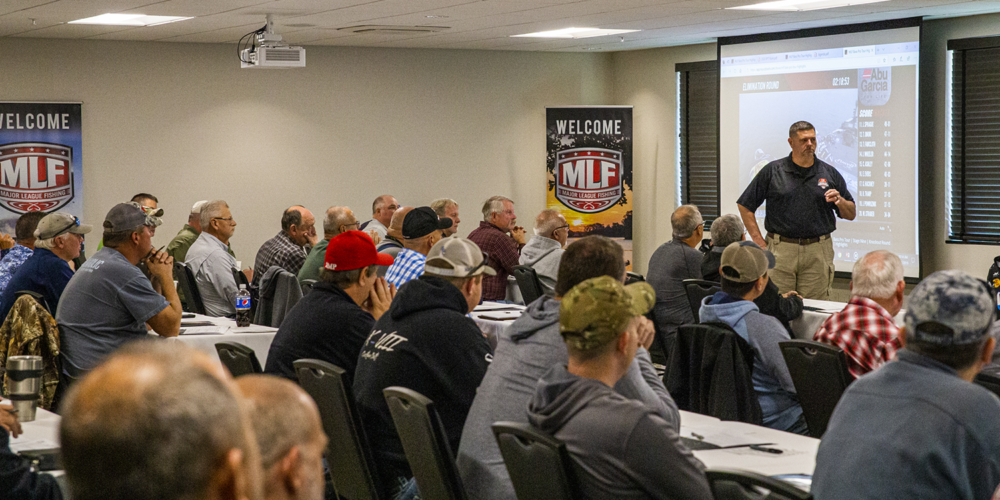 “I need you to understand the professionalism we require of our officials,” Beshears said in a stern voice.

Nothing but the Best

The job of an official or referee in any sport is not an easy one, and Beshears is well aware of that fact. He’s quick to admit that he and his staff demand excellence on the water from their officials.

“MLF is a highly professional organization and we demand professionalism out of our officials every time they’re out on the water,” Beshears explained. “At the end of the day, a penalty that an official calls or doesn’t call has a direct impact on whether or not a professional angler can put food on his table. The decisions our officials make can affect these pros’ career and income. That’s a tremendous responsibility and we don’t take it lightly.”

Over the weekend, the 51 candidates went through different workshops, lectures and instruction sessions on everything it takes to become an MLF official. The hopeful officials learned about angler/official etiquette from Bass Pro Tour 2019 Points Champion and REDCREST winner Edwin Evers. They received instruction on professionalism, and how to enter scores into SCORETRACKER®, and uniformity on penalty assessment. They learned about etiquette when transferring MLF cameras from boat to boat from MLF pro James Elam.

However, Beshears says the hardest thing to teach the candidates to not do is the reason many of them are here in the first place.

“It’s hard to get these officials out of the mindset of being a fan,” Beshears said. “We all wouldn’t be here if we weren’t fans of these anglers and fans of the product that MLF has put together. I’m sure NFL referees are fans of the NFL, but they don’t appear to be when they’re working on the field. It’s all about separating your fandom from your professionalism. That’s sometimes easier said than done for some of these guys.”

Coming to a Boat Near You

One of those fans turned MLF official hopeful is Vanetta Groeteke from Table Rock Lake, Missouri. As a recently retired teacher, Groeteke was looking for her next activity in life. Living near the site of Stage Six and Seven of the 2019 Bass Pro Tour, Groeteke saw the excitement of MLF firsthand this summer. After watching all of the past episodes on the Outdoor Channel and hearing MLF was looking for more officials, Groeteke couldn’t pass up the opportunity.

“I’m really here to learn and to be a part of this great format,” Groeteke said. “I’ve watched MLF on television for years, so I know what is expected out of the officials. This isn’t intimidating to me because I know how to be in charge and enforce rules from my days teaching.”

According to Beshears, Groeteke passed with flying colors and will be one of the first female officials in MLF history. Out of 51 candidates, 37 passed the rigorous training and testing to earn a spot as an MLF official for the 2020 Bass Pro Tour season.

As he and his new officials move forward, Beshears wants his team to improve on one key aspect for next season.

“I want our officials to be more consistent,” Beshears simply stated. “If we have 100 officials, I want all 100 to call the game the same way. There’s going to be human error and judgement calls and we understand that, but we want to be as consistent as we possibly can and I think we have the right group to do it.”