Vezina Trophy finalist may have future in fishing after hockey 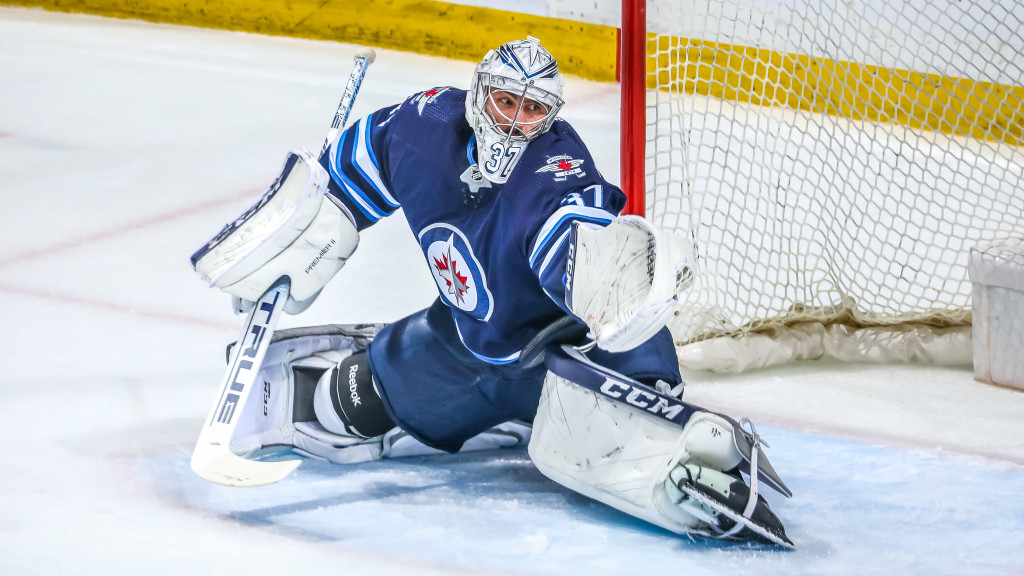 Before the 2019-20 NHL season shut down due to the COVID-19 pandemic, Winnipeg Jets goalie Connor Hellebuyck was putting together one of his best seasons as a professional, perhaps only second to 2017-18 when he finished runner-up in Vezina Trophy voting. The 26-year-old is a finalist to win hockey’s top goaltender award this season, too, but that’s not all he has on his mind. In fact, since he’s had some extra time on his hands recently, it’s been fishing that’s kept Hellebuyck busy.

The Michigan native, who now spends plenty of time on the ice in Winnipeg – both playing hockey and chasing after walleyes – grew up fishing, and bass fishing has become one of his favorite fair-weather hobbies. We got a chance to chat with Hellebuyck about his background in fishing, his future on the water and his present on the ice.

I guess the best place to start is the beginning. You grew up in Michigan, and there’s some pretty good bass fishing up there during the warmer months when everything isn’t iced over. Did you grow up bass fishing?

I did, slightly. My grandpa would take us up north, and when I say up north, I mean anywhere middle of Michigan and north of that. We’d sit on a boat, and we’d drop down worms. That was my introduction to fishing. There are so many lakes around here, and we had lake access that we’d go down to the docks and just walk the docks throwing out lines and catching bass, and I think that’s where my bass fishing began.

You’ve mentioned growing up playing a lot of pond hockey, which is obviously a pretty common thing up north during the winter months. Were those some of the same ponds you fished when the ice melted off and you could actually get a lure in the water?

It was almost two completely different seasons for me. One, I didn’t even think about fishing or grabbing a pole; I was just getting out on the ice having fun playing hockey. The other one was if I woke up early, I’d take a pole and go straight down to the water. It’s almost like I’ve lived my entire life out there.

You’ve gotten into ice fishing recently. What’s the story there?

There’s always that void of winter months and not being able to fish and always thinking about it and talking about it. (Former Jets teammate) Dustin Byfuglien started getting into ice fishing, and he was trying to get me into it and was telling me how awesome it is and how good Lake Winnipeg is. So, finally, I decided to go with him, and when I went with him, I enjoyed myself a ton. We caught some really big walleye – I think I caught a 29-incher that day – and from there I was hooked.

Have you been able to get out ice fishing at all since the season shut down and you’ve had some time on your hands?

When the season first ended and we weren’t necessarily quarantined yet, I was able to get out quite a bit, and I had some really good days out there on Lake Winnipeg. But then, once we got released home, I went home and there was no ice on the water, so it was back to bass fishing.

You mentioned recently that you’ve spent some time on YouTube watching FLW videos. Is that something you’ve always been into, or did you get into watching tournament fishing content more recently?

I’ve definitely gotten into that more recently because my brother (Chris) is quarantined with us and was putting on some of those episodes, and they were just so fun to watch, and it gave you that itch to go fishing. With all this extra time on our hands right now, I started watching a little more and a little more, and he would have them on and I’d go watch whatever he’s watching, and now I find myself looking up the videos and watching them myself.

What’s your favorite stuff to watch? FLW Live tournament shows? Tips and tricks? What are you getting into the most?

The live tournament highlights. I’ve been going back to the 2016 season now because I’ve been kind of running out. I watch all the highlights and how you guys break them down; they’re like 45-minute episodes.

Do you have any favorite FLW anglers? We’ve got some hammers on the Pro Circuit who hail from your general neck of the woods. Is there any one angler you really like?

I haven’t come up with one person because there are so many good ones, but there’s none I don’t like. I like seeing guys catching big fish.

Once you’re done with hockey somewhere down the line – hopefully after your mantle is packed with accolades – do you think fishing is going to be something you do a lot more of?

St. Clair. Absolutely St. Clair. You can catch so many big smallmouth. You get on the right spot and it’s just one after the other.

Do you have a bucket list lake you want to fish or maybe a fish you just really want to catch?

Kind of. You hear so many things about Okeechobee, even though I don’t know if it’s as healthy as it has been in recent years. Okeechobee would definitely be one of those lakes that I’d love to try.

Have you gotten your girlfriend to go fishing with you?

Once in a while. She likes to go out and tan when it’s nice and hot.

People who play sports in any capacity have to have a competitiveness about them, and I’m sure it’s that much more apparent with pro athletes. How competitive are you when it comes to fishing?

I think it’s almost a different sport when you get into competitive fishing. The adrenaline you get – every fish feels like 10 – it’s so much more intense, and it’s a void you can’t really fill with anything else.

I want to know about your masks. You always have some kind of fishing theme going with those. How did that start?

When I first started actually designing masks, I wanted to keep a theme that I’d do every year, and I came up with the fish. I have a phenomenal painter, and when he finished the first product, I just loved the outcome of it, and I just knew it was only going to get better from there. So, I thought he did such a good job on those fish that I wanted to continue changing the species depending on the summer I was having; what kind of fish I was targeting. I was just going to continue throwing new ideas in there. Now I’m to the point where I’m just throwing every fish type there is in there because I just enjoy having that on my mask. It’s a good story teller into my personal life.

What’s the next fishing-related thing you want to put on your mask?

That’s still to be determined. We’ll see. I’ve still got some time. I like to fish a little bit before I come up with a species I want to throw on it.