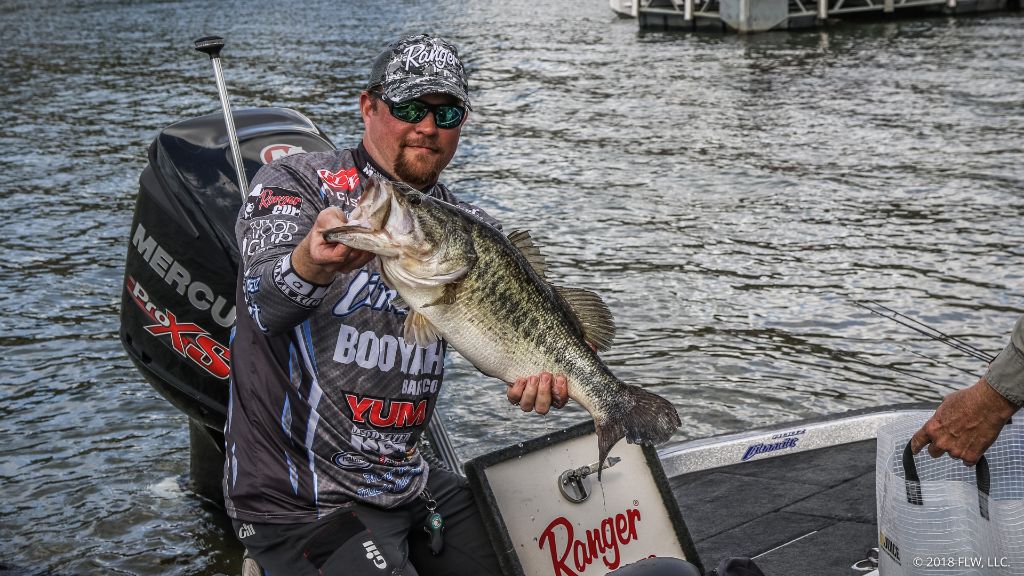 As the world prepares to flip the calendar page from February to March this week, FLW anglers from Georgia to Tennessee to Texas are preparing for a big week in bass fishing, as the Costa FLW Series Southeastern Division continues its season on Lake Seminole, four T-H Marine FLW Bass Fishing League divisions are in action, and future stars compete in YETI FLW College Fishing and Bass Pro Shops High School Fishing Open events.

Here’s the rundown of what’s on tap for the first weekend in March.

In 2017, Buddy Gross weighed in more than 64 pounds in three days to win the Costa FLW Series event on Lake Seminole in the first week of March. Gross targeted staging fish in deep grassy drains using a swimbait for his win, while the rest of the top 10 pros sight-fished and worked primarily shallow staging areas near spawning flats.

This season’s event, which is presented by T-H Marine and hosted by the Bainbridge Convention and Visitors Bureau, could follow a similar track. Reports are that fish were already starting to spawn a couple weeks ago, and last week likely saw more fish move in thanks to highs in the 80s and sunshine. Despite a forecast for a brief cool-down early in the week, it appears plenty of nice weather is in store, which should make for good fishing conditions to warrant a mix of prespawn and spawn patterns.

This tournament is the second of the season in the Southeastern Division and includes a full field of 200 boats. Pros are competing for a top award of up to $93,000, including a brand new Ranger Z518C boat with a 200-hp Evinrude outboard.

Anglers will take off from the Bainbridge Earle May Boat Basin, located at 100 Boat Basin Circle, in Bainbridge, Ga., at 7 a.m. ET each day of competition. Weigh-ins will be held at the Boat Basin on Thursday and Friday beginning at 3 p.m. Saturday’s final weigh-in will be held at the Bass Pro Shops in Tallahassee, Fla., located at 4059 Lagniappe Way, and will begin at 4 p.m. Takeoffs and weigh-ins are free and open to the public.

Fans can follow weigh-ins remotely via FLW Live at FLWFishing.com all three days.

Due to a tournament cancellation, the Cowboy Division will host a special double-header event on Sam Rayburn March 3-4. The originally scheduled March 3 event will take place unchanged on Saturday, while a second makeup event will be held on Sunday, March 4.

As the Costa FLW Series Southwestern Division event in mid-February demonstrated, Sam Rayburn is poised to turn out some giant bags this spring. That tournament produced one limit that went over 31 pounds and 11 others over 20 in just two days of fishing (the final day was canceled due to heavy fog). A 10-pound-plus bass was the biggest of day two.

Heavy rains that fell throughout last week will be the biggest factor in the tournament, as anglers look to cash in during a long weekend of tournament fishing.

It took a tad over 20 pounds to win a March 2017 BFL event on Dale Hollow, and although this year’s tournament is a week earlier in the year, anglers can probably expect a similar benchmark when the Mountain Division kicks off its season on the famed reservoir.

Last season, winner Robert Reagan targeted areas with stained water. There could be plenty of stain to go around this time following several rainy days in the region last week. Jigs, jerkbaits, crankbaits and spinnerbaits – all classic prespawn tackle – will be in play for both largemouths and smallmouths on what has been one of central Tennessee’s hottest bass lakes in recent years.

The Piedmont Division also kicks off on Saturday at Kerr Lake. The previous three openers were held at Kerr, but never this early in March. Those events saw leading stringers in the upper teens to low 20s. Whether or not anglers can repeat such results this time around probably depends on how prespawn fish react to a predicted cool-down – albeit a mild one – that is supposed to arrive this week.

The second stop of the season for the Savannah River Division will be at Clarks Hill where, in 2017, Brock Taylor earned the win in a late February event with an impressive 22 pounds, 10 ounces. Two other anglers topped 20 pounds. The previous year, also in late February, the top six all broke 20 pounds, and Charles Story banged out 25-4 for the win.

Obviously, this is a solid time of year to chase big stringers at the Georgia-South Carolina border reservoir, and big catches are likely on tap again this week.

According to social media reports and the Tennessee River Valley’s fishing grapevine, Guntersville is going off right now, and anglers are catching not only great numbers of bass, but big ones. March is prime time to hammer on five good fish, and YETI FLW College Fishing’s best in the Southeastern Division will likely need to shoot for a mid-20-pound bag to win this derby. That’s a bit more than what it took to win there last season in late February, but reports say the water temperature is up and the fish are feeding shallow. It should be a hawgfest.

Expect prespawn action to be good with crankbaits, lipless baits and other power-fishing lures.

Tournament No. 2 in the Bass Pro Shops High School Fishing Open series lands on the Columbus Pool in Mississippi. Typical weights in BFL events there run in the low to mid-teens. Jigs and other bottom baits, along with various power-fishing moving baits, are commonly used there in the early season.