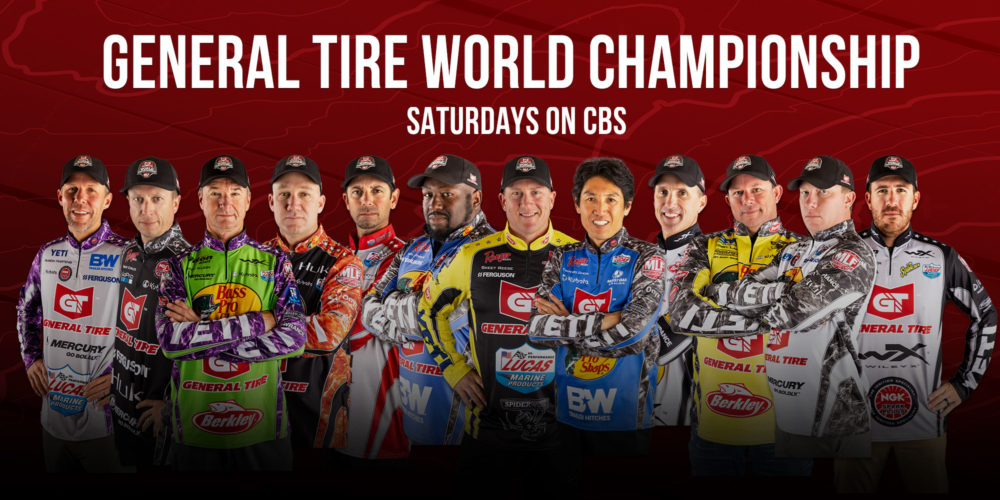 VIDALIA, La. – In the five-decade history of professional bass fishing, there have been only two General Tire World Champions. Starting this week in Vidalia, Louisiana – on the backwaters and oxbows of the lower Mississippi River Valley – Major League Fishing begins the competition to crown the third.

The first Shotgun Round of the 2019 Major League Fishing General Tire World Championship presented by Bass Pro Shops will premiere Saturday, June 22 on the CBS Television Network (2 to 3 p.m. ET), the third year that the quest for the Johnny Morris Award will be broadcast on major network television. And for the third straight year, it’s a lineup of heavy-hitters: multi-time tour-level Angler of the Year winners, multiple Bassmaster Classic and Forrest Wood Cup champions, multi-million-dollar money earners, and one angler (Bobby Lane) looking to become a repeat World Champion.

The 12 anglers fishing the General Tire World Championship arrived in Vidalia – a historical town of 4,800 nestled on the west bank of the Mississippi 91 miles north of Baton Rouge – after two years of competition to accumulate points from the 2018 and 2019 Summit and Challenge Cup events.

This World Championship will bring several anglers back to familiar waters: seven of the 12 competitors made it to the Championship Round of the 2018 Challenge Cup, which was co-hosted by Vidalia.

Lane was the winner of the inaugural General Tire World Championship in 2017, and the former holder of the record for the biggest bass caught in MLF competition (an 8-pound, 5-ounce largemouth caught in 2015).

Omori is the only Japanese angler to win the Bassmaster Classic, and one of a handful of pros who have banked more than $2.7 million in tournament winnings.

Currently ranked No. 1 in the Bassfan World Rankings and one of the Top 5 money-earners of all time, Evers is a killer in the MLF catch/weigh/immediate-release format: He won the second-ever event in MLF Bass Pro Tour history (on Lake Conroe, Texas), and already owns three MLF Cup trophies.

A first-time competitor in the General Tire World Championship, Chapman was the 2012 Bassmaster Elite Series Angler of the Year.

The Northern California native can claim one of the most successful career resumes in the history of the sport: He’s won a Bassmaster Classic and an Elite Series Angler of the Year award, and has banked upwards of $3.8 million in tournament winnings.

Ehrler was the very first champion in Major League Fishing history, winning the inaugural MLF event on Lake Amistad, Texas in 2012. He was one of the most successful anglers in the history of the FLW Tour (over $2.2 million) and is presently ranked No. 7 in the Bassfan World Rankings.

Monroe has banked over $2.3 million in his professional career, including nine tour-level wins and over 50 Top 10s.

In addition to career tournament earnings over $3.1 million, Iaconelli is the only angler in history to win the Bassmaster Classic, Bassmaster Elite Series Angler of the Year and the B.A.S.S. Federation Championship.

Wheeler is the most successful competitor by round in the MLF catch/weigh/immediate-release format, claiming the highest percentage of round wins in MLF history. He was the youngest winner of the Forrest Wood Cup (21 years old when he won in 2011), and is fresh off a win at the Bass Pro Tour Stage Seven Table Rock. Wheeler is ranked No. 4 in the Bassfan World Rankings.

A 2018 inductee into the Bass Fishing Hall of Fame and one of the creators of Major League Fishing, Klein is a two-time Bassmaster Angler of the Year, and has competed in over 500 tour-level events in his four-decade career.

The South Carolina pro proved to be a wunderkind at the MLF format, earning enough points to compete in a World Championship after only one season of competition. Montgomery has earned over $1.2 million in winnings.

The 2019 Major League Fishing General Tire World Championship Presented by Bass Pro Shops airs every Saturday for six weeks (starting June 22) at 2 p.m. ET. Each episode of the General Tire World Championship will be rebroadcast on CBS Sports Network every Saturday at 1 p.m., starting June 29. Check your local listings and with your local CBS affiliate.