Virginia Pro the First to Qualifying Weight, Joined by Evers, Ashley, Omori, Meyer and Lee in Championship Round 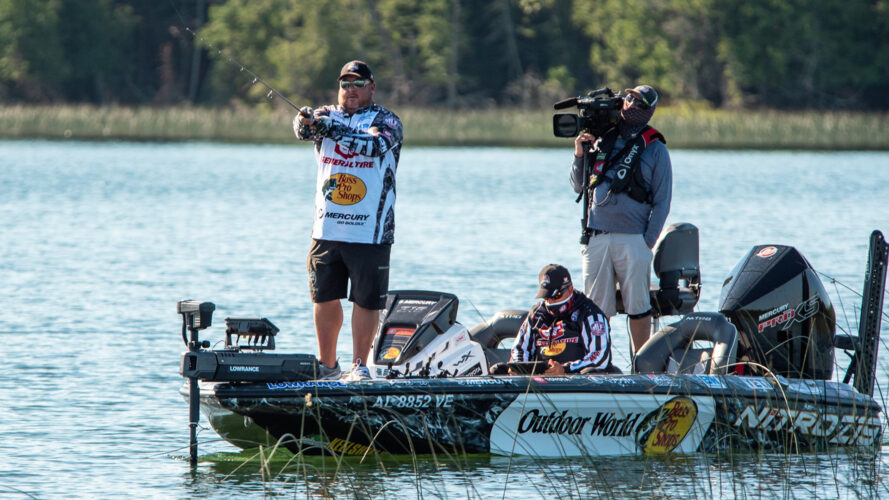 MLF pro Jacob Powroznik caught a 1-pound, 6-ounce smallmouth bass at 11:20 a.m. – his ninth smallmouth of the day – to cross the 20-pound qualifying weight threshold on Turtle Lake and become the first angler to advance to the final day Championship Round at the General Tire World Championship Presented by Bass Pro Shops in Grand Rapids, Minnesota.

Joining Powroznik will be the 2019 Bass Pro Tour Angler of the Year (AOY) and REDCREST champion Edwin Evers, Casey Ashley, Takahiro Omori, Cody Meyer and 2020 Angler of the Year Jordan Lee. The final day Championship Round episode premieres this Saturday, November 14, from 7 to 9 a.m. EST, on Discovery.

“During the ride around, I was looking and I found one kind of high shoal out in the middle of the lake that had three buoys on it that said ‘ROCK,’” Powroznik said in his postgame press conference. “I know that smallmouth love rock, so I kind of idled around it and I marked a couple of fish on my side scan. I thought it looked good, so I figured I’d fish around it and see if I could figure out what was going on. I ended up catching one on my very first cast, and it was on.

“I threw a little drop-shot worm, in smoke and green-pumpkin, but it really didn’t matter the color,” Powroznik continued. “The smallmouth were very active and if you put any bait in front of them they were going to bite it.”

Despite his fast start and finishing before noon, Powroznik said that he still felt the pressure of the Sudden Death Round.

“The first one and the last one are always the hardest fish to catch in Sudden Death,” Powroznik said. “I had 19-2 or something like that for a while, and I’m just thinking, ‘Come on… one more bite. And don’t lose it…’ It’s the highest of highs at that moment, but the stress level right then is out of this world. Your heart is racing, you’re breathing heavy. Everything is weighing on your shoulders to try to catch one more fish. I was nervous, but I had a pretty good lead so I wasn’t freaking out too bad.”

With just one round to go before the champion is crowned, Powroznik is now ready for his opportunity to take home the Johnny Morris award trophy and the top prize of $100,000.

“It would be unbelievable to win – I’d love to take that trophy back home with me to Virginia,” Powroznik went on to say. “It would make my 22-hour drive back to Prince George so much better.”

The first six anglers that reached the 20-pound qualifying weight on Turtle Lake and now advance to the Championship Round finale on Spider Lake are:

Lee caught the Berkley Big Bass of the day – a 4-3 smallmouth that came offshore on a worm.

Overall, there were 84 bass weighing 158-4 caught by the eight pros during the Sudden Death Round of competition on Turtle Lake.

During the Sudden Death round, the eight anglers that advanced from the Shotgun and Elimination Rounds competed to become one of the first six to reach a qualifying weight – determined by MLF officials. Now the top six anglers advance to the final day Championship Round – where weights are zeroed and the highest total weight at the end of competition wins and will be declared World Champion.

Next week’s finale episode of the General Tire World Championship Ppresented by Bass Pro Shops will feature the final six anglers competing in the Championship Round on Spider Lake in Grand Rapids, Minnesota.

The General Tire World Championship presented by Bass Pro Shops, hosted by Visit Grand Rapids, airs on the Discovery Channel as six, two-hour original episodes each Saturday morning running through Nov. 14, airing from 7 to 9 a.m. EDT. The full television schedule can be found at MajorLeagueFishing.com/tv-schedule.