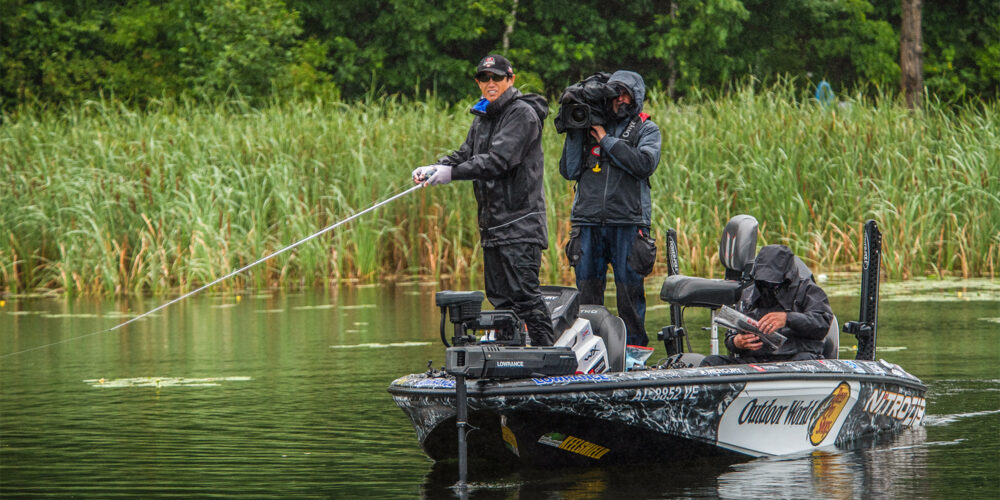 Takahiro Omori of Tokyo, Japan, caught 55 largemouth totaling 84 pounds, 3 ounces, on Pokegama Lake to win Elimination Round 1 at the General Tire World Championship Presented by Bass Pro Shops in Grand Rapids, Minnesota. Omori’s two-day cumulative total of 63 bass for 98-7 advanced the Japanese pro to the Sudden Death Round of competition in the six-day championship tournament, airing on Discovery, that showcases 16 of the best bass anglers from around the world competing for a top prize of $100,000.

Andy Montgomery was the first angler to advance into the Sudden Death Round after his victory in Shotgun Round 1. He is now joined by Omori, along with pros Jordan Lee (57 bass, 96-3) and Casey Ashley (51 bass, 88-13) as the four anglers advancing from Group 1. The Sudden Death Round episode is set to premiere in two weeks on November 7.

“In the morning we had a lot of wind and rain, and it was cold. I really didn’t expect the fish to bite that good,” said Omori, who has career earnings of more than $2.7 million. “I went to my first spot and they started biting, right away. I caught something like 47 pounds in the first period – the most fish I’ve ever caught in a single period.

“After my first day, I was way down in the standings. But, after that first period, I realized I had a good chance to make it in to the top three,” Omori continued. “So, I stayed in that one general area – in the back end of a creek – for all three periods.”

Omori said that his key bait throughout the day was a  Z-Man Evergreen ChatterBait Jack Hammer, with a Z-Man RaZor ShadZ trailer (green-pumpkin), estimating that 90 percent of his fish came on that.

“The lake we were on today, Lake Pokegama, was amazing,” Omori said. “The lake and the conditions fit my fishing style really good, so I was really happy that they chose this lake.”

Looking ahead to the Sudden Death Round, Omori said that he will be ready to go, no matter what fishery tournament officials select as competition waters.

“I just focus on my fishing,” Omori said. “Usually, I’m a largemouth guy. I’m not saying that I hate smallmouth, but I definitely prefer to target largemouth. So, hopefully for the Sudden Death, we fish a lake with a bunch of largemouth. I’ll have both setups rigged up, and do whatever it takes.”

The four anglers advancing to the Sudden Death Round are:

Martens caught the Berkley Big Bass of the day – a 4-7 smallmouth that came offshore on a crankbait.

Overall, there were 221 bass weighing 368-5 caught by the seven pros during Elimination Round 1 on Pokegama Lake.

The General Tire World Championship, hosted by Visit Grand Rapids, will air on the Discovery Channel as six, two-hour original episodes each Saturday morning debuting on Oct. 10, 2020, and running through Nov. 14, airing from 7 to 9 a.m. EDT. The full television schedule can be found at MajorLeagueFishing.com/tv-schedule.