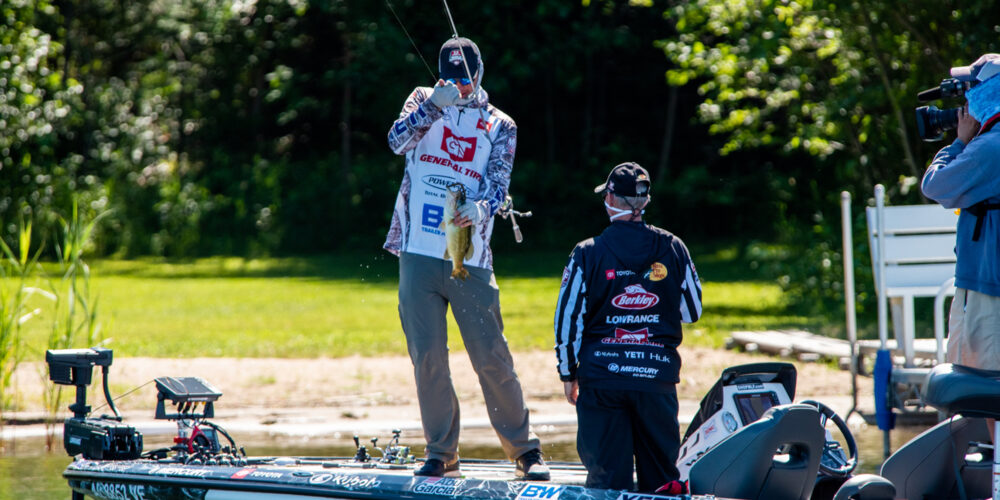 GRAND RAPIDS, Minn.  – MLF pro Cody Meyer of Star, Idaho, had a pretty special day on Pokegama Lake, as TV viewers around the country witnessed when they tuned in to Discovery on Saturday morning.

The Idaho pro caught 68 largemouth bass weighing 123 pounds, 12 ounces to win Shotgun Round 2 at the General Tire World Championship Presented by Bass Pro Shops in Grand Rapids, Minnesota. Meyer now advances directly into the Sudden Death Round in the six-day championship tournament that showcases 16 of the best bass anglers from around the world competing for a top prize of $100,000.

Meyer’s final tally of 68 bass and total weight of 123-12 smashed previous MLF Cup records: it was the most fish caught in a single day of competition, and also the largest single-day weight in MLF Cup history.

In the postgame press conference, Meyer said it was one of the most special days in his career.

“I really wasn’t expecting to have that kind of a day,” Meyer said. “It ended up being one of the best days that I have ever had in my career, and the most fun that I’ve had fishing in a long time. To come out on top, with the anglers that were in this group, is really special. It was such an awesome day – all day long I felt like I could call my shot.”

Meyer found most of his success fishing main-lake docks with every fish he caught coming on a wacky-rigged Yamamoto Senko (green-pumpkin and purple). He fished it on a 7-foot, 4-inch Daiwa Tatula Elite rod paired with a Daiwa Exist reel, using 10-pound braided line with a 10-pound fluorocarbon leader.

“I really thought someone was going to win the day by flipping, but the docks were so loaded with fish. Every single dock had two, three, four, even five fish on them. I caught 68 fish, which was incredible. But, I also lost around a dozen. It was by far the most fish and the most weight I have every caught in any MLF event.

“The key that I figured out was the sand,” Meyer continued. “The docks had to be really shallow, with deep water nearby. The fish got shallower and shallower as the day progressed, and if the docks were on sand there was fish on every single one of them.”

Moving On in Grand Rapids

With his win, Meyer now advances directly into the Sudden Death Round, a day that many anglers call the most stressful day of fishing they experience.

“I’m definitely confident on the fisheries up here in Minnesota, and I’m having a lot of fun,” Meyer said. “But now I need to get ready for Sudden Death, which is 100 percent the most stressful day that you can have in bass fishing. There is never any downtime, and you have to catch them fast. I went through eight or nine bags of baits today, and I’m definitely going to need to find some more before we fish Sudden Death.”

The standings after Saturday’s airing of the Shotgun Round 2 are:

Lintner caught the Berkley Big Bass of the day – a 4-pound, 5-ounce largemouth that bit a jig on the docks.

Overall, there were 404 bass weighing 1,171 pounds, 8 ounces caught by the eight pros on day two of competition on Pokegama Lake.

In MLF General Tire World Championship competition, the full field of 16 pro anglers is split into two groups of eight. The first group competes in a Shotgun Round 1 on day one, the second group on day two for Shotgun Round 2, with the winners of each day advancing directly to the Sudden Death Round. The remaining seven anglers from each group will now carry their total weight on to the Elimination Round. The three anglers from each group’s Elimination Round with the highest cumulative two-day weight will advance to the Sudden Death Round – eight anglers total.

During the Sudden Death Round, the eight anglers that advanced from the Shotgun and Elimination Rounds compete to become one of the first six to reach a qualifying weight – determined by MLF officials. The top six anglers then advance to the final Championship Round, where weights are zeroed and the highest total weight at the end of competition wins and will be declared World Champion.

The General Tire World Championship, hosted by Visit Grand Rapids, will air on the Discovery Channel as six, two-hour original episodes each Saturday morning starting Oct. 10, 2020, and running through Nov. 14, airing from 7 to 9 a.m. EDT. The full television schedule can be found at MajorLeagueFishing.com/tv-schedule.