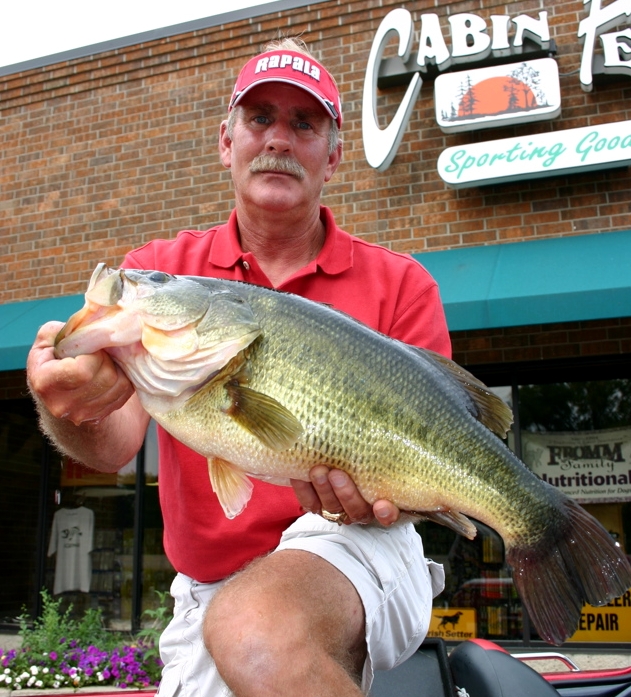 MINNEAPOLIS – Longtime tournament angler Mark Raveling of Spring Park, Minn., broke the Minnesota state record for largemouth bass this week when he caught an 8-pound, 15-ounce fish on a small lake near the Twin Cities. The previous record stood for 11 years.

Raveling – a 54-year-old tournament pro who fished the Wal-Mart FLW Tour in 2000-2001 and has also competed in the Wal-Mart BFL, EverStart Series and Ranger M1 – caught the record largemouth Monday morning on Lake Auburn, a smallish 261-acre lake about 30 miles west of Minneapolis.

Fishing with friend and tournament partner Jay Carlson, Raveling caught the fish on a white-and-chartreuse Blue Fox Double Spin Buzzer topwater bait. Using 40-pound-test Stren line and a medium-action G. Loomis 843 rod, he muscled in the largemouth at about 10:30 a.m.

“We were only on the lake about 10 minutes. It was the first fish of the morning,” Raveling said. “It looked like a muskie hit more than anything, but I was using heavy enough tackle that I was able to power him out of the weeds right to the boat. It wasn’t much of a fight.”

After landing the fish and putting it in the livewell, Raveling continued fishing until Carlson decided to weigh the big bass. When it weighed in at 8 pounds, 15 ounces, they knew Raveling had the record. The previous state-record largemouth – also landed in October – was caught on Tetonka Lake in 1994 and weighed 8 pounds, 12.75 ounces.

Raveling took the fish to a certified bait shop for an official weigh-in and filled out the necessary forms, with witness verification, for record certification. He also took the fish to Minnesota Department of Natural Resources offices for further verification. Officially, the largemouth weighed 8 pounds, 15 ounces and was 23 1/2 inches long and had a 17 1/2-inch girth. The record is still pending the verification process by the Minnesota DNR, but Raveling predicted it shouldn’t encounter any obstacles.

Thanks to conscientious angling, the record fish is still alive. The fish rested in Raveling’s livewell, which is supported by an Aqua Innovations oxygen aerator, until it was taken to Lindner Media Company headquarters in Baxter, Minn., the next day and placed in a large tank. Raveling and other officials are still trying to decide how best to display the fish.

“This is a big deal. It’s kind of like icing on the cake at the end of a good year for me,” said Raveling, a Ranger Boats pro staffer who won several regional bass tournaments in 2005. “I’m glad that I did it, but I’m especially glad that a tournament fisherman caught it. As far as publicity-wise and being able to document it correctly, it’s better than somebody accidentally catching it while crappie fishing or something and then cutting it up to eat it before anybody gets to see it.”