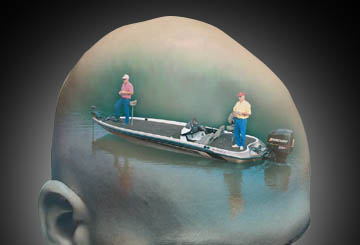 One of the most frequent comments pro fishermen make about individuals trying to break into competitive fishing is this: “They don’t know what they’re getting into.” Most anglers will assume this refers to the numerous practical realities of tournament angling, including coming up with tournament entry fees, obtaining sponsors and financing a boat and equipment, to name just a few.

More often, however, they are alluding to the many intangible issues professional anglers face every day. Take expected level of success, for example. “I see it all the time,” one top angler told me. “A guy has some success in local tournaments, decides to turn pro and expects to continue winning. Well, that’s just not going to happen!”

Statistics confirm this notion. Who is your favorite FLW angler? Is it Larry Nixon or Jay Yelas? Clark Wendlandt or perhaps Luke Clausen? How about Scott Suggs? Let’s take a look at how these well-known anglers have actually done over the course of their FLW careers.

Consider that in 85 events, Larry Nixon has won three times (4 percent) and been in the top 10 a total of 13 times (15 percent). Clark Wendlandt has three wins (3 percent) in 107 events, while Luke Clausen is two for 41 (5 percent). Million-dollar man Scott Suggs has only one win, in addition to the Forrest Wood Cup, in 45 events over the last 12 years of fishing BFL, Stren Series and FLW Tour events. Jay Yelas, the 2007 FLW Tour Angler of the Year, has yet to win a single FLW event in 44 tries. And these are the good guys!

Think of this as baseline data, the information you need to have to realistically assess your own performance. As in any other sport, you need to know what average or above-average performance looks like in order to tell how well you are doing.

In football, for example, a quarterback who regularly completes 70 percent of his passes will be considered successful. By the same token, going to the Super Bowl would be unlikely if your QB’s completion rate was only 50 percent. However, in baseball, base rates are entirely different. If you only get one hit in every three trips to the plate, you’ll end up in the Hall of Fame!

In competitive fishing, you will be considered a top angler if your winning percentage is in the 3- to 6-percent range. You could also expect yourself to be in contention to win another 15 to 20 percent of the time. If your success rate is much greater than that, you might challenge yourself to move to the next level. If your success rate is significantly lower than these numbers, you are perhaps in over your head.

Another important base-rate dimension to understand is the range of success competitive anglers experience from one event to the next. Recently two large tournaments were held on consecutive weeks on reservoirs adjacent to each other on the same river system. According to many anglers, these bodies of water are mirror images of each other. You might think that most anglers who did well in one of these tournaments would do well in both, and if you thought that, you would be wrong.

The top 10 finishers in the first tournament ended up, on average, in 57th place the following week. Remarkably, the top 10 anglers in the second event had an average finish of 56th the week before. Some individual results were even more dramatically disparate. The winner of the first tournament was 85th in the second event, whereas the 98th-place guy in the first contest turned it around and came in second a week later. Perhaps the person who penned the biblical verse “The Last shall be First, and the First shall be Last” was speaking from experience as a tournament angler on the Sea of Galilee!

The key message to the up-and-coming competitive angler is the need to maintain emotional and intellectual equilibrium in spite of wide variations in performance and effectiveness. Tommy Martin, Denny Brauer and others have told me that one of the keys to their longevity in this sport is not getting too high when they do well or too low when they do poorly. This can be an especially challenging assignment for those of us who are highly competitive, energetic and emotionally passionate by nature.

And while maintaining intensity and focus on tournament days is rarely a problem for any of us, pros consistently criticize new competitors for being lackadaisical about how they practice. Without exception, top pros create and use detailed, thorough practice plans. They typically do a great deal of map study before and during practice, and they are on the water from daylight till dark during official practice days.

Getting out late, coming in early, and/or being unfocused and laid back while randomly running around the lake are rookie behaviors that will keep you at the bottom of the leaderboard. As one pro said, “If you don’t love 10- to 12-hour practice days, you will have trouble beating me.”

So be realistic and also resilient about this tournament, and at the same time, wholeheartedly commit to practicing intensely for the next event.

Jay T. McNamara, Ph.D., L.P., also known as Dr. Fish, recently finished his book “The Psychology of Exceptional Fishing.” You can order it by contacting Jay via e-mail at this address: [email protected].

Jay T. McNamara, Ph.D., L.P., is a psychologist, who is also an avid bass and walleye angler. With more than 26 years of professional experience complemented by participation in competitive fishing at local and national levels, he is uniquely qualified to illustrate how performance psychology principles apply to tournament fishing.