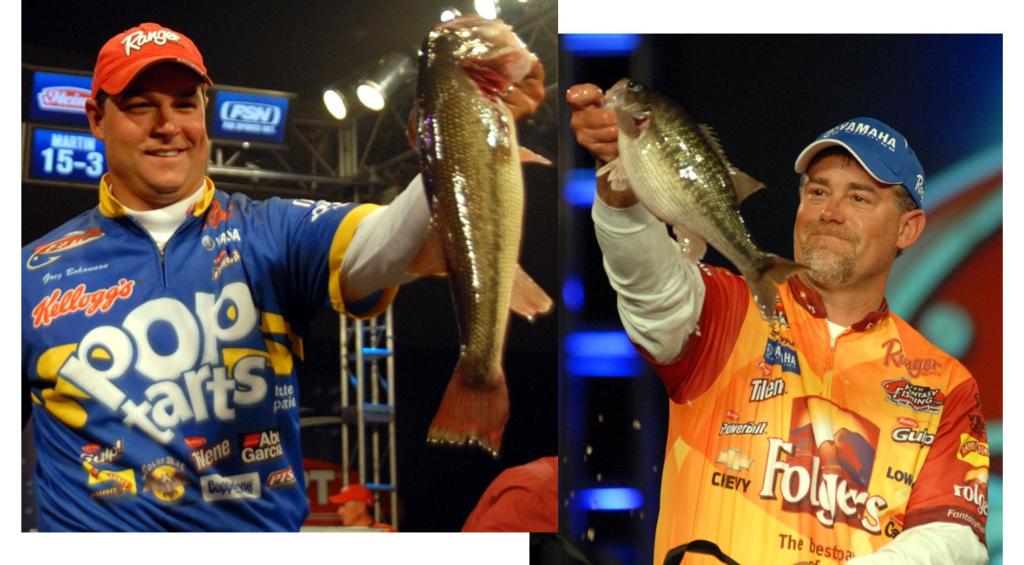 Sponsor-team competition on the Walmart FLW Tour went back to the old school at Table Rock Lake, with top teams resurfacing as heads of the class after a hiatus of two to three years. Team Kellogg’s proved it can compete in the here and now, posting a five-point win in Division I. And Folgers made it clear it will be a team to be reckoned with in Division II, winning the event by 27 points.

As a tournament organization, FLW Outdoors has visited Table Rock Lake in Missouri before, but it was a new destination for the Tour. And while pros and co-anglers alike made hay during the March 12-15 tournament on this bountiful bass fishery, leading the charge with power-fishing gear firmly in hand were the pros wearing the colors of Kellogg’s and Folgers.

After weathering a dry spell, Kellogg’s – a past seasonal champion among sponsor teams – is clearly back to its winning ways, using a Table Rock victory to climb to a strong second in the overall Division I standings. And while Folgers is no stranger to winning, it is new to Division II – though any readjustment period to the new surroundings seems to have been short-lived as the team now sits atop its leaderboard.

Like in years past, sponsor teams are divided into two divisions: Division I, comprising teams of three or more professional anglers, and Division II, comprising teams of fewer than three pros. Keep tabs on your favorite teams’ progress as they compete next week, April 23-26, at the National Guard Open, the third FLW Tour stop of 2009, being held on Lake Norman in Charlotte, N.C.

Look for results from Lake Norman by early May. Results from Table Rock Lake, as well as an explanation of team scoring, are detailed below:

Team Kellogg’s returned to form at Table Rock with an excellent 168.4-point effort, but had to defend the event win from a powerful Team Chevy, which crossed the finish line just less than five points behind as the runner-up. Kellogg’s and Chevy were well ahead of the rest of the pack, and they now sit in second and third place, respectively, in the Division I standings.

Pro Greg Bohannan of Rogers, Ark., picked up the lion’s share of the groceries for Kellogg’s, earning eighth place and his second FLW Tour top-10 in as many years in the circuit. And then there was the Texas two-step for Kellogg’s: The reliably talented veteran Clark Wendlandt of Leander contributed significantly to the cause, posting a 20th-place finish; and Longview’s Jim Tutt put up valuable points for the team, holding down 26th place.

Chevy’s horsepower was provided mainly by three of its pros, who all notched outstanding finishes. You simply can’t contribute more than a win, and that’s precisely what new team member Anthony Gagliardi of Prosperity, S.C., offered at Table Rock while wearing the Chevy jersey, picking up the third of his career on Tour. Chevy ace Luke Clausen of Mount Juliet, Tenn., just missed the cut, but posted great numbers for the team with an 11th-place finish. Not far behind was team stalwart Dion Hibdon of Stover, Mo., who finished 16th.

Team Folgers woke up Division II with its commanding 199-point win at Table Rock, which blasted it up the standings an amazing four places – all the way to the top of the heap. And while second-place Team Febreeze couldn’t match Folgers’ fervor, its impressive 172-point finish got it back on track and leveraged an astounding five-place climb from the depths of the Division II standings to fifth overall.

Past Forrest Wood Cup champ Scott Suggs of Bryant, Ark., was the dominant Folgers flavor, securing second place at Table Rock Lake. The incredible finish also marked the bass pro’s fourth top-10 finish on Tour. Another past king of the Forrest Wood Cup, Lincoln, California’s Michael Bennett blew past a vast majority of the field to put Febreeze on the map with the strength of a sixth-place finish, his sixth Tour top-10 to date.

Sponsor teams competed in the most recent FLW Tour tournament at Table Rock Lake near Branson, Mo., and results from that event have been tallied: