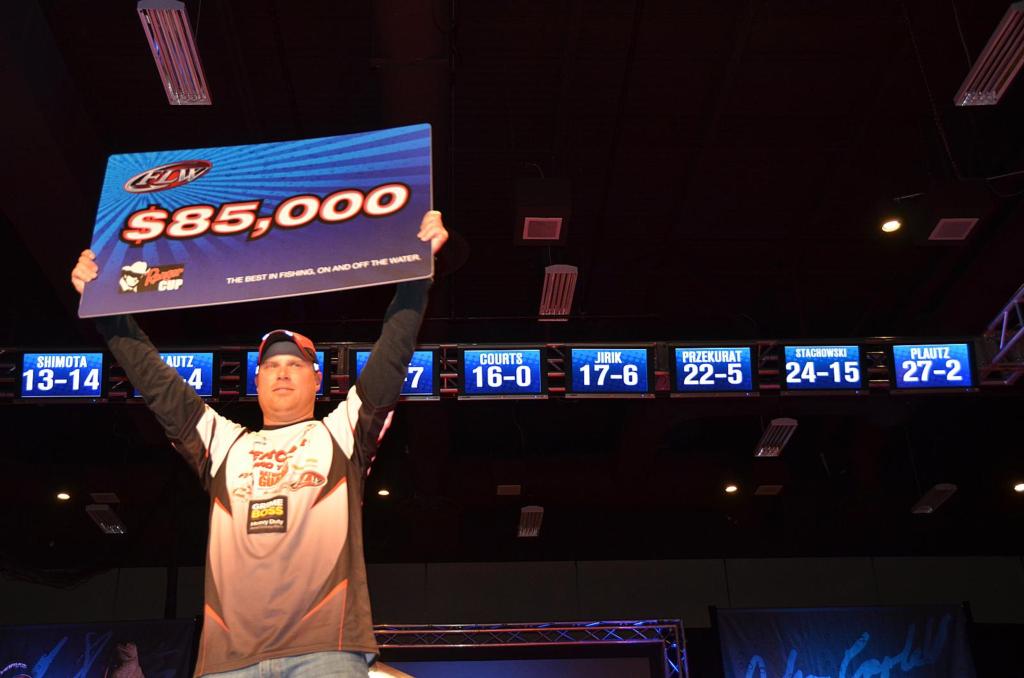 DAVENPORT, Iowa – You couldn’t have written a better script to end the National Guard FLW Walleye Tour season and the final day of competition in the championship. For in the end, it was the man who took the lead on day one of the event and stuck with his gut all week to surpass the 1-pound, 5-ounce deficit that faced him as he began this final day.

Danny Plautz of Madison, Wis., was the only angler out of the 42 pros on day one to weigh a limit – 8 pounds, 14 ounces – launching him atop the leaderboard. He spent the next two days patiently waiting in second place while consistently bringing in quality fish. Today, he only managed three fish but that 6-2 bag was enough to bring his four-day total to 27-2, landing him his first championship victory and a check worth $80,000 (plus a $5,000 Mercury bonus). 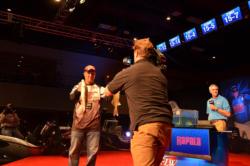 Finishing 10th in points this year, Plautz went on a roll at the end of the regular season capturing back-to-back top-10 finishes on Lake Oahe and Bays de Noc. Plautz spent hours studying maps before he even wet a line on the tournament waters. It was the extra time and effort, along with his momentum from the tail-end of the season that he carried to the championship.

“I knew before I even got the river that there was going to be little current,” said the 30-year-old pro. “I tried to locate certain areas that would have more current and when I got here the first thing I checked was the power dam in Sylvan Slough. I caught six fish there in three hours on the first day of practice and knew that is where I needed to spend my time.”

The Mercury pro spent every day of the tournament anchored up to what he jokingly said was the same rock below the power dam in Pool 16. With the exception of a move he made on day three for 10 minutes and a five-minute move today, Plautz stayed stationary making repeated casts to several rock spines below the dam.

“I averaged about four casts per minute,” Plautz continued. “I casted a lot, my shoulder is pretty sore.”

Plautz was targeting shallow rocks in around 4 feet of water. He would make repeated casts using Berkley Series One rods, Berkley 10/4 Fireline and a variety of crankbaits. Perch, crawfish and firetiger colors were the best producers for him this week. His main goal was to keep his bait wet as often as possible, giving him the best chance at getting bit considering he only received three to six bites each day. 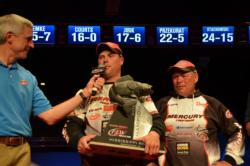 “I honestly was just hoping for a couple bites each day. I wanted to maximize my fishing time which is why I stayed in Pool 16. I didn’t really find anything else in practice that gave me confidence to go anywhere else. I figured if I stuck with my game plan then I would do alright.

Plautz said that he felt confident he could win when he saw Chevy pro Jason Przekurat head down river this morning instead of going up to Pool 14. His nerves then caught up to him as Plautz watched fellow competitor Ed Stachowski catch fish after fish just downstream. Plautz stayed calm and focused under the pressure and managed to get done what he came to accomplish.

“This is unbelievable,” the Wisconsin pro said. “My dad has taught me everything I know and I couldn’t be doing this without his support. This is an amazing honor to get to hoist this trophy. I’m sure while I’m sitting in my deer stand over the next couple of weeks it will finally sink in for me just what I accomplished today.” 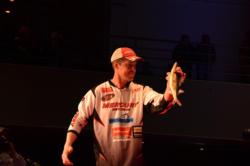 Mercury pro Ed Stachowski of Canton, Mich., slowly climbed his way up the leaderboard all week. The most impressive thing was that Stachowski continued to dial the fish in more each day. Stachowski was the only angler to weigh-in multiple limits this week – one of which was the only limit of the final day. The Mercury pro boated back-to-back limits on days three and four to set his overall total at 24 pounds, 15 ounces. For his efforts, Stachowski earned $19,000 for his finish.

“The thing these fish wanted most was speed,” Stachowski said. “I’d start out trolling slowly but if I wouldn’t get any bites then I would crank it up to 2 miles per hour against the current or 4 mph with the current. These fish have been feeding heavily at night so you really needed to trigger a reaction bite.”

Stachowski was another pro who chose to stay in Pool 16 to allow for more fishing time and chances at a limit. Like Plautz, Stachowski worked the Sylvan Slough area not too far from his Mercury teammate. Stachowski was working a large clam bed, deciding to troll over it since the fish were too spread out to anchor and cast.

For his trolling gear, Stachowski used spinning gear instead of traditional trolling tackle allowing him to present his baits more efficiently in shorter trolling passes. The clam bed had a 5- to 6-foot trough that ran through it which held most of the fish. Berkley Nanofil in 12 pound test was the line of choice to pull number 7 Berkley Flicker Shads. Shad colors worked best, though, speed was more crucial than anything.

“I have to say that without my Mercury engine and kicker I couldn’t have caught these fish,” Stachowski went on to say. “My main engine got me there quickly and my kicker let me dial in the right speed to trigger a bite.

“Today was a crazy day. I caught a lot of fish, and I wouldn’t have done anything different. I executed everything I needed to do.” 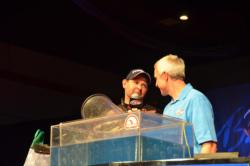 Chevy pro Jason Przekurat of Stevens Point, Wis., led days two and three of the National Guard FLW Walleye Championship this week. With help from a 9-pound kicker on day two from Pool 14, Przekurat held a massive lead going into day three. But like many other anglers this week, the Chevy pro couldn’t convince the right-sized fish to eat and left the door open on the final day.

With a 1-pound, 5-ounce lead to start the day, Przekurat made a decision to head right instead of left at takeoff. Throughout the first two days Przekurat could be found running to Pool 14 to fish a handful of wing dams. With changing conditions on the river and the Pool 14 bite unpredictable he chose to run down to Pool 17 where he felt he could find a limit of saugers.

“I changed today because I knew the conditions up river were getting worse and the sauger guys were catching them good down in (Pool) 17,” said Przekurat who has over $350,000 in career earnings. “I ran to some places I fished the last time the championship was held here. I caught three short fish today and that was it; the fish just weren’t there, they move – that’s why they have tails.

“You have to make decisions based on experience and knowledge which is what I did today. I wouldn’t change this for the world – I had an absolute blast here this week. I like Danny (Plautz) a lot and my hat is off to him. He worked hard for four days and I’m happy for him.” 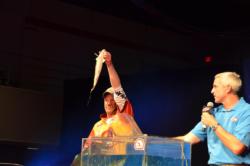 Joining Plautz and Stachowski in Pool 16 up in Sylvan Slough was Evinrude pro Ryan Jirik of Rhinelander, Wis. Grinding it out in a deeper cut by the bridges Jirik was able to pull consistent weights every day. Day one he hauled 4 pounds, 3 ounces, and followed that up with 3-2 on day two. On day three, Jirik caught 5-7 and today found three fish for 4-10. His four day total stands at 17-6 and he earned a check worth $12,500.

Coming into the championship Jirik had no doubt in his mind that there would be one presentation to put fish in the boat.

“I have lots of confidence in a jig and half a nightcrawler,” said Jirik. “In practice my partner and I were using ¼-ounce jigs in the left side of Sylvan Slough. I switched to a 1/8-ounce then finally a 1/16-ounce and instantly started to catch fish. When we moved to the other side of Sylvan in about 7 feet of water, that is when I found out that a 1/8-ounce jig would be perfect.”

Jirik says that he tried both crawlers and minnows on his jigs but noticed that the crawler produced more bites.

“Those fish really wanted the crawler,” Jirik continued. “I went through six dozen crawlers on Friday with my co-angler and we were only using half of the crawler.”

Jirik had planned to just catch one or two fish each day to make the final-day cut. He says he could have never predicted he would have placed as high as he did.

“I just can’t believe it,” Jirik exclaimed. “I knew it would be tougher today because I wasn’t catching as many fish, I was shocked at how far up the leaderboard I went. But I knew if I just kept jigging that I could put fish in the boat and it worked.

“I need to thank Ranger, Evinrude, Cabelas, Elk River Custom Rods, Off Shore Tackle and Downriver Tackle. All of my equipment worked great all week. I am very thankful to have the support of these companies.”

Jirik was also very thankful to all of the support of his friends, family and fans. He said he had a great cheering section on the foot bridge in Sylvan Slough all week and it was awesome to see some of those fans come and visit with him today. 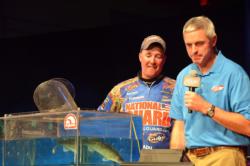 One of the few guys that made the run down to Pool 17 was National Guard pro Mark Courts of Harris, Minn., who has over $182,000 in career winnings. His decision to chase saugers gave him a day-three limit and a total weight of 16 pounds to land fifth place and a $10,000 check.

Courts practiced in every pool that within the tournament boundaries. On the last day of practice, Courts felt that Pool 17 had the numbers of fish he was looking for in order to do well. Just as many other anglers saw, the increased current flow throughout the week carried more weeds down river and made it tough to properly present their baits.

“Yesterday the conditions were pretty good on the river,” said the National Guard pro. “But today was totally different. I could tell it would be tougher and I ran all over (Pool) 17 trying to find some fish.”

Courts utilized three-way rigs to present number 9 and 11 Rapalas to these picky saugers and walleye. He ran a 30 pound Spiderwire mainline and 10 pound Trilene XT leader coming from the swivel. A 3-or 4-ounce weight was attached as the drop on the rig.

The Minnesotan angler picked up his one keeper for the day around mid-morning. A little later on while he was trolling he got a strike that about took the rod out of his hand. After a hard fought battle with what he hoped was a big marble eye, Courts boated a 10-pound flathead catfish.

Courts had his efforts in Pool 17 cut short due to a call from the lockmaster telling him that he needed to hurry up and lock through before the next barge got close. Courts continued to fish in Pool 16 but only could connect with a few shorts.

Rounding out the top-10 pros from the National Guard FLW Walleye Championship: