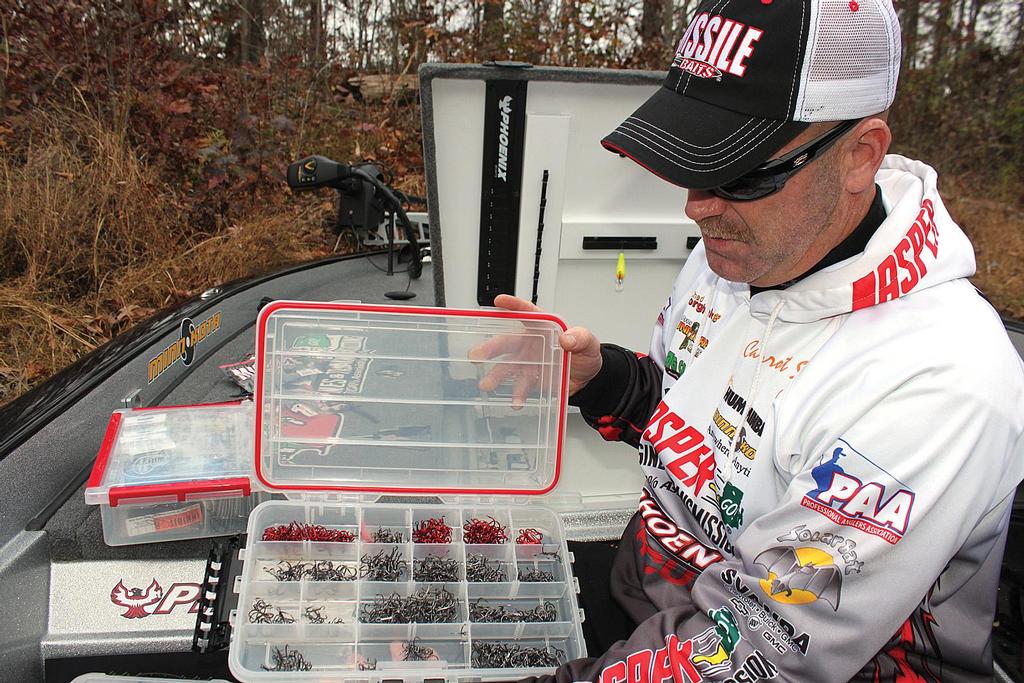 There is no one-size-fits-all treble hook. As such, choosing a the right treble for the job can put more fish in the boat. Above, FLW Tour pro Chad Morgenthaler inspects his treble hook inventory.
October 18, 2013 • Jeff Samsel • Archives

(Editor’s note: This article originally appeared in the 2013 October issue of Bass Fishing magazine. To read more compelling articles from Bass Fishing magazine each month, become an FLW subscriber member. If you’d like to sign up for a digital subscription to access articles online, click here).

As a general rule, the treble hooks on the lures of most tournament pros aren’t original equipment. Less-expensive stock trebles are usually replaced with ultra-sharp premium hooks of the angler’s choice.

It goes beyond quality, though. Some high-end crankbaits, jerkbaits and topwater lures are equipped with tournament-ready hooks, but pros commonly want a different shank length, bend, wire diameter, size or color of treble than the lure-maker chooses to use. And eventually all treble hooks need to be replaced due to rust, damage, dullness or other factors resulting from wear and tear.

Hook manufacturers use various processes for sharpening hook points and different point designs, and everyone measures sharpness differently. We won’t dive into the sharpness debate, but instead will break down hook design characteristics and sizing ideas to consider how such distinctions affect the action of lures and an angler’s capacity to hook fish and keep them hooked. 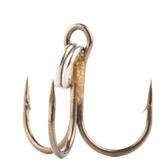 Short shank – The shortened distance from the eye to the bend helps trebles stay snug to a lure’s body and keeps hooks from catching each other on shorter lures. This style is also less apt to snag cover.

Round bend – As the name suggests, the bend is evenly rounded between the shank and the shaft. The point goes straight up, which is helpful for hooking more fish even when they only slash at baits.

Extra-wide gap – The hook’s gap, where it normally is measured for sizing, is from the shank to the point. An “extra-wide gap” is actually extra wide farther down in the bend, creating an inward point angle. The point aiming toward the hook eye offers added holding power to keep large, hard-fighting fish hooked. 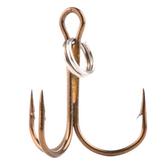 Standard wire – The standard treble wire can be lighter than that of a single hook used for the same size of fish because pressure from a fish’s weight typically gets distributed to more than one bend. The lighter wire allows for better penetration, and its light weight doesn’t dampen lure action.

2X or heavy wire – Heavier gauge hooks are stronger and are most commonly used when lures get matched with big baits with less delicate actions – such as magnum deep-diving crankbaits. They’re also a popular choice for fishing with low-stretch braid or heavy fluorocarbon.

The right treble for the job

There is no one-size-fits-all treble hook, nor does one particular hook belong on a particular hard lure for all fishing scenarios. Like matching hooks to favorite soft plastics, choosing the right treble for the job at hand can put more fish in the boat. Things to consider when choosing hooks with the design features mentioned:

Lure size – Nothing is more frustrating than casting a topwater plug into a scrum of schooling fish, only to have the treble hooks tangle each other or the line, ruining the cast. Match hook size to lure size carefully so the hooks won’t catch on each other. If the front hook is catching on the line, consider downsizing one size. Depending on cover and a lure’s front or middle hook placement, sometimes an upsized tail hook can be added without altering the action.

Action – For Walmart FLW Tour pro Chad Morgenthaler of Coulterville, Ill., the short answer to the question of choosing treble hook size is, “the biggest hooks I can get away with without killing the action.”

Often that’s a size or two larger than the hooks packaged with the lure. That said, sometimes hook size can be used to dial in an “in-between” action or a particular action for the conditions. For instance, when Morgenthaler rigs a Megabass Vision 110 jerkbait for spring fishing, he uses No. 6 hooks in the front and the middle and a slightly larger No. 4 treble in the back. However, for summer fishing he switches to all No. 6 trebles because it allows the lure to “flow” more when he works it.

Similarly, a popper rigged with upsized hooks might float a little “lower” in the water, resulting in more water resistance when it’s twitched. And big heavy trebles can deaden the action of a crankbait, which might be good or bad depending on the situation.

Cover – Morgenthaler favors the light wire and design of Daiichi round-bend trebles for hooking slashing fish and the design of wide-gap Mustad Triple Grips for staying out of cover and for keeping hard-fighting fish hooked. Many of his hook combinations include those two models.

He uses round-bend hooks for all jerkbait applications because jerkbaits mostly travel through open water and often get slashed at by fish.

When encountering thick brush, such as with a crankbait, sometimes it’s necessary to downsize the front hook – or both hooks – to avoid snagging the brush, especially if using a short-billed crankbait or a model that runs very “flat,” with the lure body horizontal, as opposed to tail-up. The same applies when cranking mucky areas with shallow lures that might “scoop up” silt and leaf litter.

For three-hook topwaters, such as a Heddon Spook or a Reaction Innovations Vixen, Morgenthaler uses No. 4 round bends on the front and the back and a No. 2 Triple Grip hook in the middle. For bigger diving crankbaits he puts a Triple Grip in the front – because that hook is less likely to snag when it bumps cover – and rigs a round-bend hook on the back. To give size perspective for a medium-sized bait, he uses a No. 2 Triple Grip on the front and a No. 4 Daiichi round bend on the back of a Strike King Pro-Model Series 5.

“Most of the trebles that fishermen use are too thick,” Morgenthaler says. “They use soft rods and light line and don’t get good penetration with thick hooks.”

Choosing to go larger in size or heavier in thickness can alter a lure’s balance and action, but by opting for light-wire hooks, an angler might be able to get away with a larger gap size than the manufacturer employed and still keep the lure in balance.

Beginning with the ICAST award-winning SureSet design, which includes one extended extra-wide-gap hook for added grabbing power (great for many crankbait applications), this version comes feather-dressed – such as on the back treble of a Rapala X-Rap – for added attraction.

Colors: six color combos of red or white feathers with either a black nickel or tin red hook

OK, it’s not technically a treble if it has four points, but a Decoy X-S21 Quad Hook definitely fits the same niche as a treble, simply adding an extra point for the fish to find when they attack a lure. It’s a popular addition to many big-bodied swimbaits because when one point is buried in the lure, there are still three exposed.

Contact: Decoy does not have a U.S. website, but its hooks are available at several popular online tackle shops and sites specializing in Asian tackle brands.

Daiichi led the way with red hooks because of research indicating that fish attacked wounded prey first and react to a stressed fish’s red gill flash. Pros also like red on a bait because it gives fish a narrower target, and the hook obviously is a good place for the fish to target.

Price: $3.50 for packs of three to five, depending on size

BasStar SpinTech Trebles spin freely on a shaft to deny fish leverage to twist off a hook. When a fish shifts its momentum, these hooks reposition themselves accordingly so the fish stay hooked.