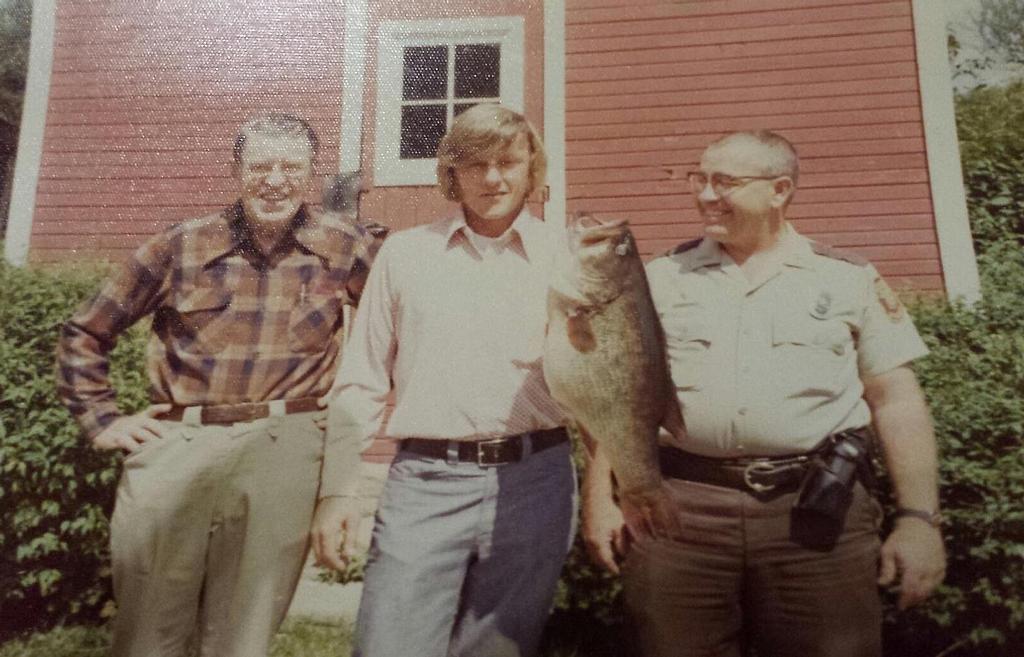 On the evening of May 26, 1976, Roy Landsberger hooked and landed a 13.13-pound largemouth bass from a small pond in Northeast Ohio. To date, it is the largest bass ever recorded in Ohio’s history.

For nearly 40 years the record has remained unbroken. In the eyes of many, it is a mark that is untouchable. While the record itself is known by most avid Ohio bass anglers, the story behind the catch remains shrouded in mystery – until now. What follows is the story of Roy Landsberger’s Ohio record largemouth.

In 1973, three years prior to breaking the record, Landsberger had returned to his hometown of Kensington, Ohio, after serving in the Vietnam War. As a soldier in the United States Army, Landsberger had driven a tanker truck that supplied fuel to U.S. aircraft for missions in Laos and Cambodia.

Resting 20 miles due-east of Canton on the outskirts of Appalachian country, Kensington was a quaint town, surrounded by rolling hills, lush forests and fertile farmland. Landsberger took a job as a laborer at the nearby Robert F. Donahey Tree Farm. Donahey was an insurance executive from Cleveland who had built a home on the 1,000-acre farm where he and his crew raised evergreens that were eventually harvested as Christmas trees.

One of the perks of Landsberger’s job was that he was permitted to fish the seven spring-fed ponds that were clustered together on the property. The ponds were connected to each other by a series of small runoff creeks, and the largest pond, which was approximately one and a half acres in size, featured an earthen dam and concrete spillway. In the eyes of 25 year old Landsberger, there was no better way to melt away the rigors of a long day’s labor than to fish along the banks of the ponds at the end of a shift. 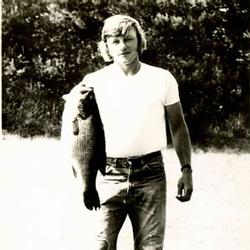 On the evening he broke the record, Landsberger went fishing by himself, as he had done most every night that spring. Armed with his antique Bache Brown Spinster reel, which was manufactured by the Lionel Train Company, and a red fishing rod his mother had acquired for him using S&H Green Stamps, Landsberger trekked to the earthen dam bank of the big pond.

The pond tapered from 2 feet at the edge to approximately 12 feet at the bottom of the drop-off. Landsberger stealthily crept his way down the bank, casting a yellow-and-black spotted Arbogast Jitterbug along the water’s edge. As darkness began to fall, and with little action to speak of, he told himself he would retrieve the topwater plug and make one final cast. Splashing and plopping as it danced its way back to shore, the Jitterbug was suddenly inhaled by an enormous fish, right at Landsberger’s feet.

“It hit right as I was about to lift the lure out of the water. Because it hit so close and it was pretty dark out, I couldn’t tell right away what kind of fish it was. I was using 12-pound line, and it was pulling line from my drag really quickly, so I knew it was big,” explained Landsberger.

The fish surged towards deeper water, and Landsberger expertly turned it to the shallows. He thought he had gained the upper hand, but the fish decided it wasn’t quite done, making a second push for deep water.

“As I was fighting the fish back towards the bank for the second time, she surfaced and I saw her mouth. That’s when I knew it was a bass,” he said.

Not willing to risk losing the giant fish, Landsberger saw his chance to land her as she made her approach to shore. He stepped into the water up to his knees, and lipped the behemoth by her lower jaw.

“When I looked down into her throat I realized she had only a single hook from the Jitterbug in the meaty part of her upper mouth. My first thought was that bass just don’t grow this big,” he said.

Landsberger knew he was holding an extraordinary fish. Thinking quickly, he strung the fish up through its gills with a piece of rope, tied it to the metal grate that covered the spillway overflow, and then ran a short distance to Mr. Donahey’s house.

“I told Mr. Donahey about how big the fish was, and he decided to call Lester Jones, the area game warden, to let him know about the catch,” he recalled.

Upon the arrival of Jones, Landsberger drove the men in his pickup truck to the edge of the pond, leaving the headlights shining to where the monster was tied-off.

“Jones couldn’t believe her size. He was astonished. He knew it was something special and told me we had to get it on ice until the big shots from the ODNR office in Akron could come inspect the fish,” Landsberger recalled.

Jones had brought with him a set of baby scales, the same set he always used when an angler called in a possible record catch. He placed the fish, still alive and dripping with eggs, on the scales. To the men’s disbelief, the needle settled just above the 14-pound mark. Landsberger put the fish in the plastic vegetable storage bin at the bottom of Donahey’s refrigerator and covered her with ice.

The next afternoon, May 27, three officials from the ODNR made their way down to Kensington and met Landsberger, Jones and Donahey at a meat locker in town that had a set of certified scales. In the presence of all men, the fish was weighed in at an astounding 13.13 pounds. From nose to tail it measured 25 and 1/16 inches.

But there was a problem. Because none of the officials had ever seen or heard of a pure Northern-strain largemouth of that size living in Ohio, they were skeptical, and took the fish with them to be examined at The Ohio State University Fish Division in Columbus. Officials suspected that Landsberger’s fish could possibly be a transplanted Florida-strain largemouth.

A week prior to the one-year anniversary of the date Landsberger landed the fish, it was determined after undergoing numerous tests at OSU that the fish was, in fact, a 13-year-old female pure Northern-strain largemouth, giving Landsberger the official Ohio state record. 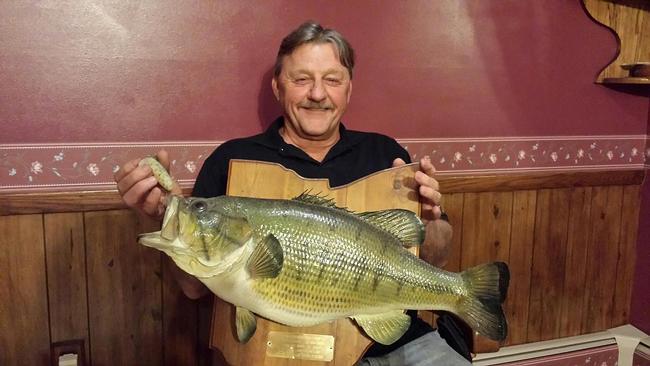 Shortly after the record was recognized, Landsberger was contacted by Jack Lash, a renowned taxidermist from Massillon, Ohio. Lash took the fish and mounted it, free of charge, for Landsberger. Today, Landsberger keeps the mount, as well as the original rod, reel and the Jitterbug at his home in Kensington.

The newspaper reporters called – everyone wanted to hear about his record bass. But Landsberger never capitalized on the record financially, and to this day hasn’t earned a penny as a result of the catch.

“I didn’t have a clue about fishing for big bass at the time. I didn’t realize that companies would endorse you if you were using their rod and reel. If only I had been using a Shakespeare, who knows,” he exclaimed.

After breaking the record, Landsberger decided to take a trip to Dale Hollow Reservoir, home of the world record smallmouth, in pursuit of possibly breaking another record.

“I went down to Dale Hollow and rented a boat for an entire week, and didn’t catch a single smallmouth,” he said, laughing at the futility of the trip.

What made the Donahey pond special? What about its makeup allowed for a bass to grow to such an impressive weight? For starters, according to Landsberger, it benefited from two sources of fresh water inflow, which included a creek and a natural spring at the bottom of the pond. The pond supported a strong forage base, consisting primarily of large shiners, shad, bluegills, crawdads and bull frogs, all of which thrived in the clear, cool water.

“I’m convinced that fish thought she was eating one of those big bull frogs when she struck,” he said.

To Landsberger’s knowledge, the ponds had been stocked at some point in the past, although he couldn’t offer details beyond a fleeting recollection, meaning the genetic source of the record fish will likely never be known.

You’re probably wondering about the location of the pond? Located approximately 5 miles to the south of Kensington, it remained, untouched, in its record-breaking form, until 1987 when the Boy Scouts of America purchased the land from Donahey and created the Seven Ranges Boy Scout Reservation. Shortly after the purchase, the seven ponds on the property were flooded and dammed-up to create a single 30-acre impoundment, known today as Lake Don Brown. 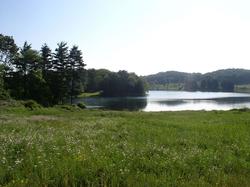 Although the lake is not open to the public, Landsberger has hosted a small bass tournament on the lake each year for a few of his closest friends.

“That fish’s genes are still in there. I’ve been fishing for them ever since, but haven’t caught another big one like that. The biggest we’ve caught during any of those tournaments is 6 pounds – but I know there’s still a big one in there,” he opined.

Now 63 years old, Landsberger retired last year after nearly 40 years in the tree farming business. A father of three, and grandfather to three granddaughters, he still fishes regularly on Northeast Ohio’s many inland lakes, as well as Lake Erie.

As our conversation came to an end, I asked him if he believed the record would ever be broken.

“I thought it would be broken by now, I really did. It’s been almost 40 years and nobody’s done it. I just don’t know. I just don’t know,” he replied softly, as his thoughts drifted back to a warm May evening in 1976 when a young man went fishing, and accomplished something truly extraordinary.

To read more from Mike Reeves, be sure to check out his blog over at www.ohiobassblog.com