Sight Unseen, Spencer Shuffield is Ready for Anything 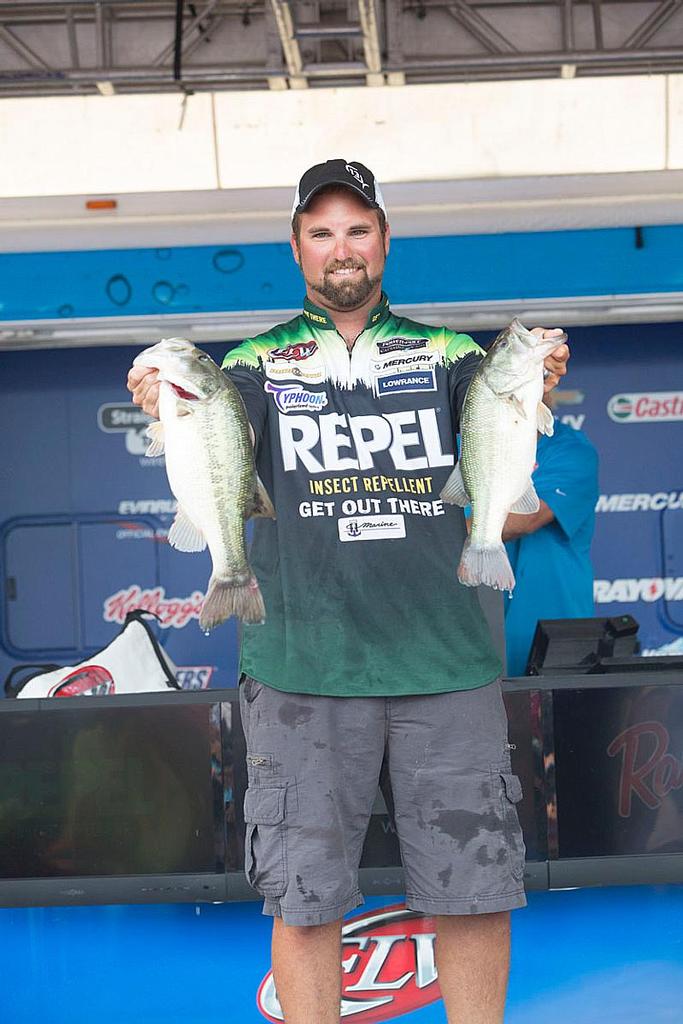 Nobody in the tournament caught more keepers than Spencer Shuffield of Arkansas. What he lacked were a few big fish to up his average weight. Photo by Shane Durrance.
August 4, 2014 • Colin Moore • Archives

If preparation is the precursor to victory, then Spencer Shuffield is starting out in the hole. Not only did he not pre-practice at Lake Murray to prepare for the Forrest Wood Cup, he hasn’t even laid eyes on the lake since he fished the 2008 Forrest Wood Cup there. All he remembers about it is that it was the toughest championship he ever fished, and he’s competed in seven of them since beginning his FLW career as a co-angler in 2007.

In his defense, Shuffield isn’t the same fisherman he was back then. He was a co-angler at the 2008 event, a year out of high school and still learning about what makes bass tick. Today, after three years as a pro, he’s a seasoned veteran. Well, back up a bit … part of that seasoning as a pro owes to his pedigree. He’s the son of tournament great Ron Shuffield, and that in itself is worth a lifetime of fishing lessons.

For practical reasons, the younger Shuffield isn’t all that concerned that he didn’t pre-fish Lake Murray. As he has proved with several top-10 finishes as a pro and co-angler, Shuffield has a knack for catching fish, regardless of his inexperience on most lakes. He finished 18th on the Walmart FLW Tour Angler of the Year roster this year.

“I have absolutely no knowledge about Murray,” confesses the 25-year-old Arkansas pro. “I came close to going over there for four to five days, but then I thought, no, it’s pointless. I don’t want to go back in practice and waste time trying to figure out where the fish went that I caught in pre-practice. I’m just going to wing it.”

Actually, Shuffield has Lake Murray sized up fairly well, or so he thinks. Though it doesn’t match up perfectly with his home lake of Lake Ouachita in all respects, it’s close enough that he knows where to start his search.

“Used to be, on Lake Ouachita guys would fish deep brush this time of year, but it’s not like that anymore,” notes Shuffield. “Now most of the guys who catch fish and do well in local tournaments are fishing shallow. I’m pretty sure that’s the way it’s going to be at Murray.

“There are going to be shallow fish, and there are going to be offshore, suspended fish following bait around,” he adds. “If I could get on some of those deep fish that are hugging the bottom, I believe I could do some good, but I’m not counting on that happening.”

Shuffield expects the weather in Lake Murray country to be about the same as it was in 2008, which renders down into four days of sunny mornings and hot afternoons interrupted by thunderstorms. That doesn’t bother him, but the likelihood that fishing patterns will be unpredictable – and perhaps unsustainable – does.

As a co-angler in 2008, Shuffield scratched the first day but caught five fish weighing 8 pounds the second day to finish 25th (his dad, Ron, finished 16th on the pro side). His best round came when he shared a boat with Jason Hickey of Weiser, Id. The pair fished a feeder creek with a fairly well-defined drop-off and hit the jackpot, though the majority of the bass they found were undersized.

“It was a grind, but then we hit this one little stretch and must have caught 30 bass apiece. Most of them were 12- or 13-inch throwbacks [the size limit is 14 inches],” recalls Shuffield. “I got all my fish on a drop-shot rig and a Roboworm. With about two minutes to go before we had to leave, I caught a 2-pounder, and that filled out my limit.”

No doubt Shuffield will return to that creek in practice, but he’s more likely to adopt a milk-run strategy that involves fishing several stretches of shoreline.

“I wish I knew then what I know now about catching fish cruising the bank. I remember seeing a lot of 3- and 4-pound bass swimming around,” says Shuffield. “I didn’t really understand how to catch them at the time, and neither did my partners. That was before prop baits like the Brian’s [Prop] Bee and walking poppers like the [Lucky Craft] Gunfish came along. I’ll be better prepared.”

Indeed, Shuffield is already packed for Lake Murray, and his tackle selection includes plenty of topwater hard baits, frogs, crankbaits and jigs, as well as shaky-head and drop-shot components. In other words, he’ll be ready for whatever the South Carolina fishery serves up.

“I’m going to have some of everything for this one,” he says of the Cup. “I might have to do a little bit of it all to scratch out a limit every day.”