The Bulldogs’ Day of Domination

New Melones Lake has become a destination for newsmaking anglers. Back in February, Keith Bryan of Powell Rods landed a 10.48-pound spotted bass from the California lake east of Stockton, and the fish has since been declared the new world record spotted bass. Then, on Sept. 6, college bass fishing teams from across the West converged there for the latest FLW College Fishing Western Conference event. California State University-Fresno sent a trio of teams to compete, and the Bulldogs swept the top three spots in the standings.

As was the case for Bryan, spotted bass was the show-stopper for CSU-Fresno – with the exception of one monster largemouth. Still, though New Melones is home to largemouths and smallmouths as well, it’s their spotted cousin that made all the difference for the CSU-Fresno club. Its teams relied on local experience and an in-depth understanding of how spotted bass react during low-water periods in California reservoirs for their top finishes.

Here’s the roster of A-listers and how they made it happen:

Jeremy Pitts of Visalia, Calif., likely arrived at this event with more experience on New Melones than anyone else in the field.

“I’ve been fishing New Melones since I was 3 years old, and we used to live there,” he says. “My family now has a lake house on Tulloch Reservoir, which is just below New Melones Dam. I am very familiar with the lake and spent more than a month pre-fishing for this event.”

Once the tournament arrived, Pitts and teammate Michael Cantu of Fresno, Calif., followed a specific game plan that tracked the movement of the fish as the water continued to drop due to drought conditions and seasonal irrigational needs for lakes in the area.

“We were targeting points between 25 and 30 feet deep,” says Pitts. “It seemed like all of the other teams were fishing shallow along the bank.”

While most of the duo’s catch was composed of spotted bass, Pitts picked a good moment to boat the biggest bass of his life: a 12-pound, 5-ounce monster largemouth, which he caught with a California Reservoir Lures jig.

“The next cast, on the same exact spot, I caught a spotted bass that was close to 4 pounds,” adds Pitts. 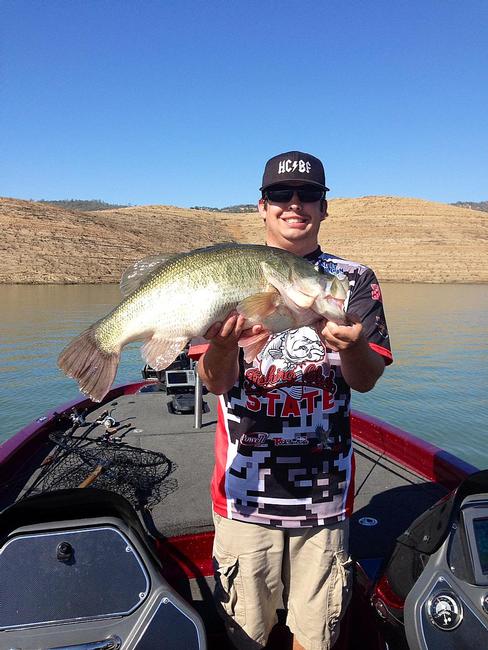 Fresno’s Cory Kerber of Kerman, Calif., also has a wealth of experience on New Melones, and coincidently much of it is from fishing with first-place finisher Jeremy Pitts. Kerber and Pitts have paired up to fish local team tournaments on New Melones and other area lakes, as both grew up in the area.

“We are used to fishing tough events and are comfortable fishing deep and offshore. It’s just our fishing style,” Kerber says. “While most of the other teams were fishing shallow first thing in the morning and then moving deep, we were doing the opposite, and I think that’s why we all did well.

Kerber says one of the most important keys was dealing with extremely low water levels in the region, which is prone to water-level fluctuations.

“It’s historically low this year because of the drought,” he says. “Each year they pull water for the farmlands, so the water always drops. But this year it’s 50 to 75 feet below full pool. The low water exposed so much brush and other things along the shoreline that many of the teams were fishing the shallow stuff because it looked so good, but the spotted bass always seem to get on those long points in deeper water when the water is that low.”

Kerber’s partner in this tournament was Joseph Piedimonte of Salinas, Calif. They relied on a variety of jigs from California Reservoir Lures. Their 15-pound, 13-ounce bag of spotted bass was an impressive haul and included a 5-15 fish. Had it not been for the fish-of-a-lifetime caught by Pitts, Kerber and Piedimonte likely would have walked away with the title.

Of the three Fresno teams, Carl Nelson of Hanford, Calif., and Victor Evans of Fresno, Calif., had spent the least amount of fishing time on New Melones. However, they were quick to figure out the lake based on what they have learned from other fisheries closer to campus.

“All of the lakes we fish have tons of spotted bass, and all of them are drawn down every year because they’re reservoirs,” says Nelson. “That really helped us figure out what to do, because we’ve learned what to do when the water drops.

Nelson and Evans also relied on California Reservoir Lures jigs for their top finish and used a color that mimics sculpin, a favorite forage for bass.

“I heard that the bass around here really like to eat sculpin and that it was a great color, and it also looks like a crawfish,” Nelson adds. “The majority of our lakes are full of crawfish.”

Even though all of the Fresno State teams fished similar areas and had nearly identical game plans, it all came together for them independent of each other. Pitts recalls one area he found in the time leading up to the tournament.

“It was a great area that was a submerged hump, but as the water kept dropping it became more and more exposed,” he says. “The fish were still all over it. I went to check it out in pre-fish, and Cory came there and jokingly said, ‘What are you doing in my spot?’ He’d found it too.”

The spot was key for both teams, and they had found it separately. The third-place team of Nelson and Evans also found the same area during practice and rotated through it at different times throughout the tournament day.

The dominance of the Fresno State bass club was due to a variety of factors, including a trove of local knowledge and a deep understanding of spotted bass, and the historically low water conditions that gave the teams an advantage over the rest of the FLW College Fishing Western Conference teams.