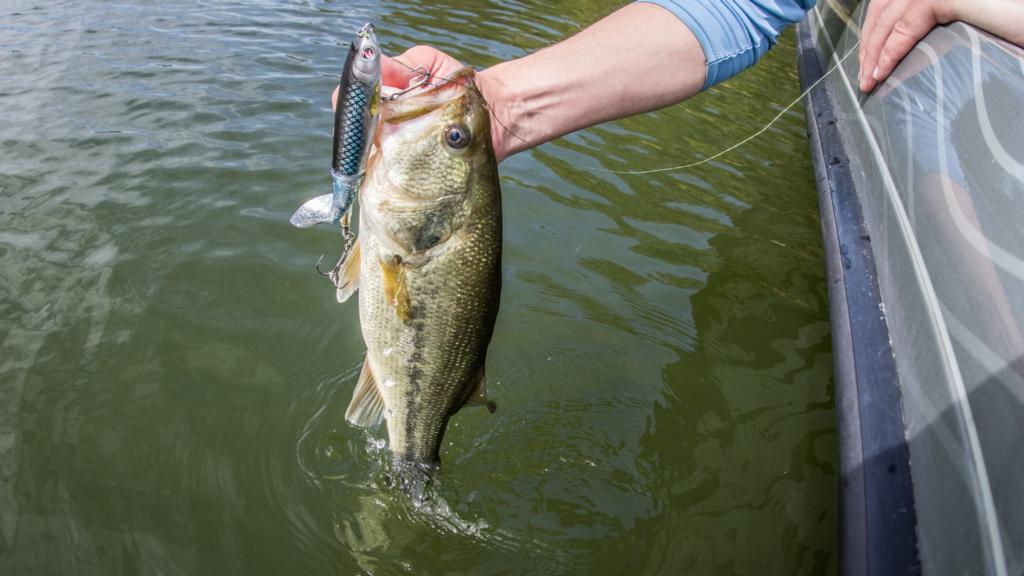 Although it’s not exactly a new bait, River2Sea’s Whopper Plopper has become the topwater sensation of 2015. It’s been flying off tackle store shelves, despite having gone largely unreported for generating more than a few big-time tournament paydays. Which begs the question: What caused this unique topwater bait to jump from being known more or less as a musky killer to blossoming into a clandestine must-have for bass pros? The answer is fairly simple: It catches bass, and lots of them.

When we asked them to spill the beans on the Whopper Plopper, 2015 FLW Series Western Division Angler of the Year Joe Uribe Jr. and FLW Bass Fishing League Lake of the Ozarks Regional champion Shonn Goodwin were willing to share what they know about the bait. 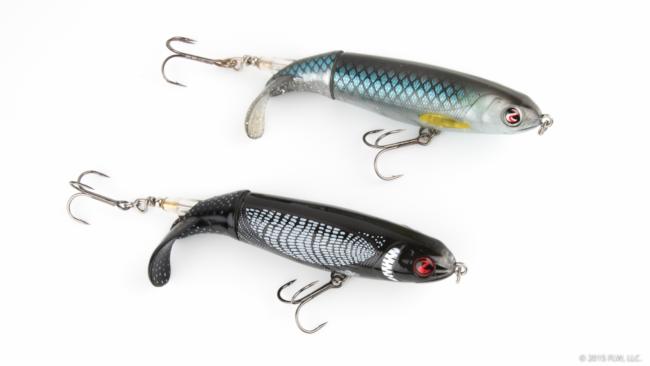 TV personality and well-known angler Larry Dahlberg has been using homemade versions of the Whopper Plopper for decades to persuade lure-shy muskies into biting. Eventually, Dahlberg teamed up with River2Sea to create the 7 1/2-inch Whopper Plopper 190 as a resilient musky and pike lure. Shortly after the release of the 190, the downsized 90 (3 1/2-inch) and 130 (5-inch) models entered the market to meet the needs of other anglers, with the 130 becoming the most popular size for bass.

The Whopper Plopper is sort of a hybrid between a traditional prop bait and a buzzbait. It floats like a prop bait, and has a similar profile, but its large flexible tail makes a loud plop plop sound when fished on a straight retrieve. The sound is unique to topwaters, though it’s most similar to the churning sound of a buzzbait. The Whopper Plopper casts a mile too, and the 130 size presents bass with a pretty beefy profile when viewed from below.

Because it floats, the Whopper Plopper has some distinct advantages over other lures. If a fish misses it, the angler can stop the bait in place and let it rest on the water. It can be ripped in short bursts. And it can be fished at a variety of speeds, while a buzzbait has a minimum speed in order to stay on the surface. 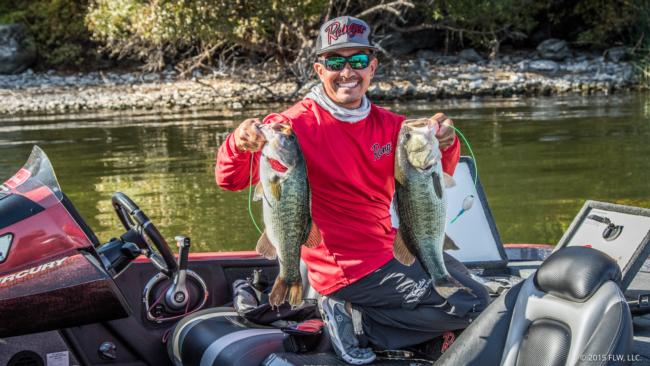 Neither Goodwin nor Uribe has had enough time to realize the full potential of the Whopper Plopper or the scenarios where it’s the best fit. However, their tournament results suggest that it’s a great bait for imitating big gizzard shad and for tormenting fry guarders in the postspawn.

The bait was used – though it went unreported – at several summertime FLW Tour events when the bass were feeding along grass lines and under docks, as well as for schooling fish and in fall events in a number of scenarios.

Goodwin and Uribe offer details of their most productive Whopper Plopper patterns.

Fall shad eaters – Goodwin used the Whopper Plopper 130 to catch about 80 percent of his fish en route to amassing a three-day total of 14 bass for 43 pounds, 13 ounces at the Lake of the Ozarks Regional in October. He took advantage of the lure’s bulk and loud presentation to dial in on a pattern that involved hitting nearly 100 points a day to catch bass that were keying in on gizzard shad.

“The Whopper Plopper was such a good imitation of the gizzard shad,” Goodwin says. “And the reason I chose it over a buzzbait, or any other topwater, was that the body of the Whopper Plopper had a really big profile for the fish to target.”

Goodwin’s presentation was to cast and wind the bait – pretty simple, really.

Picking on fry guarders – Uribe also used the Whopper Plopper 130 to catch about 80 percent of his fish at the FLW Series Western Division’s Cal Delta tournament. He finished sixth with 54 pounds, 6 ounces.

Uribe found the topwater to be an effective search bait. His strategy involved hitting isolated tule berms around spawning flats and grass-lined levies in search of big postspawn females.

He made short pitches up against the grass edges, then brought the bait out on a straight retrieve. Many of his fish were guarding fry and likely bit the lure in defense. Some were spawning. Others were actively feeding. 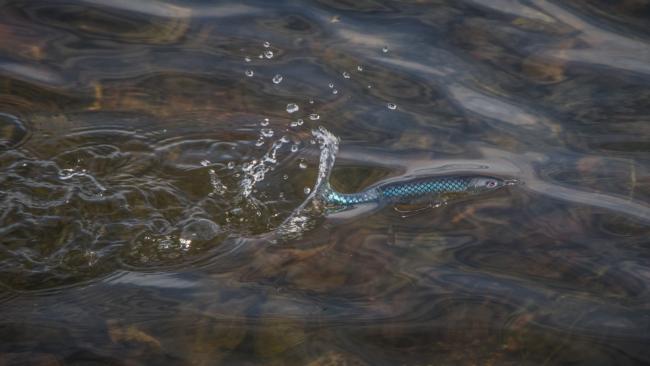 Dialing in on the perfect speed to produce the most desirable sound might take some trial and error, but according to Goodwin and Uribe, a fast and steady retrieve seems to work the best.

“One thing that I have found is that most people think they will catch more fish if they slow down,” says Goodwin. “I do the opposite. I try to speed up. So the key to my week [at Lake of the Ozarks] was reeling it as fast as I could to really get the fish’s predatory switch flipped.”

Uribe also found that a fast and steady retrieve was the way to go, but he acknowledges that sometimes letting the lure float in place for a moment immediately after it hit the water helped with striking the interest of potentially spooked fish.

“The nice thing about the Whopper Plopper, as opposed to a double-buzz or single buzzbait, is that as soon as it hits the water I don’t have to retrieve it real fast to keep it on the surface,” says Uribe. “[At the Delta] I was able to place it in a shallow pocket, let the ripples die down and then start retrieving. Sometimes when I would cast up in an area I think it would spook the fish for a second, but if I’d move the bait real fast, it would move out of the strike zone. By letting it rest for a second, the fish would spin around and reposition itself. A lot of the times then, it was three cranks of the reel and I’d get bit.” 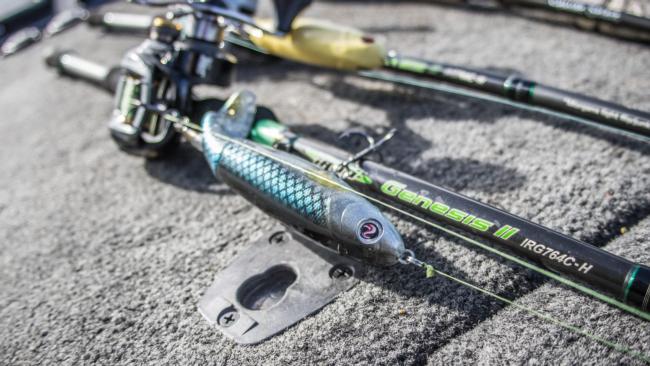 The Whopper Plopper is available in 15 colors to match several types of forage. At Lake of the Ozarks, Goodwin threw mainly the loon (black) color because he prefers black for any topwater, especially in the overcast conditions he faced there. He also relied on “blood blue” when he came across clearer water or just to switch it up if he hadn’t gotten bit in a while. Uribe also used the loon color at the Delta but also worked in the bone color.

Uribe and Goodwin have been fishing with the Whopper Plopper for only a year, which means they have yet to master it totally. The same goes for many others who have discovered the Whopper Plopper only recently. But will it grow to become a standard go-to lure used among tournament and trophy anglers?

The answer to that question will come over time. It’s a unique lure that doesn’t fit perfectly into any existing topwater categories, and many bass have yet to see one buzz by. That is an attraction in itself. Sometimes the “newness” of a lure is all it takes to draw strikes.