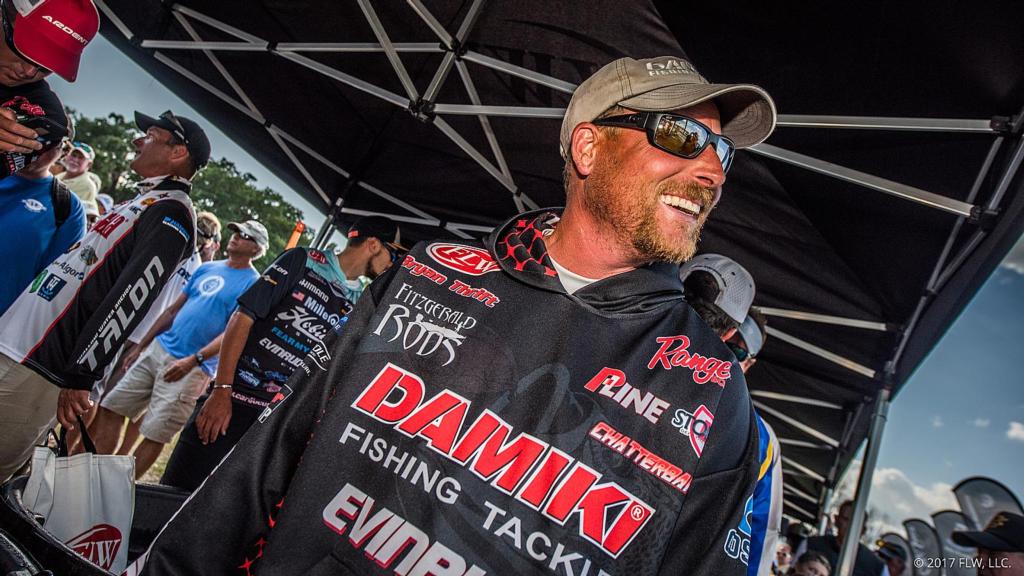 Well, Bryan Thrift is on one right now that’s already historic, and it could challenge one many might consider untouchable.

Sitting in fourth after today, the Shelby, N.C., pro extended his streak of top 10s to five-straight FLW Tour events between 2016 and 2017. That’s impressive by itself, considering it extended his FLW record, as he broke the record at Lake Travis a few weeks ago (the previous record was three straight).

More impressive is that one could argue Thrift’s streak should already be at seven.

“I think FLW should give me the Lake Champlain event,” Thrift jokes after weighing in today. “I tied for 10th and lost to Wesley [Strader] on a tiebreaker.”

Five or seven, they’re both nearly unheard of in our sport. He’s gotten a lot of notoriety this season for coming in second, but really Thrift is the best angler in the world. And there’s not even much of a debate. He’s already been ranked No. 1 via Bass Rankings for much of the last two years (and will soon be again after this tournament), as he’s averaged beating more than 83-percent of the field the last two seasons – one of the best stretches in the modern history of the sport.

“I can’t explain it,” says Thrift. “I’ve been practicing the same and fishing the same as I always do. I’ve just been blessed to make good decisions and to be catching fish I probably shouldn’t catch.”

A perfect example is today, when Thrift struggled. Yet, with two minutes until check-in, Thrift pulled up his trolling motor, made one final flip and caught his biggest fish.

One thing Thrift did acknowledge was how his fishing style has adapted in recent years, noting how in year’s past he would run-and-gun at breakneck speeds. Now, he’s learned how to get comfortable in an area and “force feed ‘em” when he hasn’t found enough fish for his usual style.

Yet, as impressive as his current streak is, we did some digging to see if five or seven would be the longest streak by any angler in modern history via Bass Rankings. Turns out, it’s not. The longest top-10 streak in modern-tournament history is Kevin VanDam’s staggering nine straight between the 2005 and 2006 seasons.

So the question becomes, can he reach 10.

“I want to,” says Thrift. “I’d like to keep the streak going until I retire!”