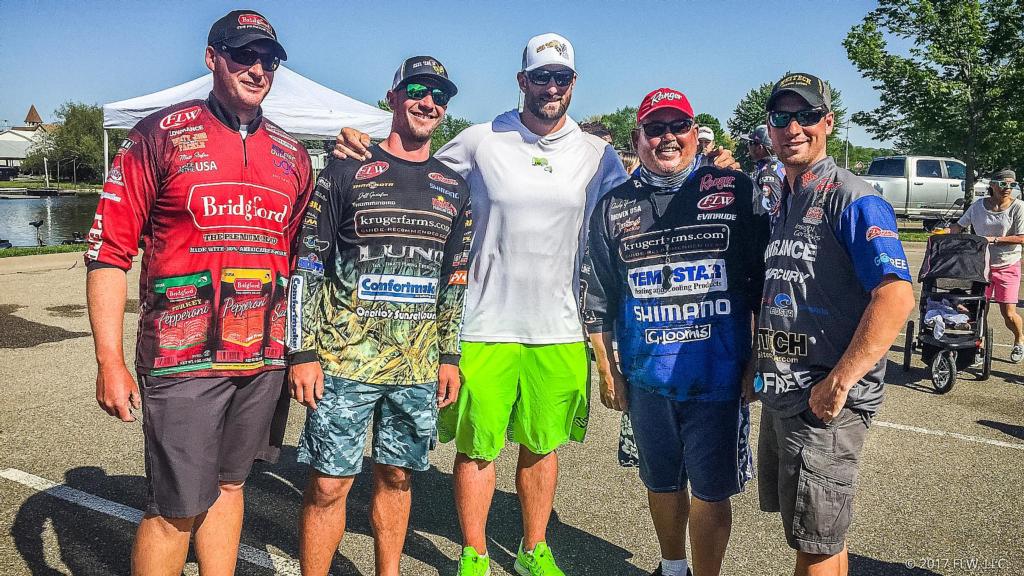 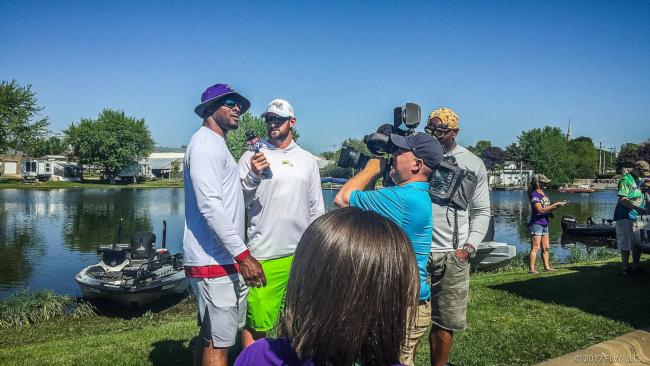 The event started Friday evening with an auction dinner at Slippery’s Tavern & Restaurant, made famous by the movies “Grumpy Old Men” and “Grumpier Old Men.” Sixteen FLW Tour pros, including Scott Martin, Jay Yelas and Cody Meyer, were randomly paired with Minnesota Vikings players such as Robison, Sam Bradford and Everson Griffin and auctioned off to the highest bidder as partners for a VIP fishing tournament being held Saturday. In addition to the FLW/Viking VIP boat auctions, silent and live auctions were held for other prizes such as an all-expense-paid trip for four to Lake Fork Marina for a fishing trip with Robison and the exclusive naming rights to a K9 that is being donated to a police department. 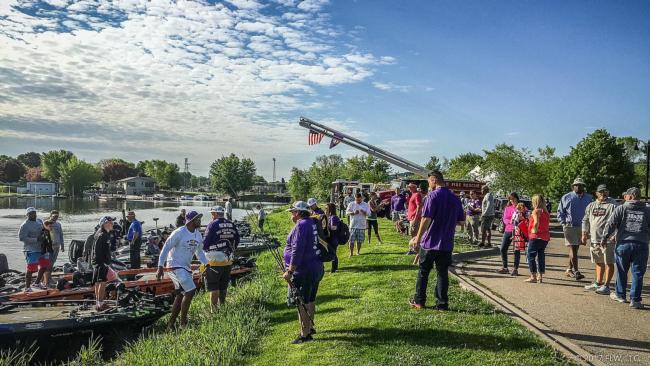 Saturday, the VIP auction winners awoke to near-perfect weather conditions for a day on the water. After breakfast, the Vikings players, FLW Tour pros and other members of the teams launched from Izaak Walton Park in Wabasha. Although a few of the participants didn’t have much experience fishing on the Mississippi River, all 17 teams in the competition managed to put at least two keepers in the boat. 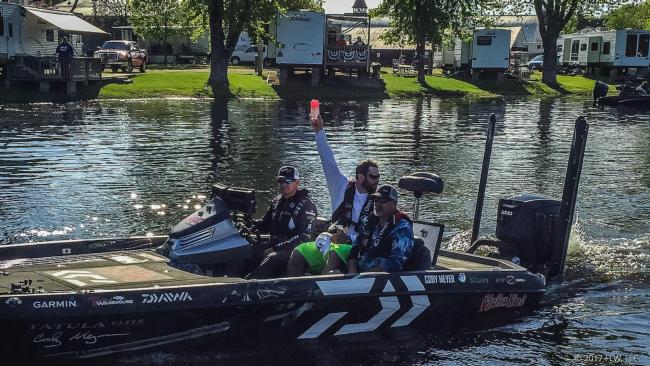 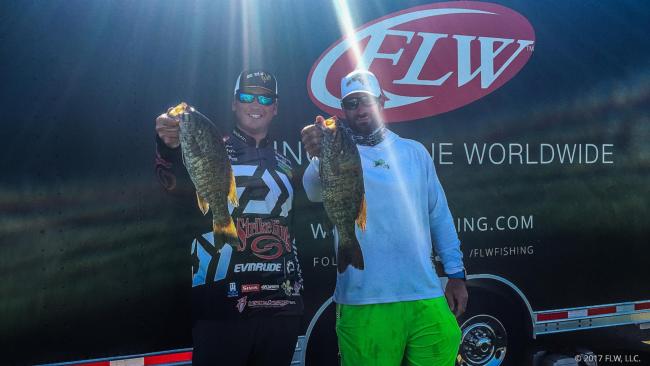 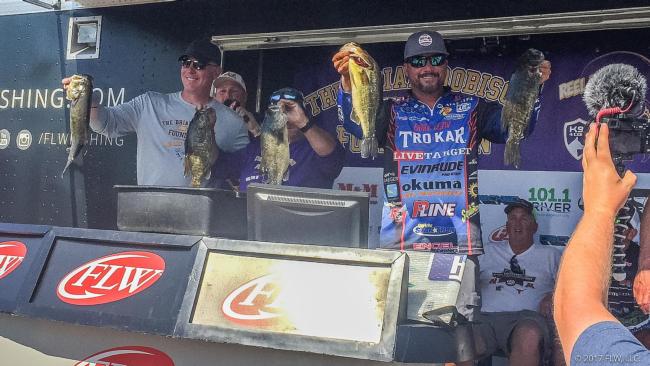 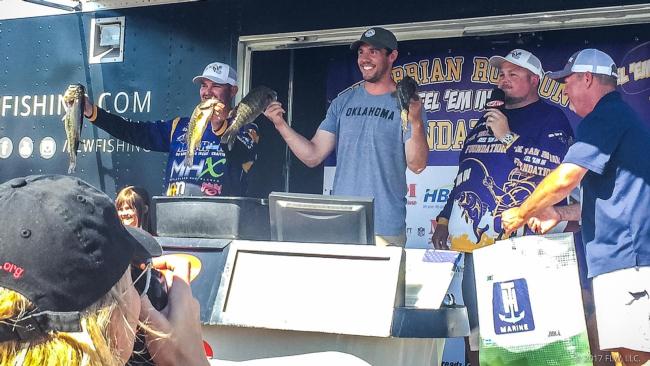 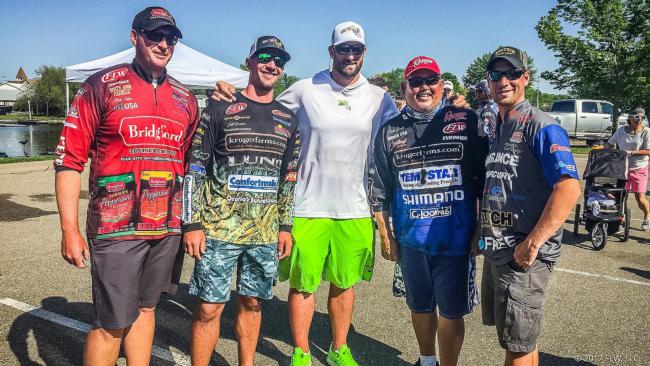 After the VIP tournament weigh-in concluded, the FLW Tour pros hit the road, heading 60 miles south to La Crosse to prepare for Sunday’s first day of practice for the FLW Tour event. Meanwhile, the “Reel ‘Em In” Foundation and the FLW tournament staff prepared for round two, an Open Tournament held Sunday. The tournament, with a $250 entry per boat, was open to all anglers and guaranteed a first-place prize of $4,000.

The Open Tournament was a big success, drawing anglers from across the Midwest to compete on the Mississippi River in Wabasha. After the last fish had been weighed on Sunday evening, the team of Cory Hauk and Mike Mattis took home the first-place prize with a five-bass limit weighing 18 pounds, 6 ounces.

Formed in 2015 by Minnesota Vikings player Brian Robison and his wife, Jayme, the Brian Robison “Reel ‘Em In” Foundation provides financial, emotional and physical support for those in need. The foundation’s mission is to positively impact those in need through partnerships with existing organizations in local communities in Minnesota and Brian’s home state of Texas. 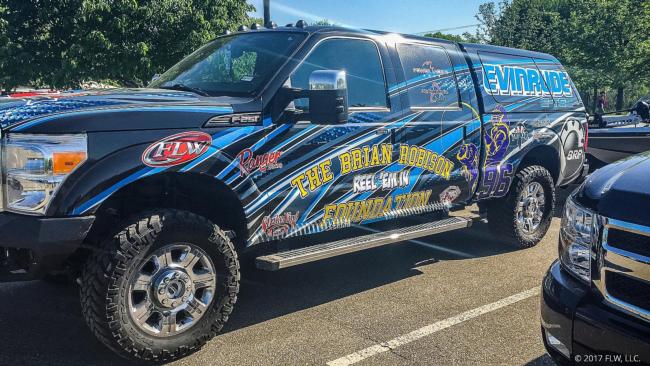 For the last two years, the Robisons have chosen to support K9s4COPS, a nonprofit foundation that provides canines to law enforcement agencies, school districts and college campuses across the United States. In four years, K9s4COPS has provided approximately 100 canines to 68 agencies and 12 schools across 28 states. Their dogs have helped make arrests and locate narcotics, explosives, weapons and cash. Not only do these highly skilled and trained animals provide invaluable detection abilities, but their diligent service allows their human partners to make it home safely to their families each night.

FLW wishes Robison and his Minnesota Vikings teammates the best of luck in their upcoming 2017 season. Skol Vikings!