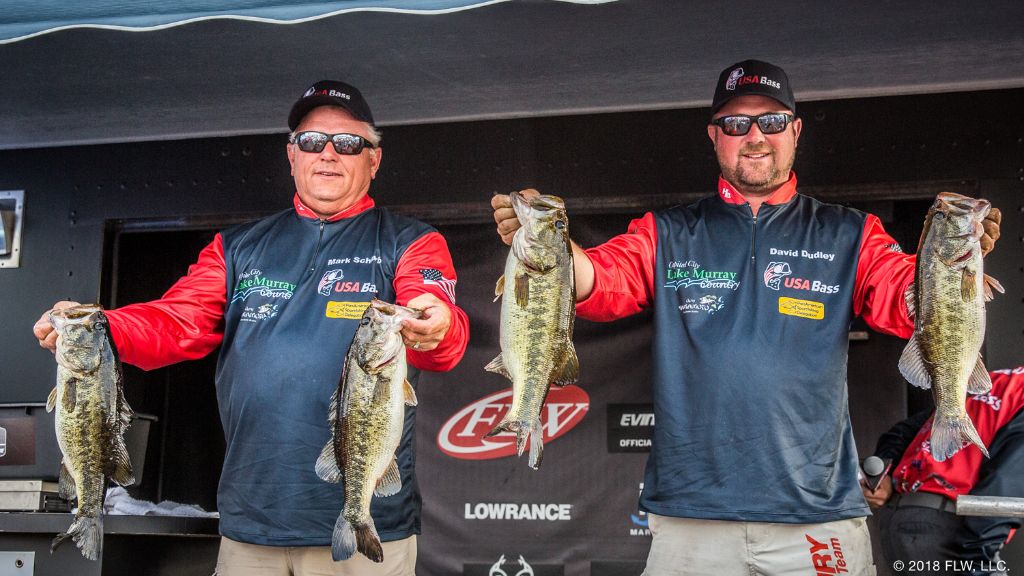 Florida-strain largemouth bass may leave David Dudley scratching his head from time to time, but the FLW Tour pro and his partner Mark Schlarb figured out enough of their fickle ways to take the day-one lead at the inaugural PanAmerican Black Bass Championship at Roland and Mary Ann Martin’s Marina & Resort on Lake Okeechobee. Their five-bass limit weighed 7.59 kg, or about 16 pounds, 12 ounces.

Sanctioned by the PanAmerican Sportfishing Delegation and hosted by USA Bass, a branch of United States Angling Confederation (U.S. Angling), the event is presented with assistance from FLW. Part of an ongoing effort by the Confederation Internationale de Peche Sportive (CIPS) to make bass fishing an Olympic sport, the tournament fields 22 teams of two anglers from the U.S., Canada, Mexico and Costa Rica.

Spending most of their day in a popular area known as the Monkey Box on the lake’s west side, Dudley and Schlarb targeted patchy pencil reeds and worked the cane edges. Their morning started slower than they had anticipated, given the week’s warming trend and stable conditions, but once they got into a groove, they were able to maintain a steady roll. 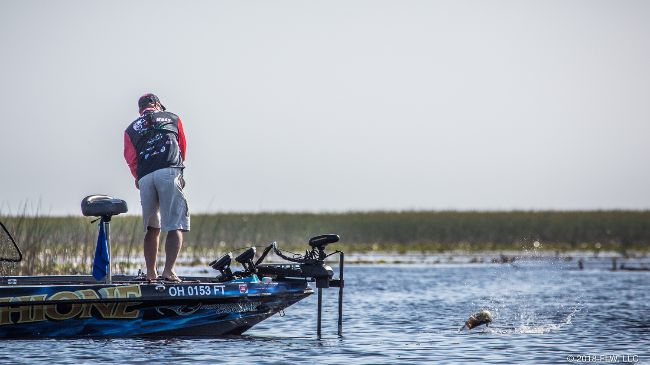 “It was fairly steady from 10 o’clock on,” Dudley says. “I don’t think we hit any big flurries; it was just nickel and diming the whole time.

“This is my 23rd season of tournament fishing, and I still don’t understand Florida bass. Today was the same weather, the same wind, the same, same, same, same as practice. But we go out there today, and it’s like a whole other monster. I’ll never understand these fish.”

Dudley says the day’s productivity was just about evenly split with 15 fish caught by flipping, 15 winding a Zoom Ultravibe Speed Worm and 15 on topwater.

“You could get them on bottom baits, and then you’d hit a lull, so you’d pick up a topwater and they’d start biting, but then you’d hit another lull, and I’d be like, ‘OK, something has changed,’ so we’d try a Speed Worm,” Dudley says.

Schlarb says this diversity ended up revealing a trend that yielded several consecutive bites for him.

“We really worked well together,” he adds. “While he’s doing one thing, I’m doing another. After I caught a few fish on the Speed Worm, David told me I wasn’t allowed to put it down. He said, ‘You’re not putting it down, and you’re fishing it all day tomorrow.” 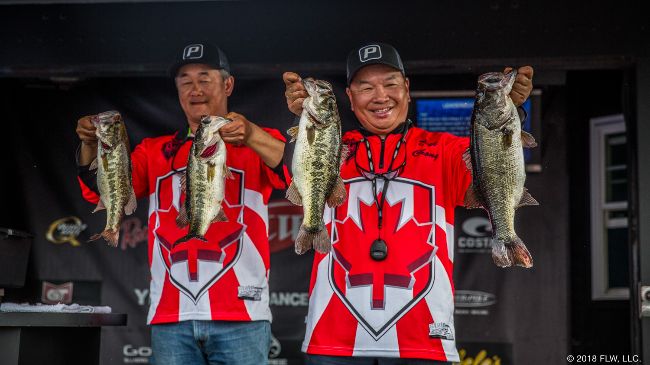 For second-place Canadians Rob Lee and Dave Chong, a limit catch of 7.48 kg (16-8) was the product of their resolute belief in their area. Fishing South Bay, they were not met with the cooperation they’d later experience, but sticking to their plan eventually yielded a productive day.

“The key probably was being stubborn,” Chong says. “We could have bailed on our area, but we believed there were fresh fish coming in, so we just stuck to it and they showed up. We got our better bites in the afternoon.

“I think this was due to a clearing trend. Because of the way the wind was blowing, the water where we were was actually getting clearer as the day went on.” 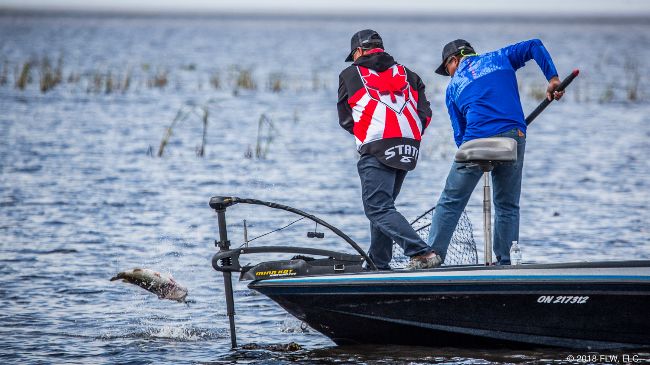 Expounding on his partner’s explanation, Lee says they expected the fish to be moving around in this time of prespawn and spawning. There was not a definitive line of water color; instead, it was a gradual progression.

“It wasn’t one specific water clarity level that was going to give us all of our fish, but I think it was more about waiting it out and sticking to what we definitely knew from our pre-fishing,” he says.

Lee and Chong caught their fish mostly on moving baits. Swimbaits, swim jigs, ChatterBaits and spinnerbaits produced for them.

“It was quite an experiment all day to find them, but we managed to get the ones we needed for now,” Lee says. 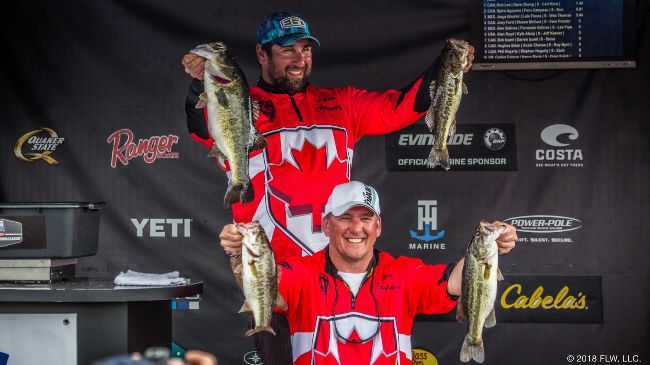 Agouros and Campeau swim to third

“Fern was on them really good this morning,” Agouros says. “It seemed like it started right off the bat, but then it died down around 9 o’clock. Around 11:30 to 12 o’clock, it started getting really good again, but it was very sporadic.

“It wasn’t like it was first thing this morning; it was one fish here, one fish there. We just followed our pattern from practice and got lucky and got one big fish.”

Campeau says the key to his team’s success was water clarity.

“We started in really dirty water and weren’t getting our bites, but when it started to change, that changed everything for us,” he says. “The hydrilla filters the water, and it changes the color. So when we found that and we stayed on that line, we did very well.” 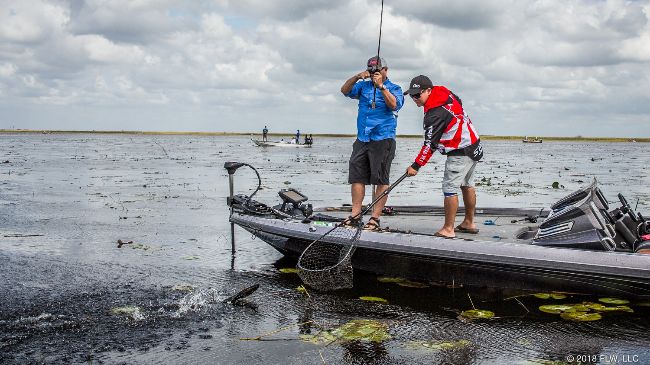 “All of our teams got in a fair amount of practice, and we compared notes at a team meeting after the first official day of practice,” Izumi says. “A lot of these guys I fish against in Canada, but it was really unusual to have eight teams, and all of us worked in concert together.

“We talked about areas, patterns, lures; we didn’t hold anything back. It really gave everybody confidence. For the most part, we all knew what everybody was going to do today because we all fessed up last night, and it worked out pretty well.”

The teamwork angle also rang true for 2016 Forrest Wood Cup champion and FLW Tour pro John Cox, who placed fourth with Keith Carson, despite having his day cut short by an engine failure that forced a boat switch. Distracted by the boat issue, Cox says the tournament’s team format left him and Carson with an outcome much different than he would’ve faced in individual competition.

“Keith carried us today. He got the bites, and I struggled today,” Cox says. “If this were a Tour event, I would have been in like 150th place. Keith was able to pick up the slack today and keep us in there for tomorrow, so this is an awesome event.” 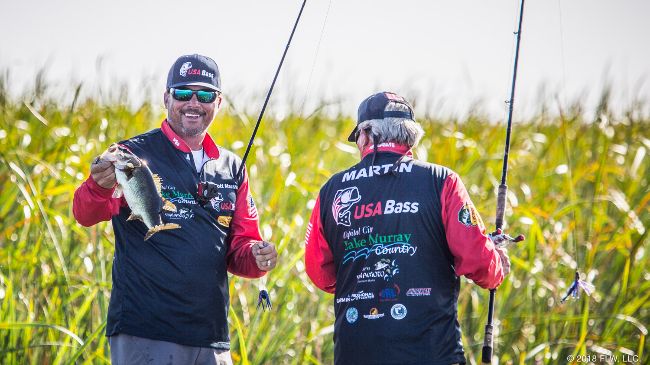 Past Forrest Wood Cup champion (2011) Scott Martin and his father, nine-time Bassmaster Angler of the Year Roland Martin, placed 10th with 4.97 kg (11 pounds). After a promising practice, the younger Martin says his home lake did not show her powerhouse potential, but could be in a more generous mood tomorrow.

“There are a lot of 2-pounders like we weighed in today, but to have that magical bag, you need two or three of those 5- to 8-pound fish,” Martin says. “We had a couple of those opportunities, but we kind of messed them up.

“But here’s the deal: You could easily get those bites tomorrow and have what we call a ‘mega bag,’ which is a 20- to 25-pound bag or bigger. I’m really shocked there wasn’t a big bag today, but that tells me those big fish just didn’t bite well today. These fish didn’t show out today, but tomorrow could be another story.”

The tournament continues tomorrow with a 7:30 a.m. ET takeoff at Roland and Mary Ann Martin’s Marina & Resort. The final weigh-in starts at 3:30 p.m. at the same venue.