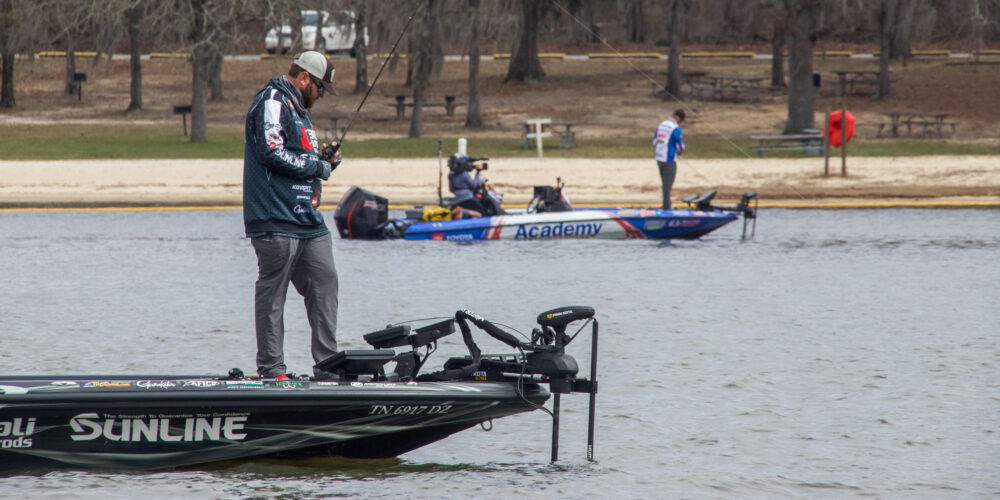 EUFAULA, Ala. – Constantly changing conditions proved to be a challenge for the 40 anglers fishing Lake Eufaula last week at REDCREST 2021, but the most successful anglers adapted each day to fluctuating water temperatures, levels and clarity.

During the Knockout and Championship Rounds, it became clear that throwing reaction baits while watching forward-facing sonar was the strongest pattern of the week. That approach was key for REDCREST 2021 Champion Dustin Connell and the second, third and fourth-place finishers.

Like Connell, Tennessee pro Michael Neal adapted his pattern all week before settling in with a jerkbait while scanning brushpiles with forward-facing sonar.

Neal pulled off two separate dramatic last-minute catches at the end of the Qualifying and Knockout Rounds to advance to the Championship Round.

“The first two days of competition, I was cranking roadbeds and points and then went shallow,” Neal said. “I caught some cranking and some on spinnerbaits, but every pocket I started to go into had tons of boats and I decided to fish how I like to – offshore – for the rest of the tournament. All I knew to do was run brushpiles.”

Neal started the Knockout Round fishing a 1-ounce spinnerbait on the offshore brush before switching to a jerkbait.

“I started with a spinnerbait, but it got calm and I figured out they would chase a jerkbait,” Neal said after seeing fish following his bait on his sonar. “You had to trick them to bite when they were following it. If you used a steady cadence, you might catch one occasionally, but you had to adjust your retrieve to get them to react while watching them on your electronics.”

Neal focused on the southern section of the lake from Pataula Creek to the dam. His key brushpiles were between seven and 13-feet deep.

“I believe those fish were pulling up on that brush because it was the halfway point for them,” Neal said. “It was between where they are in the winter and where they go to spawn.”

Jacob Wheeler, last year’s Stage One winner on Lake Eufaula, ran offshore structure at REDCREST just like he did during his 2020 win. The key for him was adjusting his bait selection as the tournament progressed.

“The first day of the tournament, I was catching them on a jig,” Wheeler said. “Every once in a while, I’d throw a jerkbait and see them following it on my Lowrance ActiveTarget. The second day of completion, I caught a 5-pounder on the jerkbait and started to figure it out and realize that (the jerkbait) was the deal.”

He targeted rock, brushpiles, and also fish suspending around baitfish.

“If I saw fish suspending around baitfish, I would get the jerkbait below the baitfish to get them to react,” he said. “You could pull them off of the rock if you could get them to react. It was the same thing with the brush – Eufaula has more brush than anywhere I have ever seen.”

Wheeler said he had as many as seven different jerkbaits on deck at a time and would fish them based on the conditions and depth to get fish to chase his bait.

“Sometimes you wouldn’t see the fish on ActiveTarget until you pulled a jerkbait over the rock or brush,” he said. “Then you would see them on your screen coming for it.”

Wheeler targeted the southern end of the lake and focused on water between 6 and 15 feet deep.

“I believe these were all bass staging and waiting to come to the bank to spawn,” he said. “It warmed up so fast that I kept thinking they would be on the bank spawning, but it never transpired.”

Zack Birge kept his eyes on his electronics all week long, visually targeting bass he saw on his Lowrance ActiveTarget.

“I kept it pretty basic and fished brush in 8 to 15 feet of water all week,” Birge said. “A white 3/4-ounce spinnerbait was the main deal, but I caught my two biggest fish on the last day with a 5-inch swimbait.”

The key for Birge was seeing how the fish were positioned around the brush.

“There were tons of fish around the piles, but not all of them would bite,” Birge shared. “The fish that you could see sitting above the brush would bite it right away. There were some fish I saw on the bottom or in between the brush and those were a little harder to catch, but every now and then you might get one.”

David Dudley can claim to be the highest finisher who did not rely on forward-facing sonar at REDCREST, and his approach was about as simple as they come.

“My goal was to fish as many docks as I could,” Dudley said. “I had one bite in practice and because we were just limited to one day of practice, I told myself I’d go skip docks if all else fails, and that’s pretty much all I did.”

Dudley did get a few fish cranking a shad-colored crankbait on rocky points between the docks, but skipping a wacky-rigged soft stickbait was what got him to the Championship Round.

He focused on main lake docks near the dam at the lake’s southern end.