RUMBLE ON THE RIVER: Brace Yourselves for a Battle Royale in Stage Five Championship Round 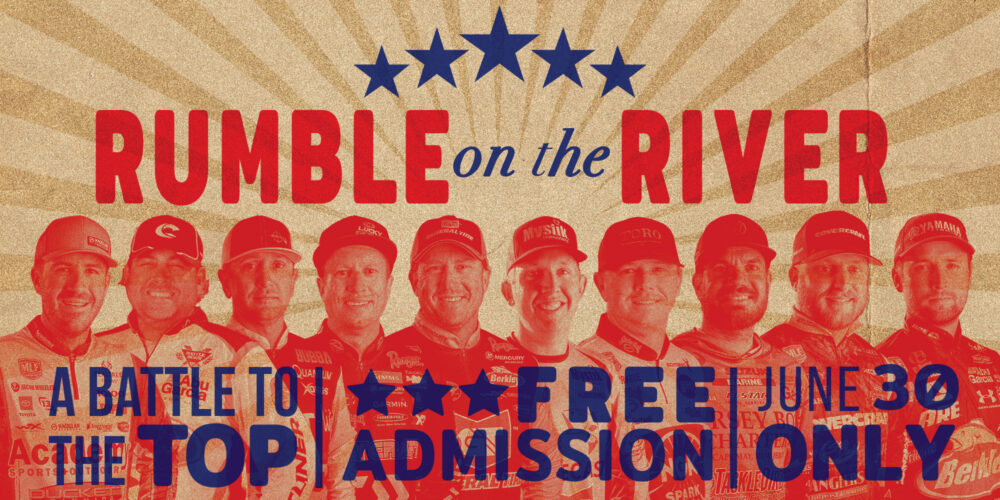 The Top 10 have punched their tickets to the General Tire Stage Five Presented by Berkley Championship Round.
June 30, 2021 • Joel Shangle • Bass Pro Tour

MASSENA, New York – When the 2021 Bass Pro Tour schedule was released in the fall of 2020, most bass pundits pointed to the late-June tournament on the St. Lawrence River and uttered a collective “Hmmmmm.” Scant information on the June smallmouth fishery on this drainage of Lake Ontario existed outside of St. Lawrence County, New York, because none of the major national tournament organizations had been there before July.

Turns out that “Hmmmm” doesn’t even begin to cover it.

Just one day into General Tire Stage Five Presented by Berkley, the world learned what a true heavyweight smallmouth fishery the St. Lawrence is in June: 2,898 pounds, 8 ounces of scorable bass made it onto SCORETRACKER® on Day 1, including an astounding 165-1 by Jacob Wheeler.

The four days that followed produced more heavyweight fireworks – a 6-13 for Justin Lucas, 16 fish over 6 pounds, 20 anglers with 100-plus-pound individual days, and a final-hour free-for-all in the Knockout Round.

With a Championship Round field that includes two Angler of the Year winners, three Forrest Wood Cup champions and two Bassmaster Classic titleholders, viewers watching the MLF NOW! live stream on Wednesday should be ready for the “Rumble on the River.”

Wheeler On One End, Cox on the Other

The Group A and B Qualifying Round winners couldn’t have been more different in their approaches to the St. Lawrence. Jacob Wheeler made an 80-mile beeline for the western edge of the competition boundaries near Lake Ontario, where he went to work with a flogger and a drop-shot for bedding smallmouth. John Cox, meanwhile, puttered five minutes out of the takeoff in Massena and fished his way around the uber-shallow, gin-clear water of the islands above Massena Dam.

Spohrer Creeping up on AOY

A quick cruise through the career results of Louisiana pro Gerald Spohrer won’t reveal much about his smallmouth proficiency (he has two Top 10s on smallmouth fisheries), but there’s no arguing with the 130-8 that he landed in the Knockout Round.

Spohrer has quietly stitched together a strong 2021 season – strong enough that he’ll climb into the Top 5 of the 2021 Angler of the Year race once the points are all tallied from this St. Lawrence tournament. Spohrer will be fishing his third Championship Round in five regular-season events in 2021.

We’ve written about this all week long, but what IS it about these West Coast anglers and Great Lakes smallmouth? Brent Ehrler has put the most smallmouth on SCORETRACKER® this week with 312 pounds over three days. Betting against Justin Lucas in a Great Lakes smallmouth tournament is a fool’s wager right now (he’s won the last two tour-level events he’s fished on big Northern waters). And Skeet Reese has seven career Top 10s on smallmouth-dominated fisheries (plus an MLF Cup win on the Great Lakes).

If you follow Toro pro Jeff Sprague’s social media, you may have noticed him admit in an Instagram post last week, “I need to learn more about these brown beauties,” in reference to smallmouth. But three seasons into his Bass Pro Tour career, Sprague has proven to be a consistent threat to win, regardless of geography or species of bass.

Bradley Roy on a Roll

Kentucky pro Bradley Roy enters the second half of the 2021 season with some momentum: he earned a $10,000 check for his 21st-place finish on Lake Chickamauga and was one of 20 anglers to register a 100-pound day in Qualifying/Knockout competition this week.

If you didn’t know better, you might assume that Alton Jones Jr. would be “just okay” at catching smallmouth. What business does a pro from Central Texas have catching almost 150 pounds of smallmouth in a day and flogging his way into the Championship Round, anyway?

Alton Jr. spent the bulk of his childhood traveling the professional tournament trail with his dad Alton Jones Sr., and watched Senior rack up multiple Top 10s on smallmouth fisheries in Michigan, Minnesota and Wisconsin. More importantly, Junior’s had a smallmouth rod in his hands since he was a child: The Jones family has vacationed around the Great Lakes for years, specifically because of the smallmouth fishing. Don’t sleep on Junior on Wednesday.

Adrian Avena finished up the Knockout Round with three chunky smallmouth – a 4-13, 5-0 and 4-1 – in the waning moments of competition, jumping from below the Toro Cut Line to sixth place in the final 29 minutes. Although Avena’s best career success has come on the Potomac River, where he’s racked up multiple Top 10s, he’s an excellent smallmouth angler with a handful of additional Top 10s in Northern fisheries where the brown bass dominate.